It is an overcast Friday in mid-October as the Cardiff University contingent (that’s us!) pull up outside a rated-but-dated business hotel in Newport; we are attending the #KeepingItReal conference for teenage girls, run by the South Wales charity Full Circle, who seek to support aspiration in young people, and as we find our way into the conference suite the atmosphere of excitement and enthusiasm is already building. A large room is decked out as if an awards ceremony is about to take place, with over a dozen huge round tables, bedecked with linen and festive balloons, arranged in front of a stage where a sound check is underway. The walls are lined with exhibitors from local charities promoting sexual health, domestic violence services, and education opportunities, and what we thought to be a big purple bouncy castle in the corner turns out to be an inflatable ‘Big Brother Diary Room’ for the teenage attendees to record their thoughts about their lives and the conference away from adult eyes. No bouncing for us then, we sigh, and set up our stall nearby.  Filling the table with pamphlets and adverts for our gender and sexualities research group, we also lay out our GEA leaflets and journal copies, later eagerly seized by both teachers and charity representatives alike.

Soon enough a steady stream of uniformed girls starts filtering into the room, gasping with excitement at the glamorous set-up and hurriedly finding themselves seats. The day is packed full of speeches and Nikki Giant of Full Circle is keen to get started. She introduces the day with images of new TV series The Valleys, Barbie dolls, and female pop stars flashing up on the big screen behind her and emphasises the harm that such cultural phenomena can do to the self-esteem and happiness of women and girls, insisting that it’s up to them to make a difference by ‘keeping it real’.

The main intent of the day seems to be to inspire the girls both to try and fight back against gender roles and expectations that might be hampering their success, and also to raise their confidence in multiple 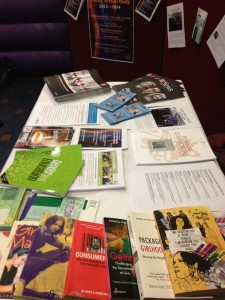 ways. The various speakers who are welcomed onto the stage all try in one way or another to achieve one of these goals: Yvonne Biggins from Movellas online writing community announces a competition for young writers; Zara Davis, world champion windsurfer, encourages her audience to take on new challenges; Jon House (a man!) performs a brief keynote with his recommendations for getting ahead in the world of work. However, the most inspiring talks are given by young girls themselves.

Jessica Jones, the 18 year old ‘Young Engineer of the Year’ from Cardiff, shares her story of pursuing her passion for physics that led to her being the first woman to receive the award at just 17! Then two groups of girls from local schools present their thoughts and feelings about ‘keeping it real’ through multimedia presentations, including one group who wrote and performed a pop song!  These go down well with the audience, and then it’s time for our very own Emma Renold to introduce ‘Everyday Feminism’, with a presentation packed full of more feminist resources and inspiration than you can shake a stick for the girls to explore. Direct action and activism are highlighted in particular, including the global Slutwalks, and the next presenters onstage provide a living illustration of this with an excellent example of everyday feminism in action:  Merched Mentrus (Welsh for ‘Girl Power’), a society from another local comprehensive, come on stage to talk about their numerous achievements both inside and outside their school and to share their experiences of ‘doing’ feminist activities as teenagers. Inspiring and humbling stuff!

After a quick break (during which dozens of girls flock to the diary room in giggling groups to record their comments with ‘Big Brother’) it’s time to split up the teens and teachers. Two sessions for the girls run simultaneously, with a vibrant and compelling presentation from Natasha Devon of Body Gossip about the messages found in advertising and how they might be affecting our body image, alongside a workshop run by Women’s Aid, in which, using examples of celebrities, it is discussed what constitutes an abusive relationship.

Meanwhile, Emma runs a workshop for teachers in another room which facilitates a discussion about ’sexualisation as an equalities issue’. Participants welcome the opportunity they are given to share their thoughts and experiences relating to phenomena such as ‘sexting’, 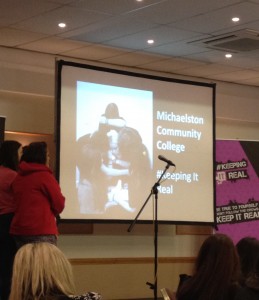 which many say is a common cause for concern for their pupils. This is followed by a focussed discussion about how sexualised culture is often actively resisted and negotiated by young people, and how gender, class and religious background all affect its impact on young people’s lives. A second workshop for teachers is run by Ellie Harwood of Chwarae Teg, in which it is discussed how fair the future is for teenage girls today.

The day concludes with a rallying speech from Leanne Wood of Plaid Cymru who wants to encourage the girls to take an interest in politics as a way of ‘keeping it real’.  Then there is some quick ‘role-model speed-dating’ which we take part in, moving quickly around the tables of girls. Ostensibly we are meant to discuss our own stories of success but we all end up just asking the girls for feedback on the day. Responses are mixed; many respond positively to the messages of some presenters and seem pleased at the interest being taken in their well-being, but a reoccurring criticism is that this has been yet another day where teen girls have been talked at a lot about what they should and shouldn’t be doing, but no-one has been asking for their opinions.

If we are going to truly value our teenage girls and the contributions they have to make, listening is what we need to be doing. Though this was a wonderful day in many ways, I personally (and at least some of the target audience it seems) would love to see more workshop-style sessions that provided a platform for all voices to be heard. For a teenager with low self-worth and difficulties with confidence, someone paying attention to them as an individual might be the best way of all for them to keep it real.