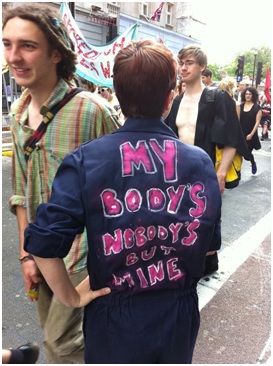 I am still on a high from the London SlutWalk, June 11, 2011.  It was incredible to see all those women, girls, boys and men, queer and straight, old and young, brown and white marching together under the banner of ‘sluts’.  There has been a lot written about the SlutWalks which have spread internationally in recent months, but the origins bear repeating; particularly given how the deeply misogynist, sexist remarks that propelled this political action emerged from a Canadian Police Officer at Osgoode Law school, York University, Toronto, where I did my MA and PhD in Women’s Studies! When Michael Sanguinetti a police officer from the Toronto force went on a routine visit to York University on January 24, 2011 to advise the students on personal safety, little did he know that he would unwittingly inspire a movement that has caught fire across the globe. Sanguinetti began his talk with a disclaimer “You know, I think we’re beating around the bush here” He went on to deliver the now infamous line “I’ve been told I’m not supposed to say this – however, women should avoid dressing like sluts in order not to be victimised.”

What I want to think about is how it is that Sanguinetti felt his remarks would be unremarkable? What culture of masculinity has he been immersed in that led him to believe this was a genuinely positive piece of advice for young women about their personal safety? A friend of mine did her PhD in the early 2000s on the Toronto police force highlighting its misogyny, and it is regrettable, indeed, that in 2011, we are still at the point that those in charge of enforcing the laws can feel confident in asserting that what girls and women wear holds the power to illicit violent sexual attacks from men. The great thing about Sanguinetti’s unfortunate comments, however, is the incredible international response that has emerged from this small, typically insignificant everyday moment. The SlutWalk movement illustrates how a small group of determined women can generate awareness that has grown into a tsunami of reaction and political resistance to a pro-rape culture that considers it acceptable to blame the victims of sexual violence.

What we still need to do, however, is unpack the logic that underpins Sanguinetti’s comments. Victim blaming is steeped in the cultural belief that women are the bearers of morality, and essentialised understandings that this morality is held within the female body (McClintock, 1992).

Placing us back into a fantasy about the ‘Neanderthal’ era, is the idea that somehow an electromagnetic or biological force will propel men to respond with crazed, hormonal sexual 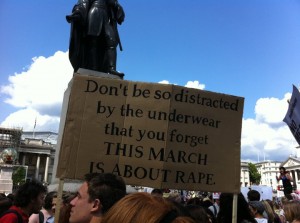 lunacy in the company of women. Thus we come to the juggernaut of sexual regulation over women’s bodies: when the female body is believed to be a tool of sorcery and seduction it is neither safe in the bikini where it is on full display or inside the burqa where it is fully veiled.

The SlutWalk turns this socio-biology misogyny on its head!  It pushes the gaze back upon the perpetrator, questioning the normalization and legitimisation of male violence.  To purposefully disrupt the normalising sexualising gaze upon the female body, the crowd at the SlutWalk dressed up in all manner of clothing from ‘sexy’ uniforms, to lingerie and nipple tassels as well as T-shirts, head scarves and boiler suits. Men donned bras and knickers, my favourite being the lad who squeezed his man-parts into a tiny pair of pants with ‘supergirl’ plastered across his butt, his hairy ass-crack on full view because the undies were, shall I say, a smidge small!

The placards and banners were truly staggering in their brilliance. A selection include: ‘slut isn’t an excuse for rape’, ‘rape is about power not sex’, ‘no entry means no entry’ graffitied on a traffic sign, ‘rapists rape people not outfits’, ‘it’s a dress not a yes’, ‘police look like sluts to uniform fetishists,’ ‘point the finger at the violent f**ker NOT the f**k me boots’, ‘stop staring at my push up bra and put that penis behind bars’, ‘my short skirt is not the problem’, ‘my vagina, my choice’, ‘Even if I dress like a hussy that doesn’t mean I want you near my pussy’, ‘This is not my ‘I want you’ face’.

My personal favourites, however: ‘stop thinking with your erection and attempt some self-reflection’, ‘consent is sexy’, ‘Hey Dorries I’m a slut and your one too’ (an ironic dig at the recent Dorrie abstinence for girls education bill), my friend Laura Harvey in a boiler suit with the words ‘my body’s nobodies but mine’ painted on her back. The guy with ‘feminism back by popular demand’ sign strung round his neck. Two teen girls with a giant ‘I don’t like Rohypnol’ placard, a young black woman with the poster ‘strong ladies united together’; two young men who were particularly savvy, having written ‘Love sex, hate rape’, and ‘respectful men are better in bed’ across their chests! Brilliant boys! And let’s not forget my own t-shirt designed by the amazing Emma Renold, which read: ‘F**k victim blaming, Stop slut shaming, It’s MY body not yours!’ (this final line was constructed by Emma’s 10 year old daughter!)

The ironic, sarcastic, plain brilliance of these banners, body art and graffiti thrilled me!  Suddenly feminism had become fun, dare we say ‘sexy.’  Boys were writing about how heterosexual 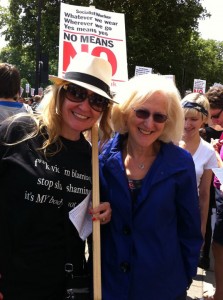 consent was sexy on their bare chests and what a turn on it was! From the postfeminism revulsion of dour feminists and feminism Angela McRobbie has documented so conclusively, had emerged this veritable plethora of witticisms about and deconstructions of sexual regulation! Indeed the trans-generational, trans-cultural, trans-gendered, trans-sexual solidarity of the event – the ‘pensioner sluts’ marching alongside the transvestites and the burqa clad bodies, heterosexual couples strolled alongside same-sex ones. Gay-ness, queer-ness, feminist-ness all proclaimed and coming together, pulsating, yelling, laughing as a united force – well it was something to behold!

Indeed, what was also so important about the SlutWalk is that, despite worries that it would end up a mostly middle class feminist march reminiscent of ‘take back the night’, with its typical focus on victimisation and usual splits between pro and anti-sex demonstrator (something discussed eloquently from a black woman’s perspective in an entry called ‘SlutWalks v. Ho strolls’ from the Crunk feminist collective blog) it was a decidedly diverse affair. The organisers and the speakers illustrated the intersectional and multipronged, coalition nature of the London SlutWalk.  This was not ‘single issue’ politics; rather it was supported and marched by anti-cut activists, the Socialist Workers group, peace activists, and development workers. Speakers included: the director of Gender Action for Peace and Security UK (GAPS), Chitra Nagarajan; Claire Glasman, a representative from Winvisible spoke about government cuts to the social welfare system, health, education etc. bringing these issues of class, gender and sexuality together.  Laurie Penny, a columnist for New Statesman, gave a provocative speech, countering opposition to SlutWalk, discussing fear of female sexual agency and sexual power. Kitty Richardson of Rape Crisis explored how ignorance can lead to mistreatment of rape victims.

Thus the SlutWalk seemed to create a force of solidarity BETWEEN differently raced and classed, girls and women. In particular by reclaiming ‘slut’ it is also refusing the destructing and projective force of ‘slut shaming’: that familiar form of sexual regulation that circulates between girls and women when they attack other women for dressing like sluts and whores to ‘get male attention’.  Often a thinly veiled attack at the attractive ‘assets’ of the girl or women in question, slut shaming is of course a deeply classed discourse, whereby associating said slut with prostitutes and whores her sexual value is to be diminished and kept in check. It is a deeply divisive politics I witnessed growing up and have seen re-enacted over and over again in my research encounters with girls in contemporary schools. Because I study and critique the developmental discourse of relational aggression between girls, this was perhaps the most poignant message of the SlutWalk for me. That we were standing together saying ‘We are all sluts now’! Whatcha gonna do about it?’

Is this then the new face of feminist solidarity? We will have to wait and see how this reclaiming of slut will pan out and work mightily to sustain some political movement around this cause. But if the fantabulous and hugely energizing force of Saturday’s march is anything to go by you have not seen the last of us sluts yet!