The UK government, following the lead of the US, is devising multiple ways to get more ex-members of the military into our schools – as teachers, mentors, classroom assistants and basic skills tutors. As part of the Free Schools initiative, the first UK school to be staffed entirely by untrained ex-military is set to open in Oldham in 2013. Educational charity SkillForce, with government support, launched its Military to Mentors programme in 2011. And, in the most recent move in this direction, English universities who are having their secondary teacher training places cut year on year, are being asked to bid for 50 shiny new places to turn Troops to Teachers of mathematics, physics, chemistry and modern foreign languages. As in the US, the launch of the Troops to Teachers scheme coincides with large scale cuts in military expenditure. Yet, this point rarely features in the rationale and publicity for the scheme – instead we hear about the need for discipline and role models in urban schools and about the skills which ex-servicemen and women bring with them. GEA’s view is that, in promoting military involvement in inner city schools, the government is implicitly, and sometimes explicitly, critiquing the quality and skills of our current schools and their teachers, is supporting stereotypes of ‘urban youth’ and is promoting a particular ideal of teachers and of education, based in militarist and masculinist values.

Jonathan Gilmore identifies Troops to Teachers as part of the nation’s current “love affair with the military”. Other manifestations of this include the now annual Armed Forces Day and the charity Help for Heroes. In the ‘battle’ for this year’s UK Christmas number one, a choir of military wives won out over the TV talent show X-Factor winner. And if you go to the young people section of the Department for Education website then the only two youth organisations listed are the new Big Society’s National Citizens Service and the military’s Cadet Force.

Tom Bukard (author of the 2008 Centre for Policy Studies Report Troops to Teachers) states that ex-servicemen and women possess skills of obedience, discipline, comradeship and teamwork. The Training and Development Agency for Schools website points to skills of communication, teamwork, leadership and training as well as “a firm grasp of how to behave in unexpected situations and an authority that will help you manage a classroom and be a role model for pupils”. While, many ex-servicemen and women will undoubtedly have such skills, the perpetual focus on discipline suggests that there is a discipline problem in schools which is not being addressed by current teachers and which military style discipline can address. Typically, Bukard writes: “Ex-servicemen are 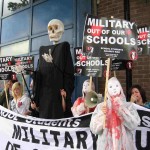 sure of their own moral authority and are not intimidated” (his emphasis). He clearly implies that current teachers are intimidated. The need for teachers to possess certainty in their moral authority is an unsubtly veiled attack on progressive/liberal/child-centred approaches to schooling. This is an attack that he makes more directly elsewhere in the report: “Enter “soldier-centered (or centred) teaching” in Google and you will not get a match.

“Unsurprisingly, the Army is not keen on letting recruits “investigate” hand grenades; nor does the RAF take a “learner-centred” approach to aircraft maintenance; and nor does the Navy’s submarine school “personalise” instruction to suit each midshipman’s “learning style”. … Rather than confusing children by presenting them with vague, open-ended learning objectives, you teach an orderly syllabus where knowledge and skills are well-defined and developed in a logical progression. Rather than ‘differentiating’ lessons for mixed-ability classes, you ensure that all pupils meet the same learning objectives. Rather than attempting to boost pupils’ self-esteem with indiscriminate praise, you build their confidence with honest achievement. Rather than blaming social or economic factors when a pupil fails to meet a learning objective, you break the lesson down into smaller steps.”

Here we can see that Troops to Teachers is part of a wider narrative that sees the problems in our schools and on our streets as caused by progressive, child-centred, liberal education, which has gone too far. Within this narrative, what we need is a return to a mythical past when order, discipline and adult authority defined schooling. This story sees looking to race, class, gender and other “social or economic factors” as an excuse used by poor teachers which can be addressed by “break[ing] the lesson down into smaller steps”. We need ex-military tutors who “are willing to persevere long past the point where a conventionally-trained teacher gets bored and gives up … [and] consistently succeed where specialists have failed”.

As well as an indictment of the skills and hard work of current teachers, Troops to Teachers also contains damaging stereotypes about urban youth. In his report, Bukard argues that these teachers would be trained to work in “high poverty, typically violent schools”. And Lord Guthrie’s opening statement to this report explicitly links the recruitment of ex-servicemen and women to addressing the “knife crime, drugs and violence in our inner cities” by providing “youths with role models who understand discipline and self-restraint at the time in their lives when they need it most”. Recent discussions of Troops to Teachers have focused on its role in fixing so-called “broken Britain” in the aftermath of the English Summer 2011 ‘riots’ and on specific concerns around controlling so-called-feral male youth, part of the wider moral panic about boys.

Although Bukard cites research that the gender of the teacher does not matter to boys’ and girls’ achievements and attitudes and says that “what counts is the type of person who becomes a teacher”, he, and other proponents of the scheme, deal in gender stereotypes. A selling point of Troops to Teachers is that, while most ‘normal’ 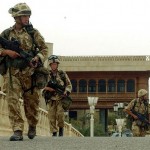 teachers are women, 88% of those going through the US programme are male. Bukard and others also speak of “the many children in our increasingly violent and unsafe schools who lack suitable male role models”. The mention of violent and unsafe spaces (a description akin to a warzone) again conjures an image of dangerous, inner city schools and suggests that men are (presumably biologically) better equipped to teach in such places. Bukard continues: “Even though the individual soldier may not actually be proficient in combat, unarmed or otherwise (soldiers from the logistic and support corps are often devoid of any of the martial virtues), it is the image that counts. Whether we like it or not, children from more deprived neighbourhoods often respond to raw physical power.”

Francis Gilbert asks: “Why troops?” – he suggests “Why not Dolphin Trainers?” And, why not other public sector workers who are facing cuts – social workers, civil servants, youth workers? Indeed, why not have people who have worked for nonviolent solutions to global conflict? Perhaps these professions are too associated with the liberalism that the government sees as responsible for “broken Britain”?

However, military training and life is, to say the least, a worrying model for education. Our education system should surely seek to develop critical thinking not obedience to the chain of command. Ken Loach’s epic 1975 TV Drama Days of Hope movingly depicts the brutality of the army’s treatment of Conscientious Objectors during the First World War when these men were subjected to humiliation, imprisonment and death sentences. More recently, there have been deaths of four soldiers at Deepcut Barracks between 1995 and 2002 and there are all too frequent reports of wartime torture, rape and abuse. These things are unspoken within the policy talk about Troops to Teachers as is the trauma often carried by people who’ve spent time in ‘combat situations’ – who have seen people killed and who may have killed others – and how this may play out within the classroom.

As Jonathan Gilmore suggests, rather than schools leaning from the military, military training could learn a great deal from our current education system. The recent Channel 4 Documentary Educating Essex, which follows 15-16 year-olds at Passmores Academy, a comprehensive school in South England, offers a helpful contrast. This is 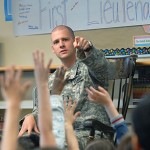 an open and honest look into contemporary issues in a school with a no-failure policy and a commitment to never permanently exclude any of its students. Pedagogy here is based on developing strong relationships of mutual respect between teachers and young people and working together so that students get the the qualifications they need to progress in life. It’s been slated by the right wing press for showing a lack of discipline among teachers and students, but for many it offers an example of a school staff who are hardworking, committed, sensitive and thoughtful about what they do. The teaching at Passmores, like all good teaching, involves discipline and structure. While these are important, they are by no means sufficient to ensure learning. Pupils also have to feel that they are valued and trusted which involves skills of caring and compassion as well as structure. Are we not storing up trouble for ourselves in the future if we provide young people with the message that the only place where they will be guaranteed structure and discipline is in an organisation which has honed some rather brutal pedagogic practices required to create persons capable of killing another human being?

2 thoughts on “Learned to Kill? Now Teach our Children: A Critique of Troops to Teachers”