The National Union of Teachers has been working with a small group of primary schools to challenge ‘traditional’ gender stereotypes through the curriculum.  As part of the support for schools, the project team provided them with a range of books featuring characters who defy some of the long established typecasting of girls and boys in children’s literature.  A full report will be published later this year but the project team have already produced notes on some of these books.  Launched at the NUT Annual Conference at Easter, they should help school staff, parents and carers to get the most out of reading the stories with children.

Readers of this blog will not need reminding how the persistence of crude gender stereotyping undermines attempts to address issues of vital concern to women and men including parenting, equal pay, domestic violence and sexual harassment – or how it constrains the life choices of millions and continues to undermine the self-esteem of people who are the targets of sexist, homophobic and transphobic bullying at school and beyond.

The ‘rules’ about which toys, games, TV programmes and books are “for” girls or boys are learnt early and many of the producers of such products are happy to exploit them.  Children’s literature is one area where a small but significant counter movement is gathering strength.  While many books still perpetuate stereotypes, there are increasing numbers of female characters who would rather do something useful than dream about being a princess or males who are more interested in singing and dancing than making the first team.

There is still some way to go.  Until recently, if you could even find books featuring same sex parents, they would often be about little else – as though just having two Mums was interesting enough to be worth reading about.  While some of these books were welcomed by families and used by teachers in discussions about different family structures, they still tended to affirm that, while it was OK to have parents of the same gender, it was still unusual, difficult or likely to lead to problems.  Similarly, many of the books about children who challenge gender stereotypes 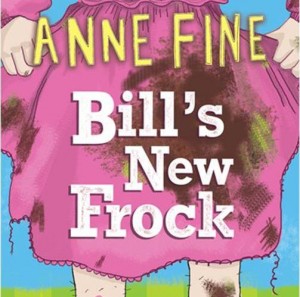 feature one child who does and many who don’t – as though being constrained by such values is somehow abnormal and not likely to be an issue for most of us.  In addition, the girls in such stories are often narrowly defined as conventional ‘tomboys’ – with their rebellion being confined to the rejection of traditional activities and dress codes – and the boys are frequently as concerned with being FABULOUS as they are with being nurturing or creative.  In other words, they can contribute to the creation of new stereotypes just as they aim to challenge old ones.

However, just as sexual orientation is now being addressed more engagingly in children’s literature, writers are also taking an increasingly subtle and nuanced approach to gender.  Anne Fine’s Bill’s New Frock engages with a range of ways in which children of both genders can be stereotyped – without their even realising it is happening – and Robert Munsch’s Paper Bag Princess learns as much about the kind of relationships she wants as she does about the excessive importance many in society place on ‘appropriate’ daywear.  Both these characters have been favourites in schools for some time and they are now being joined by other heroes (of both genders) who challenge stereotypes and yet seem remarkably like ourselves.  The message that we shouldn’t be unkind to people who are different from us is still there (as it needs to be) but, these stories imply, any of us could find ourselves constrained by the ‘rules’ linked to gender – any of us could be ‘different’.

While not all the books discussed in these notes entirely avoid portraying children who challenge stereotypes as ‘special’, they all present them as people any of us would like to know – or even be.  The stories also help us to understand that people are discriminated against not because they are different – but because other people sometimes find difference a challenge.  Moreover, they show how difference – and knowing things that others don’t – can be a source of strength as well as difficulty.  Harvey Fierstein’s Sissy Duckling, for instance, teaches us that caring about being good at what you want to do – rather than what others think you should be good at – is one of the key ingredients in the recipe for happiness.

As part of the lessons delivered by teachers and other staff involved in the Breaking the Mould project, these books and others were used to help children to consider the impact of stereotyping, the value of celebrating difference, the importance of questioning convention and, as the children themselves put it, of  “being your own person”.  The full report will appear in a few months but, in the meantime, these notes should introduce school staff, parents, carers and – most importantly – children to some feisty characters whose actions contribute to breaking the mould that many of us still feel under pressure to fit.