This month has seen the release of the hotly debated film Made in Dagenham. This is a film which recalls the events surrounding the 1968 strike by the women sewing machinists at the Ford plant in Dagenham, London. The film was produced by Stephen Wooley and Elizabeth Karlsen in conjunction with BBC films and was directed by Nigel Cole (also known for his direction of the popular film ‘Calendar Girls’). At a recent London Feminist Network screening of the film, the film’s producers Wooley and Karlsen claim that the original idea for the film was first developed over four years ago. However, they explain that the film was unsuccessful in gaining funding at this time because there appeared to be very little interest in feminism or on issues relating to equal pay.

Given the film’s coincidence with the 2010 Equality Act and the recent budget review, it has been the subject of many a media debate. At a time when the Fawcett Society (a high profile women’s lobby group) has announced that the average working woman is paid around 17% less an hour than her male equivalent, and that 5 billion of the proposed 8 billion pounds made in revenue from the emergency budget will come from the pockets of women, it seems that the film serves as a timely reminder of these age-old feminist arguments.

Indeed, the Fawcett Society is taking the notion of equal pay so seriously, that for the first time ever (and they have been around since 1860), they will be taking legal action to achieve governmental recognition that the budget is unlawful and serves as a threat to women’s rights. Making the case that we still have a long way to go, even despite the triumphs celebrated in the Made in Dagenham film, Ceri Goddard (Chief Executive of the Fawcett Society) claimed in a recent interview that

‘Women’s rights tend to be at best on the margins, and actually we are over 50% of the population. It’s not just gender blind. I’d say it’s actually gender regressive’.

In a recent Guardian article two well-known feminists (Germaine Greer and Beatrix Campbell) were also asked to comment on how far they believe British society has come since the Dagenham strikes. Both Greer and Campbell were decidedly optimistic about the messages that they felt could be gleaned from the film and in relation to the impact that they think it may have on young women. 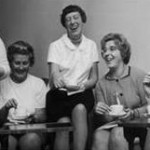 being disappointed by the apparent lack of consultation with the ‘real’Dagenham strikers (who, she claims, say they had far too much self respect to sit around in the factory in their bra and panties), with the glamorisation of the women (having been replaced by much younger, heavily made-up and scantily clad actresses) and the fact that film does not accurately portray how the strikers’ arguments moved from a focus on skill to one of equal pay, she still claims that:

‘Our hearts should leap when we behold a film like Made in Dagenham’ as it is ‘meant to inspire today’s young women to continue their mothers’ struggle towards the ever-disappearing will o’ the wisp that is equal pay’.

Campbell is equally upbeat about the film, largely because she appears to be passionate about the social class issues that it raises. Confident that it is a powerful force she claims that:

‘…Feminism is stirring again and the chronicle of those nice, dangerous women is being aired all over the lace…They are a reminder of what could have been: a labour movement in the image and interests of women. Revolutionary’.

Made in Dagenham has also recently been the subject of discussion in a recent Radio Four broadcast: ‘Whatever happened to the Sisterhood’. Both the transcript of the show and the broadcast itself can be found online and are certainly worth a look/listen. For those interested in gender and education, the debate centres round a discussion of the role that feminism plays in young women’s lives and of the gendered restrictions that young women face in contemporary times. Jessica Ringrose, a member of the Gender and Education Association, was an invited guest on the programme and spoke at length about her recent research which focuses on how girls present themselves on social networking sites. Ringrose outlines the pressures relating to, what she calls, the ‘pornification’ of society but also makes a call for girls’ pleasure and desire to be found a space within the sex education curriculum.

Although not addressing the concerns that Ringrose raises, the film education website has recently released a number of resources which can be used by secondary school teachers in conjunction with the Made in Dagenham film. These include activities which can be used in citizenship, media or history lessons. Not only do these resources seek to encourage discussions about women’s rights and equal pay, but also to explore the other more subtle forms of gendered discrimination that women may face. The media lesson plan, for example, asks students to discuss the status of women in society during the 1960’s and to watch a clip of the film in order to consider how the strikers were being positioned by the male union representatives.

Perhaps, Campbell is right. By using these resources in schools, youth clubs and universities maybe we can stir up activism and a renewed interest in feminism? We would be especially interested in your views of the film and of these resources – are they useful tools with which to continue these discussions in schools? Post your comments on the discussion board below.

One thought on “Made in Dagenham: Made for Feminist Discussion in Schools?”