‘Clinton is proving that feminist foreign policy is possible – and works’ so headlines an article in the Guardian in which Madeleine Bunting argues that Hilary Clinton is building her political foreign policy on a solid 1970s feminist mantra that ‘Transformation in the role of women is that last great impediment to universal progress.’ Clinton has proclaimed that ‘the rights of women and girls are now core to US foreign policy’ and Bunting draws attention to the 450 mentions of this ‘signature issue’ in the first five months of Clinton’s office.  Clinton argues that ‘the empowerment, protect and protection of women and girls is vital to the long-term security of the US’.  In a telling remark Bunting asks, imagine any politician saying something similar in the UK now. It is, indeed, unimaginable!

Links have been drawn between, for example, gross gender inequality and political extremism.  Women produce most of the food that feeds the world and are therefore critical in issues of food security.  Women are the key workers in education, health and so democracy.  Bunting reminds us that the World Bank picked up on this agenda some time back. Clinton illustrates the abstract idea that women are key to global development and peace during her foreign visits.  She has argued that sexual violence is a weapon of war, an issue made concrete while talking to women rape victims in the Democratic Republic of Congo.

Other recent stories in the Guardian tell us that the age of young people found to be victims of sexual grooming has fallen from 15 to 13 years. Alexandra Topping summarises the main findings from the Barnardo’s  report published today, ‘Puppet on a String’.  ‘Trafficking is becoming more common and sexual exploitation more organised’. Organised groups are using multiple technologies, including mobile phones and internet sites to ‘control’ victims. The ‘boyfriend model’ in which a younger man flatters and befriends a vulnerable girl locking her into a relationship is used to introduce her to networks of older men and force her to have sex with them. Posting explicit sexual images of her can then be used to blackmail and further control her. Boys are also vulnerable to these increasingly sophisticate techniques.  As we close down our public spaces, internet activities will increasingly take place in secluded places such as bedrooms, hidden from the public or adult gaze. While the few public places where young people can gather in safely 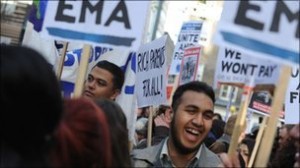 outside school such as youth centres and public libraries close, vulnerable young people will become increasingly disconnected from public participation. Withdrawing the Education Maintenance Allowance (EMA) for 16-19 year olds cuts off a vital lifeline into public institutions, that serve not only as places of education and training, but to keep young people connected to each other.  In another article, ‘Growth or Cut? Keynes would not back the coalition’, Larry Elliott warns that we are heading for a million under 25s being unemployed.

Unemployment massively increases dependency and in areas where generations of unemployment and disinvestment already exist, girls especially become victims of sexual abuse and exploitation perpetrated by increasingly organised groups.  The coalition austerity drive may well create a double dip in the economy, but no one has yet counted the cost of the double dip in the social fall-out that will ensue.  We need to revitalise the basic feminist message of the 1970s, with a new emphasis that ‘the empowerment, participation and protection of girls and boys is vital to the long-term security and prosperity of the UK.’  We need to get this feminist perspective back onto the political agenda. Feminists need to get involved in the ‘Fight back’ against the cuts and join with unions and other pressure groups to supplant the coalition boys’ austerity mantra with an established and mature feminist voice.