On the 15th October the End Violence Against Women (EVAW) organisation called upon the Coalition Government to urgently address the “alarming levels” of sexual harassment and violence against young women in schools. Their YouGov 2010 online survey of 788 16-18 year olds found that a third (29%) of young women reported unwanted sexual touching at school and witnessed routine sexual name-calling on a daily or twice-weekly basis. Over a quarter (28%) said they had seen sexual pictures on mobile phones at school twice a month or more. In the same month, Girl Guiding UK continued to fight the sexualisation of girl culture by delivering a 25,000 signature petition to Downing Street calling for the Government to introduce compulsory labelling for all airbrushed images. This concern addressed the findings from their Girls’ Attitudes Survey, in which 50% of the girls reported that they would consider having surgery to change their looks and more than half had been bullied for their appearance. Indeed, the impact of ‘sexualisation’ upon girls and young women has become the subject of high profile controversial reports and inquiries from a number of government and non-governmental bodies (Home Office 2010).

Unfortunately, the concerns raised by EVAW and Girl Guiding UK come as no shock to those of us examining gendered and sexual violence through research and/or professional practice. But they do perhaps present new challenges in a postfeminist climate where feminism sits uneasily alongside neoliberal ideologies and policies that both deny and acknowledge the effects of gender. Take a look at the new coalition governments approach to equalities, titled “political correctness won’t lead to equalities”:

“We need to move beyond defining people simply by their membership of a particular group. People are individuals.” (Theresa May, Minister for Women and Equalities, 17 November 2010)

Now take a look at the following commitment by the very same minister which does indeed foreground girls and women as a group that need protecting against violence: 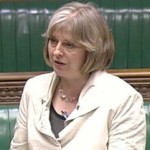 ‘As women and as a society we have made great strides but we need to do more to ensure that women and future generations are not held back. My ambition is nothing less than ending violence against women and girls and our strategy document will outline our commitments to seeing this become a reality.’ (Theresa May, Home Secretary, 25th November 2010)

One of the issues I would like to raise in light of the two reports and the wider contradictory socio-political context, is how to make sense of and combat the normalisation of real and symbolic sexual violence in an increasingly sexually saturated postfeminist society (Gill 2008).

The normalisation of sexual harassment and the objectification of girls bodies has a long an enduring history, from unwanted sexual touching to the widespread unreported verbal abuse such as calling a boy a girl – a practice which shockingly continues to retain its derogatory power, after decades of feminism. Indeed, the routinization of sexual harassment inside and outside dating cultures is now increasingly being recognised as a normalising feature of young girlhood as more studies problematise the assumption that connects sexuality with adolescence (Renold 2005). Locate these experiences with studies that suggest how hyper-sexy has become a performance routinely required by all young girls in order for them to just to count as ‘girls’ (Harris 2005; Gill 2008) and we begin to see the complicated terrain of what it means to grow up girl in the new millennium (see Gender in the Playground, FWord). On the one hand, some girls experience pleasure and wield some power in producing (and policing) their own and each others’ bodies as desirable heterosexual commodities. On the other hand we have girl’s negotiating the inevitability of routinized sexual objectification and harassment perhaps intensified by the young sexy female body.

Yesterday, marked the International Day for the Elimination of Violence against Women and saw the launch of the Coalition Government’s strategic narrative, “An End to Violence Against Women and Girls” which now includes commercial representations of the sexualisation of children:

“The communications we see around us on a daily basis can reinforce negative messages on the role of women and contribute to the excessive commercialisation and premature sexualisation of children. It is essential that we take steps to challenge these messages, demonstrate why they are unacceptable, and work to put positive models and messages in their place”

So what might these ‘next steps’ look like? I would be interested in debating with Gender and Education readers how parents and those working with children might challenge the contradictory messages that girls must now negotiate? For example, do we ‘challenge’ girls’ desire to look and feel ‘sexy’? How do we support girls’ sexual desire and pleasure within a context of routinised sexual harassment? Are girls becoming further victimized by their own sexual ‘agency’? To what extent does this paradoxical world of girls as sexual subjects and objects effect girls differently when location, class, ethnicity, religion age and other differences that make a difference are taken into account?

Let’s take an example. How do we make for a more complicated reading, of little girls’ desires to look like their favourite Bratz doll and dress-up sexy for the school disco?  Do we understand the little girl’s desire to look sexy as a form of post-feminist girl power chic? Or do we interpret this as part of the everyday cruelties of being a ‘normal’ girl, where projecting a sexually desirable body is just as much about protecting herself from the threat of social exclusion from her girl-friends as it is about her claiming sexual agency and power (Bray 2008)? Moreover, how do girls and those working with girls address the competing pressures to be ‘sexy’ with the routine heterosexualised harassment experienced in the social world of schooling and beyond? I look forward to receiving your comments below

One thought on “Are girls victims of their own sexual agency? Sexualisation, sexual violence and schooling”