This year will mark 100 years since the suffragette Emily Wilding Davison was killed after running in front of the King’s horse at the Derby. A campaign has just been launched to institute a minute’s silence at the Derby in memory of her sacrifice for women’s rights and democracy.

Emily is just one of many women who fought to get women the vote. Emily was a teacher and a courageous activist during her life.

Emily’s actions were key to raising the profile of the suffragettes and their cause. Without our campaigning predecessors, we would not be in a position today to exercise the vote and take part in public life to address the barriers and inequalities still facing women at work and at home.

One hundred years after Emily’s death, the fight for women’s equality has not been won. Women continue to:

80 per cent of ministers and 65 per cent of Whitehall are male, with a current cabinet made up of 19 men and just 4 women.

The under-representation of women in government is not a side issue. It is a pressing issue given the government’s drive to downgrade equalities structures, remove accountability and weaken the legal duty on public authorities to proactively advance gender equality. Just recently the government ‘called time’ on equality impact assessments, in favour of allowing ‘smart people in Whitehall’ to make decisions. Equality impact assessments – now under threat- are necessary for assessing the impact of government policies on women and to challenge “one size fits all” policy making. 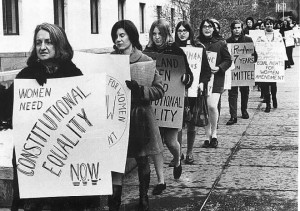 This is particularly concerning when government policy is being made with reckless speed and handing down record public spending cuts, in which women seem to be an after-thought. Pitching equality against growth is hugely irresponsible especially in times of economic slowdown. It also flatly contradicts the government’s own stated policy that more not less equality between women and men is key to economic growth.

One in five women retiring this year has no pension and a quarter think the state payout is worth more than it is.

Be inspired by Emily and let’s use our votes

The good news is that today women are showing the value of the hard-fought vote all over the world.

In the recent presidential elections in America, single women voted overwhelmingly for Obama against a backdrop of outdated pronouncements made by republicans on rape, abortion and family life. These included prominent US Republicans saying ‘’some girls rape easy’’ and ‘’Rape, ladies and gentleman is not today what rape once was. Rape was the violation of a chaste women, against her will, by some party not her spouse’’.

As Obama said on the stump: ‘’Don’t boo: vote. Voting is the best revenge’’. That 68% of single women (according to exit polls) voted to stop Romney is a decisive moment. Women won the vote for Obama. We need women in the UK to hold British politicians- male and female- to account for the decisions they are making about women’s lives. Let’s remind women of the power they have.