The 10th of November 2010: I and 50,000 school, college and university students and staff gathered in central London to protest against the Tory-Lib Dem coalition government’s proposed cuts to education and rise in tuition fees up to £9000 per year. This placard – Don’t Cut Women out of Education – was left under the feet of the demonstrators, washed up by a tide of protest: one of a vast range of slogans on show, from the ironically knowing to the straightforwardly angry. But its message stands. Those who stand to lose out from the government’s plans are, overwhelmingly, those who already lose out.

The Fawcett Society is seeking a judicial review of the coalition budget, for not considering the gendered effects of their planned cuts to welfare and the public sector, which Fawcett argue will have a disproportionately negative impact on women. The education cuts are no exception to this rule. The subjects which have been deemed irrelevant and unnecessary, their teaching support withdrawn, are those which are disproportionately studied by women: arts, humanities and social sciences. The enduring gender pay gap puts women at a further disadvantage. Although graduates in lower-paying jobs will not be required to start paying back their loan until they earn £21,000, once past this threshold, those who earn less will take longer to pay off their loans, accruing interest as they go (and the coalition has voiced intentions to raise the interest rate on student loans).

Raising tuition fees to such a level is not, despite government rhetoric, a necessary response to the economic crisis. Income from fees will in any case not begin to come in for several years, until the first cohort of students to pay the higher fees have graduated. It is an ideological sea change that marks the end of any pretence that higher education should be considered a social good. Instead of seeing universities and colleges, and university graduates, as beneficial for the wider economy and society, the Browne report and the coalition government view degrees as individualistic, self-centric tickets to employment.

The coalition maintains that the creation of a market in higher education will raise standards through competition, result in a greater meritocracy in university provision, and improve student “choice”. But first of all, few universities will be willing 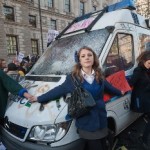 to charge less than the maximum they are allowed, given the swingeing cuts to their state funding. Second, many universities will be unwilling to charge less than their rivals, thereby advertising to all that its degrees are worth less. Those which will end up having to charge lower fees will be those that are struggling academically and in terms of reputation. Students who choose these universities for their lower fees will disproportionately be those from less advantaged backgrounds who are worried about their ability to pay. The existing classed hierarchy of universities will only become starker.

The changes to education are not wholly devoid of positives. The recommendations that part-time students should no longer pay up-front fees and should be eligible for more support are welcome, and will particularly benefit mature students returning to education later in life, including parents taking higher education courses in conjunction with childcare and often work. Raising the debt repayment threshold to £21k is also a positive move. But it is disingenuous to suggest that raising this threshold will result in a level playing field. Students from poorer backgrounds will,  unsurprisingly, be much less willing to take on the burden of a vast amount of debt in exchange for a spurious promise of a better job sometime far in the future.

The overall picture is very gloomy indeed. Small wonder that students are taking to the streets. Although some portions of the media have tried to portray demonstrators as selfish, entitled middle-class students fighting to retain an unfair advantage, none of the university students marching will be personally affected by the rise in tuition fees: they are protesting for the younger generation. Those who are still at school or 6th form college may not even be given the chance to try for university, as their Educational Maintenance Allowance, which gives sixth formers £30 per week to encourage them to stay in education, is also being cut.

Yet the Daily Mail gives us hope for the new generation: as this website pointed out recently, their headline the day after the second day of action on the 24 November was “RAGE OF THE GIRL RIOTERS”, the article outraged at young women taking action against cuts to their educational futures. (The male demonstrators are simply “yobs”.). It seems that, while young men “rioting” is only a confirmation that (male) youth is disruptive, violent, worthless, young women doing the same is unacceptably unfeminine. They did not include another iconic photo of the protest: girls surrounding a police van, trying to ward off protesters from damaging it, all too aware of the media’s relentless focus on youth as troublemakers and knowing that this property damage would be redefined as violence and used as confirmation of the illegitimacy of protest, to uphold the status quo.

Speaking to an audience last week of university, college and school students, occupying a lecture theatre, Cindy Carter of Cardiff University’s School of Journalism, Media and Cultural Studies spoke passionately of the historical struggles that women have gone through in pursuit of higher education. These are struggles that have not yet been won, and struggles that are shared with other groups marginalised from education. Higher education is still a distant dream (if that) for many women (and men). The coalition’s cuts and marketisation of education will be a great step back in time for educational equality.

One thought on “Cutting Women Out of Education?”