Let it be known that my six-year-old daughter is a child rife with frolicsome mischief.

The experience of parenting said child fostered my interest in naughty youngsters, the connections between misbehavior and personhood and how all children—especially girls– are socialized in schools. Thus socialized through behavior management practices, many are taught to equate obedience with learning and conformity with personhood. Recently I came across two different pieces in the mainstream media that piqued my interest along these lines: The first was Bill Lichtenstein’s September 9th New York Times reflection on the all-too-common strategies for ‘managing students in US schools and the second was a BBC interview with Michael Kenny, the first male graduate of Norland College.

The Kenny interview focused not on Mr. Kenny as a potential challenge to hegemonic masculinity but rather as a cultural curiosity: a man doing ‘women’s work.’ Interview topics included: the particulars of his uniform and where he purchased his chinos (just to make sure everyone knows he is a real man and not wearing a dress!); how much fun it must have been to be around all those female nannies (joking about unfettered access to all-those-females meant to assure everyone of Mr. Kenny’s heterosexuality, rampant); and  the problem  of having two men under one roof (fathers who might employ Mr. Kenny must face the implicit challenge of having ‘another man in the house’).  From there it got even better. Apparently, parents might value having a strong male role model around ‘if the dad is working all the time’ (‘…or the mother,’ Mr. Kenny added hastily) especially amongst boys, who are ‘a bit more hectic when they are younger, a bit restless, while the girls tend to sit sweetly.’ Mr. Kenny was really doing his best—the interview, much like the official photo of his graduating class which featured him in the front, the cadre of female nannies behind him, phalanx-like, was a bit bizarre. That said, I must give him credit: I can’t imagine any 18 year old of my acquaintance exhibiting such composure while being pelted with odd questions on national television. However, given my interest in childhood, gender and mischief, and what it means for children to experience a gendered twist on old-school Foucauldian discipline, I was struck by the juxtaposition of Mr. Kenny’s own gendered experience and his characterization of socializing children toward valued femininities and masculinities.

I don’t mean to give Mr. Kenny an undeserved hard time. After all, he only said what the culture already tells us: girls are supposed to be good, and boys are supposed to be naughty. Of course, the corollary belief system is equally familiar: girls who are not ‘good,’ who don’t ‘sit sweetly’ are not just ordinarily mischievous children but rather failed females and therefore, somehow especially bad (Surprise! Feminism is to blame! As Chesney-Lind and Pasko (2012) 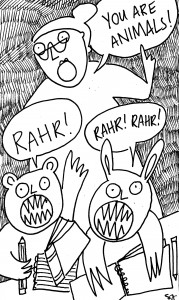 observe, the popular media connect women’s equality with violent girls: ‘NBC news broadcast a story on its nightly news that opened with the same link between women’s ‘equality’ and girls’ participation in gangs: ‘Ironic as it is, just as women are becoming more powerful in business and government, the same thing is happening in gangs’ [p. 36]).

Similarly, boys who are not bad, who fail the ‘boys will be boys’ test by ‘sitting sweetly’ are failed males, by which we mean they are homosexuals who must be culled from the herd by the most violent means possible. As the American Association of University Women’s (AAUW) landmark 1992 study suggested, teachers tend to reward boys’ gender-appropriate (read: disruptive) off-task behaviors with attention (Unless you are a black or Latino male, in which case you are sent directly to special education [see Harry & Klingner, 2006] or restrained and isolated, as described in the next paragraph), and simply stop interacting with the girls who, ‘sitting sweetly,’ do not present disruptive behavioral problems and do not need the prodding attention (which is attention still, and does make a positive impact in the long run, not unlike a kind of Hawthorne Effect).  I taught elementary school in the US for several years, and more than once discovered a female student who, despite a track record of “A’s and praise” could scarcely read. Such a girl may have been given an ‘A’ in the previous year simply because she was ‘nice’ and ‘kind’ and ‘neat’ and even ‘pretty.’ I caught myself doing it as well, and even as a faculty member in the University I find myself absently expecting a rakish, maverick triumph from my ne’er-do-well men and a meticulous descent into mediocrity from my tidy, pretty, detail-oriented women. Because boys are bad, and girls are good, schools swiftly sort desired femininities and masculinities into their respective camps of expectation.

But as the New York Times piece reminds us, that isn’t the end, at least not in schools where both personhood and behaviors are profoundly gendered as well as racialized. Lichentenstein observes that restraint and seclusion have become “a common way to maintain order” in American schools. Among the nearly 40,000 who were treated thusly in 2009-2010, a blazingly disproportionate number were African-American and Latino children. Just as goodness is scripted as female, and badness as male, so also malevolence is irretrievably associated with children of color. And the ways in which misbehavior, naughtiness, mischief and off-task behavior (there are more terms to describe undesirable behavior than there are to describe the apt pupil) are treated socialize some children to believe that they are deeply, intrinsically bad, and indeed not fully human. In some recent research of my own, I paid attention to the metaphors primary school teachers use to describe the young children of color in their underserved, urban classrooms: Nearly 80% of the time they compare the children to animals. And not in an endearing, what-a-sweet-little-bear-cub-you-are  way, either.

There has been a great deal of scholarship in the ethnography of childhood that focuses on the processes by which infants and children become persons. In US schools, much of this has to do with learning to ‘behave properly’ and, as illustrated in the preceding paragraphs, there are gendered expectations for appropriate kinds of good and bad behavior.  It goes without saying that U.S. mainstream culture provides contradictory and confusing messages about when and how children become persons. Cultural practices paradoxically emphasize both a vigorously neontocratic focus on and defense of the personhood of the unborn (e.g., vitriol and violence against abortion clinics and providers) as well as a simultaneous disregard for the personhood of those already born (e.g., the United States’ persistent refusal/reluctance to ratify the UN Convention on the Rights of the Child). Such contradiction continues into the early schooling years, where personhood is gifted and denied in an array of irrational and inconsistent practices only minimally understood by participating teachers and children alike. While teachers are culturally associated with promoting children’s development and growing personhood, they may also be, pa 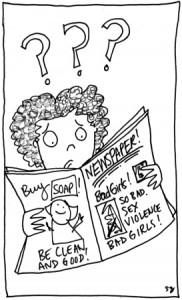 radoxically, participants in its suppression. Meanwhile, children who are constructed as ‘bad’ can also be seen as resistant agitators for recognition of their personhood outside the reductionist bounds of on-task/off-task behaviors.

One of the chief purposes of early schooling is to socialize children into socially (and, secondarily, academically) competent individuals. Such competencies typically take the form of ‘good’ behavior. Compliance, conformity and other ‘good’ in-school behaviors are arguably the measures of personhood in the institutional/schooling setting for most children. The teachers themselves are the enforcers and arbiters of personhood.  Recent demographic data suggest that new primary teachers are overwhelmingly white, middle class and female, and only a few years out of their own childhood experiences when they begin this work (Ingersoll & Merrill, 2010). Research suggests that new teachers may adopt deficit discourses in relation to students and families that are different from themselves, characterizing these as deficient (Ladson-Billings, 2006; Solorzano & Yosso, 2001).  This is especially true when the children’s families are working class or poor, English language learners or people of color. Considering the historical role of schools as cultural homogenizing and gatekeeping institutions (Judge, 1995), teachers’ cultural conceptualizations of personhood have significant bearing for students who are not white, middle class English speakers. Failure to meet these criteria or resistance to teachers’ definitions of and cultural practices around gifting personhood can relegate children to the liminal space of spoiled personhood or non-personhood.

Morton (1996) writes that ‘the process of child socialization is closely tied to cultural ideas about the ‘nature’ of children and the way this must be accommodated, transformed or replaced in order for them to be regarded as fully adult persons’ (70). Lichtenstein’s experience suggests that some teachers may believe that children are inherently bad, abnormal, non-persons, salvageable only through obedience and submission.  Obedience is favored, resistance is (usually) punished, and despite the assumed cultural function of schools to form persons based on standards of social competence, schools are instead sieves of selection that systematically deny personhood to many. Schools, then, are concerned with the production of unrecognized, often medicated and spoiled non-persons in such cultural sieves.

Now back to my six-year-old. She would probably confound Mr. Kenny as she is hardly ever ‘sitting sweetly’ and, if her Kindergarten teacher is to be believed, she is also rarely ‘sitting’ at all. She is noisy and busy and sassy and talks back to adults. She has only the most selective respect for authority, and insists that not all rules are meant to be followed. She is also delightful, creative and funny; she fights for justice and fairness on the playground and is smart enough to know, on some level, that her ‘naughty’ behavior demands attention and ultimately affirms her personhood. This is increasingly important in an era where children are referred to not as people but as figures, test scores, indicators of scholastic progress. Her teachers often move her to the front of the classroom. They check in with her frequently to keep her ‘on task.’ Nobody forgets about her and she is never silent. She’s also not afraid to be wrong, to be called out in class, or to hear her name spoken, because part of learning that obedience is not the same thing as fundamental human-ness is that it is okay to take the intellectual risks necessary for learning. Yet, because she is white, speaks English, and comes from a suburban, middle class socioeconomic tier and benefits from the privilege associated therewith, it is possible that she is less likely to receive the treatment described in the Lichtenstein article. But as she grows up, it is always in my mind: at what point will her reluctance to ‘sit sweetly’ result in socialization that is swift and terrible?