International women’s week was inaugurated in the media this year in a quiet way and yet it has spawned a tremendous amount of footage in the press and other media, culminating in the UK with a weekend festival of arts called Women of the World organized by Jude Kelly, indomitable director of the Southbank Centre in London. What is particular music to GEA is the welcome focus on Education as the main path to equality as can be seen in a myriad of articles, letters and comments and the launch of the new British Library website.

The Guardian was at the forefront of publicizing International Women’s Day (IWD) with articles and letters galore. Their lead letter was entitled ‘Men and women must unite for change’ and was from singers and artists, perhaps led by Eve Ensler, one of the signatories, who had inaugurated ‘a billion women rising’ around Valentine’s Day. The letter covered issues of gender and sexual violence across the world, including issues of female genital mutilation that had been raised earlier in the week, but started with Malala Yousafzai, the Pakistani schoolgirl shot for demanding girls’ education:

‘The shot was heard around the world. The teen has now recovered her strength and is now heralded as a leader in the movement to bring education to every girl…’ This led to their byeline WE MUST ECHO MALALA YOUSAFZAI’S WORDS AND ALL COMMIT TO ENDING VIOLENCE AGAINST WOMEN’…

UKFeminista has also begun a very welcome campaign, based upon American protest, to get women and young girls to say why they need feminism, and most of the young women, as reported by The Guardian (8.3.2013, p 18-19) for IWD talk about issues of gender and sexual abuse, or harassment and domestic violence. And they have learnt to talk about these matters through school, and feminist teachers. Jane Martinson’s analysis article is headlined “School is equality’s new frontline”. This is indeed music to GEA’s website. The new social media such as Twitter (±twitteryouthfeministarmy) is aiming to spread the word of feminism to girls as young as nine, she argues and mentions several more outlets for spreading feminism to very young girls, in ways unheard of before.

Finally, The Guardian in its G2 (8.3.13, p.28) also had reviews entitled ‘A Week in Radio: Feminist Issues’ in which the Start the Week programme that I had signaled in my report last week was reviewed, with a severe and trenchant comment on the erstwhile feminist Catherine Hakim, who, through her book Honey Money: the power of erotic capital sees the problem as that age old one of women themselves and as Nosheen Iqbal comments ‘In the end, the debate wasn’t particularly vigorous despite Hakim’s attempt to spin sensationalist baloney into less sensationalist radio’!  However, there was another radio talk for BBC world by Stephen Sackur on Hard Talk, where he interviewed the powerful and redoubtable American feminist icon, and founder of MS magazine – Gloria Steinem – who refused to be cowed by Sackur according to the reviewer ‘Steinem was glorious in response, Sackur unrelenting. It was a great interview’ (and as a podcast it is available from the BBC website!). 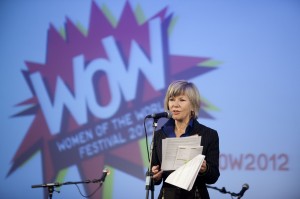 Standard would. And yet on IWD (8.3.13) their lead editorial was amazingly entitled Why we still fight for women’s rights and was yet again dedicated to arguing for EDUCATION as the key…’So it is that we have to fight for women and girls’ basic rights, such as education…the cause for which Malala Yousafzai almost died…and it also mentioned female genital mutilation and ‘…meanwhile, other British women face violence elsewhere in their daily lives – or else are degraded in ways such as those highlighted today by Home Secretary Theresa May, who announces a drive to stop girls being pressured into sending males explicit photos of themselves…’ Whilst May may have a simplistic view of sexting, compared with our own Jessica Ringrose’s more feminist analysis, it is now hitting the headlines in a more welcome way. But unfortunately the Evening Standard editorial writer does need more feminist education, as the editorial ended by recalling the words of Mary Wollstonecraft, but referred to her as American feminist pioneer…she was in fact thoroughly British.

Alongside the editorial, the paper carried another dramatic and amazing article entitled Malala’s vital lesson for US foreign policy written by John Kerry ‘in his first article for a British newspaper, the new US Secretary of state says he will continue Hillary Clinton’s fight for women’! The article was again full of detail about how the US wants to ‘advance the rights of women and girls’ and yet whilst we might consider some of them platitudes, and only in US economic interests globally, and some somewhat racist or feeding anti-Muslim sentiments, nevertheless new forms of gender equality are now being asserted.

‘No country can get ahead if it leaves half of its people behind. So it is in the interest of boys and men to do everything in their power to unleash the potential of girls and women and to champion their rights, because without their contribution we are all the poorer. This is why the United States believes gender equality is critical…we can and must commit to this so that each of our daughters can ride a bus without fear, all of our sisters can fulfill their tremendous potential, and we can tap the talents of every single woman and girl’!

I picked this paper up as I left the opening of Sisterhood and After: The Women’s Liberation Oral History Project, which was held at the British Library. The event celebrated the work of my sisters, friends and colleagues who had been involved in inaugurating the women’s movement in the 1960s. It was wonderful to meet up with some many of them and see how these pioneers had been at the forefront of creating this new archive of material, again for the educational record. Two of these pioneers – the historian Sally Alexander, and the feminist psychoanalyst Susie Orbach – spoke about their involvement in Women’s Liberation and how it became their lives and how therefore this project, jointly with the Women’s Library, the University of Sussex’s Dr Margaret Jolly, and funded by the Leverhume Trust. The material again was now being put in the public domain to keep a collective record and to enable A level and other students to have access to the 60 interviews with these feminist pioneers. These are now available on the Sisterhood and After learning website and also on the Sisterhood and After project page.

Quite a dramatic week for feminists, and one that those of us setting out in the 1960s could not have dreamt of… We have been amazing, despite all the vicissitudes and the violence and girls having to endure shooting is perhaps why this has now reached the top of the agenda, but we are especially now celebrating the power of education…let’s hope it continues to live up to its potential.

Sadly, however, despite this fanfare, the UK coalition government does not seem to take these arguments seriously. Michael Gove, the Secretary of State for Education, should be encouraged to take a leaf out of John Kerry’s book, but instead he is fostering ‘free schools’ with the opposite aim…to turn the clock back on women’s and girls’ education by getting rid of safeguards to quality. According to The Observer (10.3.13, p.26) ‘We have given free schools and academies the same freedoms the best independent schools enjoy…so that they can inspire pupils…’ But inspiration for what? Surely what has been the major inspiration over the last 40-50 years has been women’s liberation not freedom to be oppressed by men and elite men through independent schools? This is the feminism that we want and that is why young women and girls still need it.