Following on from GEA chair Jessica Ringrose sharing her experiences of participating in the London Women’s March, Equality and Diversity Lead, Victoria Shouwnumi now shares her story of her time marching in Frankfurt.

I was fortunate enough to participate in one of the many marches across Germany on 21st Jan 2017.  The women’s march I joined was in Frankfurt.  I had been disappointed that I would not be able to take part in the London march so was delighted to be invited by an active group of LGBT young women and other colleagues.

We all met the main station of Fulda and went to the march as a group.  Our group was intersectional and international as the group included LGBT along with straight women from Poland, Albania, England and Germany. Our grouping offered a space for intellectual discussion and debate whilst we made our way to the march.

We were able to be energized by the unexpected and how the day was going to unfold. To be honest I was rather nervous as this would be my first march in another country – and it was not until I saw all the police (given there had been a recent attack in Germany) that it actually dawned on me I could be heading into a potential dangerous situation.   During that brief moment of fear, I took a deep breath along with a short prayer and decided that it was going to be a glorious day.

It was hard to believe that the sky was so blue and the sun was so bright if it had not been for the coldness one could have mistaken the day as the beginning of spring.  Walking along with the crowd was just bliss.  It was as though I was having continued conversation with different people along the march.  I could be speaking about politics with one person and continue with a different aspect of the conversation with a totally different set of people.

However what was clear was the message of the day ‘we are all one’ and that felt good. 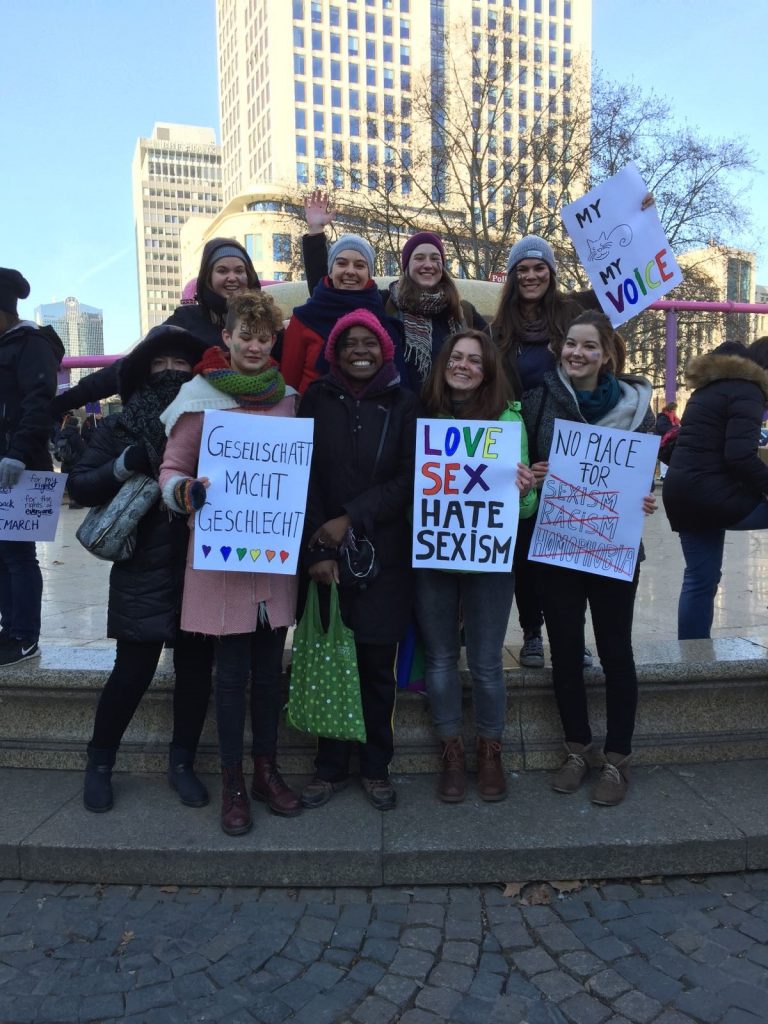 My name is Miranda. I am an Albanian woman and I have been living in Germany for the past six years. Actually, I didn’t know anything at all about the women’s march in Frankfurt. Thanks to an English colleague of mine, who is teaching at the same university I am working, I got to know about it. I am really happy that I came. It was a unique experience! It is hard to describe what I felt during the women’s march in Frankfurt, but I somehow felt safe and secure. I felt safe because people from different nationalities or cultural backgrounds were marching not only in Frankfurt, but also all around the world looking for gender equality, women´s empowerment in societies as well as their full participation to political, economic and social decisions. Personally, I see these marches as a great effort to raise our voices and put an end to all existing forms of discrimination of women. It is time to say no to people who artificially maintain the myth ‘we are all equal’! 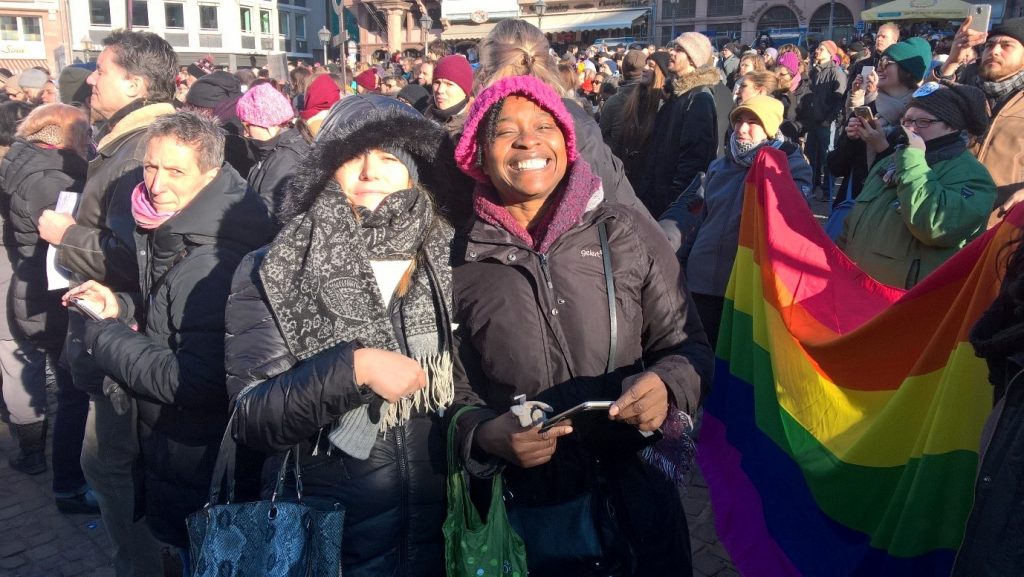 I went to the women’s march with you last Saturday. My name is Jacqueline Glasbrenner, I’m 21 and from Germany. After traveling the world for two and a half years, I began to fight for human rights. Since I have seen too much suffering in the world and the non-respect of human rights in a lot of different countries.

Furthermore, I find it terrifying that a homophobic and sexist man is the new president of the USA, one of the leading countries in the western world. That’s why we came together on Saturday, but not only to stand with our Sisters in the states. We also marched for women all over the world whose voices cannot be heard because of oppression, we stood up against Sexism, Homophobia, Racism and any other form of discrimination. We are all worth the same, we do all deserve respect and acceptance and we should all have the same fundamental rights!!!! 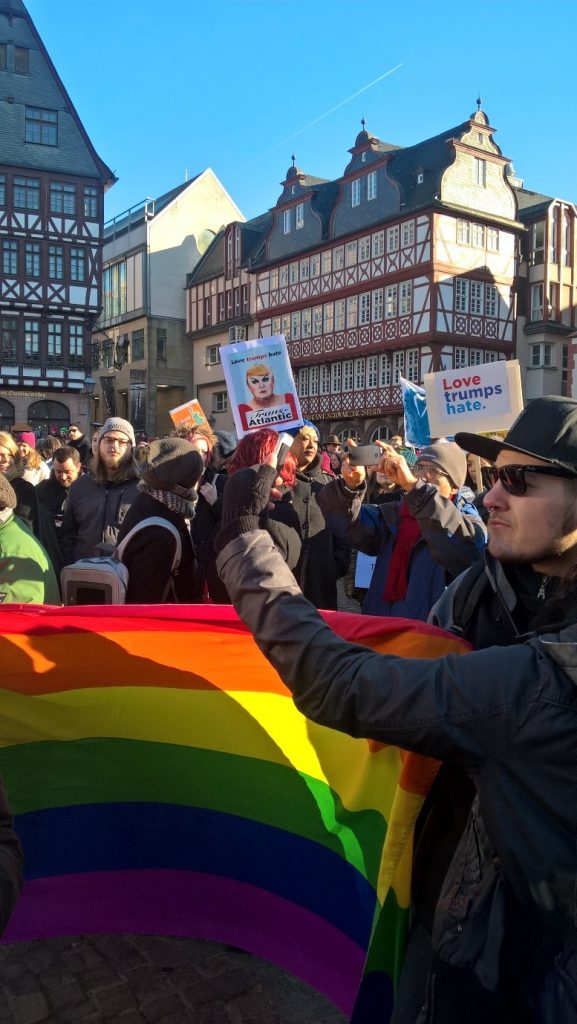 During the march, I was full of emotions. All type of emotions which at times ranged between happy and the feeling of anger. I had never experienced so many emotions in such a short time.

To see all the people standing up for justice with their loud voices and messages on their posters made me feel euphoric and to be a part of a peaceful movement, to walk and scream and stand up against discrimination made me feel so happy. I believed it wasn’t “just” a solidarity march against Donald Trump and his statements, it was a march that stood for social justice.

I had the feeling I´m standing up for myself.  It is really hard to describe the emotions which have erupted inside of me, hence I have no words just a new sense of feeling. It is something between happy and angry it’s hard to put words to the feelings.

I also saw that at this march there was place for everyone. It was like an open demonstration where everyone could broach an issue of what she/he wants. Whether it was for against sexism, homophobia, climate warming, against The Transatlantic Trade and Investment Partnership it did not matter.

From children to old people, everyone walked for themselves or stood for their messages.

On Sunday when I opened the newspaper I again was overwhelmed with emotions. Millions from across the world of people had stood up for equality. What a Loud message and with such expression with colour, with music, speeches and posters it was just wonderful.

In Frankfurt there was a woman who had a poster with “You Never Again Have the Comfort of Our Silence!” I read this and thought “YES!”. Everywhere in the world in so many cities people where loud. Peacefully loud.

While I am writing you I again have this emotion inside me which I cannot express in words. Not only because of my English but also because I´m just not able to. I think the march has triggered (I don’t know if this is the right word) something inside me. And probably I need time to find out, what´s happening inside of me.

The march makes me think about me, about what is going on in the world, not only in the USA or Germany.

I don’t know if I could help you for your article with my words but to sit here, to think about Saturday and to write some things down helps me. And I´m thankful for that Victoria. 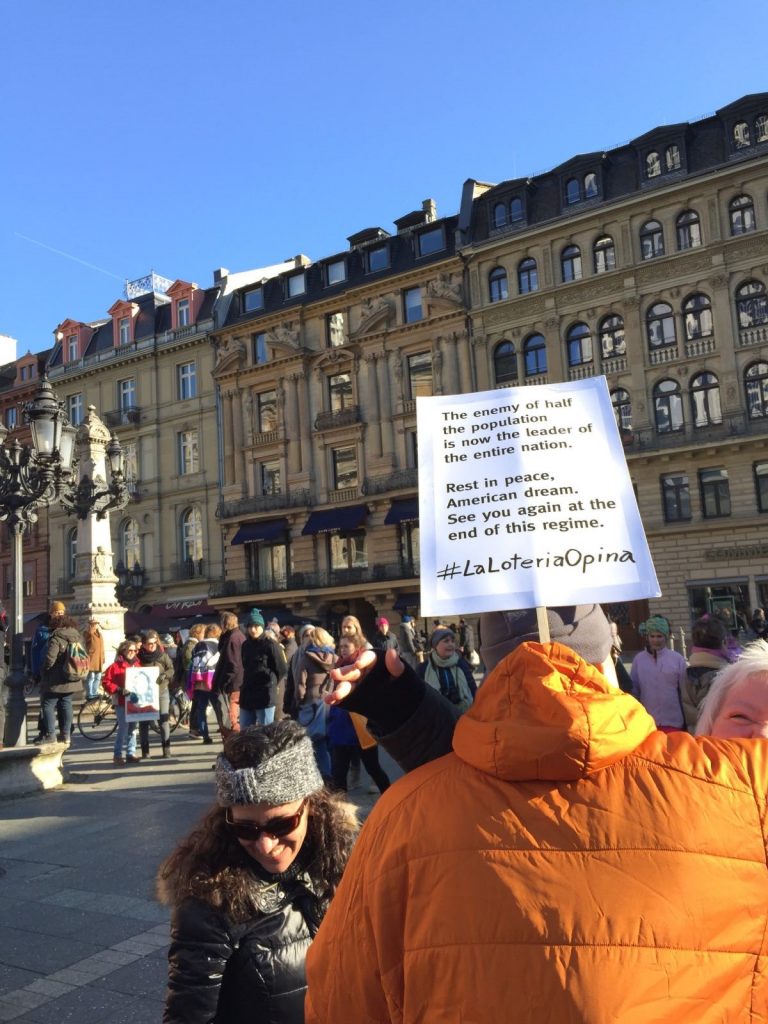 “you will never again feel the comfort of my silence”. This was one of the statements I saw in the crowd during the Women’s March in Franfurt. It has moved me so much and I still keep thinking about it. I was there to raise my voice too for social justice and diversity. I saw how important it is to show our presence, keep together in solidarity when fundamenatal human rights are disrespected and vilated. To be there was empowering, as it gave me hope and a sense of belonging. I also saw againthe need and urgency to listen to each other – to all the diverse voices, perspectives, expereinces  and struggles. Racism, ( hetero) sexism, clasism, ableism, homo/transphobia… all intersects.

We need to act against oppression in the way that everyone feels represented, seen and heard.  Because as Audre Lorde said …” I am not free, while any women is unfree, even when her shackles are very different from my own”. 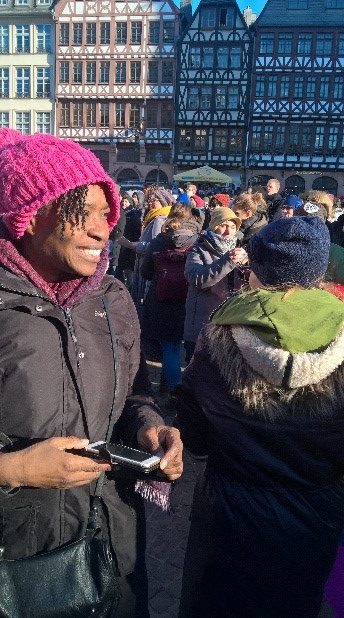