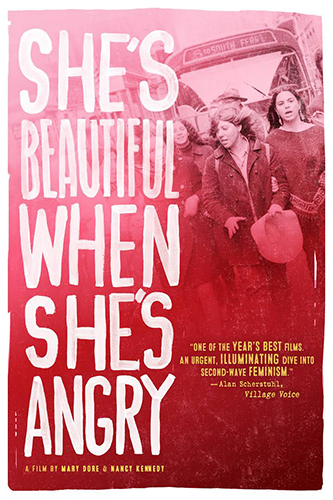 The film is an incredible narrative account of second wave feminist activism in USA, which raises many questions about the current state of feminism globally today. GELS Network members including students from The City of London Academy Islington Feminist Group debated how best to inject feminist content into the secondary school curriculum in England, given the gaps and omissions in the common curriculum.

Here, Yvonne Ehrstein (PhD candidate in the Centre for Culture and the Creative Industries) reviews the event.

The Centre for Culture and the Creative Industries at City, University of London, hosted a screening of the critically-acclaimed film She’s Beautiful When She’s Angry that was followed by a Q&A discussion on feminist activism past and present with an intergenerational panel.

The event was organised as part of the 40th anniversary celebrations of the Centre for Culture and the Creative Industries, in association with Gender and Sexualities Research Forum (GSRF).

Mary Dore’s documentary stands out due to the multiplicity of voices that are expressed and made heard in this portrait of the early phase of second-wave feminist activism in the US.

Smoothly blending historical footage and current interviews with movement participants, the film recalls activist landmarks such as the publication of the Boston Women’s Health Book collective Our Bodies Ourselves and the underground abortion service provided by the Jane Collective.

In looking at the present, veteran activists observe: “We have gone backwards in terms of reproductive rights and childcare.”

The chair of the panel was Dr Jo Littler, a Reader in the Department of Sociology, who pointed to the wide range and scope of the film and said the documentary’s value was to show “the visual history” of second-wave feminism, which was not that familiar.

Sue O’Sullivan, who has been an active member of the London Women’s Liberation Workshop, said a subtle yet deep undercurrent would characterise the present-day backlash against feminism. She was joined on the panel by the UCL Institute of Education academic Professor Jessica Ringrose, who said we lived in a “frightening period” and raised the question whether misogyny was the right word to capture what is going on nowadays. However, social media and more generally “collectivity online”, she argued, “does have potential” and could be used as an important political tool to facilitate involvement in contemporary forms of feminism.

The founder of the Highgate Wood School Feminist Group, Rosa Tully, said that while feminism today was predominantly social-media based, there was “a lack of protests on the streets, and a sense of unity”. Getting together and sharing experiences of being a female would still be relevant to building awareness for gender equality.

Neil Robertson, Curriculum Leader for Social Sciences at City of London Academy, Islington and facilitator of school feminist groups, said it was crucial to keep up the connection to second-wave feminist vigour and transmit the message “don’t think that you can’t do that”.

The discussion ended in a re-evaluation of the potentials of feminist education, which could include compulsory sex and relationship classes to tackle women’s harassment and revive feminist political energy.

*this review was originally published here