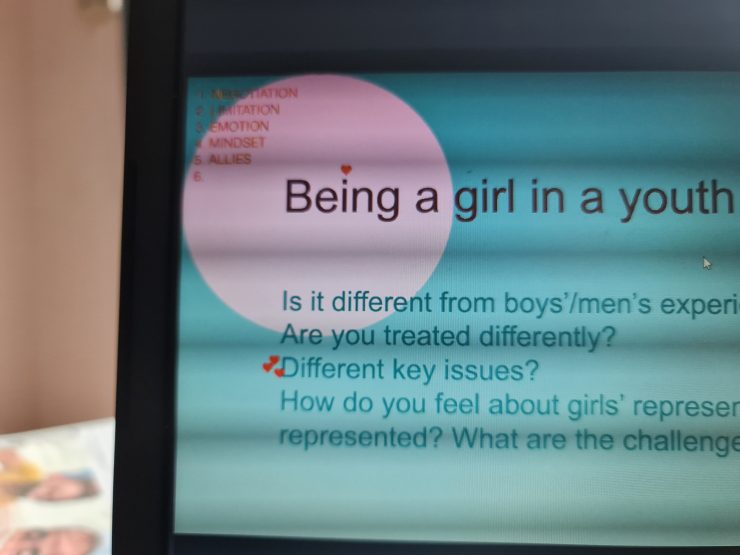 Two youth researchers in different time zones login to a Zoom meeting. For one, it is 6.45am, rainy and still dark, as she sits alone in her living room in Glasgow waiting for the meeting to start. For the other, it is 2.45pm and a warm Kuala Lumpur afternoon, where she anxiously waits with other members of the Malaysian Youth Council secretariat, head buzzing with the thought of technical issues and other members’ expectations of the event ahead.

Working together over a distance of over six thousand miles, they have spent the last few months preparing to hold a hybrid event aimed at bridging the material and virtual worlds in an effort to create a safe space for feminist discussion and consciousness raising activities with members of different Malaysian youth organisations from across the country.

In this blog post we discuss the aims of the workshop, the methods we developed to meet these aims, and where we see the project going in the future. In doing so we hope our work will speak to some of the challenges other youth, gender and education researchers have met since the outbreak of Covid-19 and consequent shift to online spaces for so much of our educational lives in recent times. More broadly, we hope to contribute ideas and strategies for educators, activists and researchers to make the most of online spaces – a way to bring  a sense of real-worldness and materiality to a virtual space, in particular around the use of arts-based and participatory methods.

Themes and goals of the workshop

The current project started with a simple conversation around the place of feminism in Malaysian youth movements. We were cognisant that, in spite of its focus on intersectionality, Fourth Wave feminism as a movement for the most part remains entrenched in ‘Western’ ideas of gender and equality. We were curious as to how contemporary feminist debates were mobilised in Malaysian youth groups, and which issues were important to these young women and girls. It was out of these discussions came our plan to design an event that was part-consciousness raising, part-creative, participatory workshop.

To this end we defined the broad theme of ‘What it’s like to be a girl in a youth movement’ for the event. We hoped this question – aimed at encouraging participants to interrogate their gendered experiences within their youth activism – would serve as a catalyst for consciousness-raising discussion and activities around feminism. We wanted to define a safe space which would allow participants to: discuss their feelings around their gendered experiences and standpoints; discuss their feminism/feminist identities; and/or facilitate feminist consciousness raising for those new to feminist theory and movement. Simply put, we hoped all participants (including organisers) would leave the event with a renewed energy and investment in their feminist identities as part of their broader youth activist work, regardless of whether these ideas were relatively new or well embedded in their practice.

Based on these principles, we developed a module guided by the following key statements:

We wanted to ‘normalise’ feminism and emphasise the idea that feminist work can be part of routine, everyday activities and interactions which promote solidarity between women and girls, embed an ethos of support and care, and raise the profile of feminist causes. In doing so, we hoped to modify preconceived notions around what feminism is/means, and what kind of people feminists are, for participants. This served to (in part, at least) eschew problematic images of feminist-as-man hater, feminist-as-angry, feminist-as-dogmatic – commonplace ‘backlash’ narratives worldwide, which one of us had witnessed in the Malaysian context through the online scrutiny of young women who ‘called out’ sexism on social media. At the same time, we wanted to make it clear that we can all be part of a feminist cause without the need to take part in public modes of feminist politics, such as marches, protests, public discussions, campaigning, training and so on. Simply put, we hoped to encourage the feeling that feminism is for everybody, that feminists are just like me and you, and that the barrier to entry into feminism as a meaningful political movement are low, i.e. can be enacted as routine; in the everyday.

During the event, this took the form of sharing and prompting for examples of feminism as an everyday practice. We shared feminist memes and gifs; we discussed how solidarity could be as simple as a supportive text to a friend; participants raised and made visible examples of feminism in action in their own work (including those who might not have identified as feminist). We believe that this was an effective consciousness raising activity which served to make feminism both palatable and accessible, while still maintaining the meaning of the movement: equality and solidarity for and amongst women and girls.

Bringing the virtual to life – finding real-worldness in online spaces

We did not want to replicate the online events we had seen elsewhere. It was important to us that the event felt interactive, and that the participants were partners in co-producing a safe space for feminist discussion. Consciousness raising activities were thus designed to probe our – both participants’ and facilitators’ – relationships with and understandings of feminism, feminist activism, and how gendered inequalities impact our lives. Taking this a step further, we developed a range of strategies designed to make the discussion feel less hierarchical, and encourage open communication between participants. We encouraged participants to use the chat box to respond to ideas raised, and to use the stamp function on Zoom to draw attention to items of interest on the screen.

Alongside these tactics for breaking down the artificiality of online spaces, we also wanted to bring in a sense of materiality. To do this we developed a poster-making workshop by creating craft packs which we sent out to participants in advance.

A strategy was adopted from the YouTube ‘unboxing’ trend, whereby all participants who had been posted the pack were asked not to open it until the event. Opening it together, all at once, gave the event a sense of being not only linked by the material sense of touching, feeling and engaging with the same materials, but also that we were working in a shared realtime.

Following the discussion, we all opened our packs together. The enthusiasm in the space was tangible, as participants excitedly opened the package to discover the contents.

We shared some images of simple feminist posters as inspiration, and discussed the ethos of DIY projects and ‘craftivism’ in feminist movement. Listening to a feminist-inspired playlist, broadcast via Zoom, we began making our individual posters.

So, what did we learn and what’s next?

This was our first hybrid workshop and it taught us about the specific value of a feminist ethos in online spaces. Everyone, participants and facilitators, were working hard to be present in the virtual meeting space, and to build real connections online – in spite of our shared awareness that sometimes, as with many virtual events, we can feel like disconnected faces on a screen. We learned valuable lessons in the construction of a safe space to discuss feelings around sexism, feminism and gendered experiences, as well as a space in which to energise and inspire each other in our broader activist work. We were required to navigate the competing public and private spaces at work in activist circles, and respect these barriers when discussing complex, sometimes sensitive topics. This included considering the nature of sexism at work in activists’ lives, and the relationship these experiences had to their broader feelings about activism.

We felt the posters that came out of the event demonstrated a keen awareness of specific feminist issues arising in participants’ lives. People explored body image issues, femininity, gender in workplaces, as well as broad themes of solidarity and sisterhood. Posters were as diverse in design as the topics discussed and there were many innovative and creative responses to the brief. Some made TikTok videos of their poster-making, sharing these online and bringing the virtual back in! More broadly, we felt the hybrid nature of the workshop, with physical craft packs and the tactile experience they facilitated, altered the feel of the event. It allowed for a greater feeling of connection between us all, and a sense that we were working in a shared space, with the same tools.

We had a few technical hiccups during the workshop, but believe that the feminist ethos of the event supported us to overcome them, with participants jumping into facilitator roles when technical issues occurred, and vice versa. We felt the way others stepped in when we as facilitators were faced with technical issues resonated with a broader feminist ethos of support. It highlighted the importance of solidarity and emphasised a feeling of: “it’s OK when things go wrong”. The less-/non-hierarchical facilitation allowed us to pass around the ‘power’, both in terms of making contributions to the content of the workshop, as well as in the facilitation of the event.

We hope this ethos will continue into our future projects, and currently have two upcoming events :

1) an interactive movie screening featuring dialogue, discussion and debate around themes of feminism and sisterhood; and

2) A workshop on feminism and media, accompanied by an interactive workshop on gif and meme creation as a feminist practice.