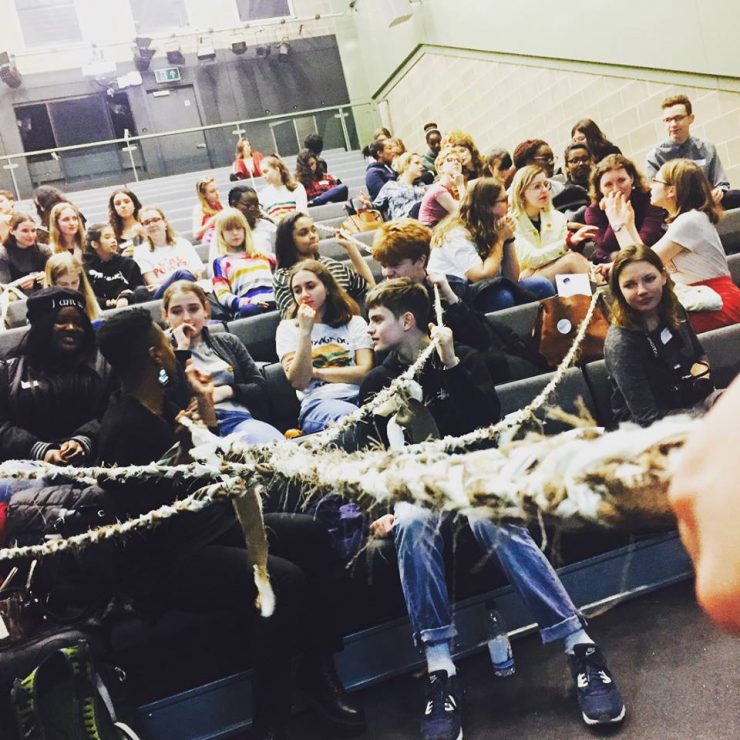 Following on from our recent blog “Sexual harassment at school: What can young people’s gender-based activism tell us?” In this discussion Hanna Retallack, Jessica Ringrose and Tabitha Millett outline IOE UCL led activities designed to support gender and sexual diversity and equity in UK secondary schools.

On Saturday March 10, to celebrate International Women’s Day 2018, UCL IOE doctoral student and feminist teacher Hanna Retallack hosted a Feminism in Schools: #pressforprogress conference at Blackheath High School.  Over 100 young people from schools across London and beyond (including independent, comprehensive and academy schools) joined together with scholars, teachers, activists and NGO groups to discuss how we press for progress around issues of gender and sexuality in our secondary schools. 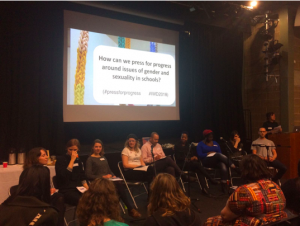 This event brought together a range of UCL IOE staff and students including Jessica Ringrose (Professor of Sociology of Gender and Education) and Paul Dunkley (doctoral student researching Black LGB young people) who discussed the need to tackle gender and sexuality together as well as the possibilities of digital feminist activism; Linett Kamala (IOE / UCL Coordinator for National Professional Qualification for Headship (NPQH) who talked about her art work and the need to diversify the art curriculum. We also heard from representatives of organisations dealing with gender and sexuality in schools including David Brockway of Great Men Project who spoke about teaching positive masculinities with boys and young men, Natalie Bennett of Teaching Individuals Gender Equality and Respect who discussed gender diversity in schools and Amelia Jenkinson from Sexplain who described the work of her inclusive and sex positive sexuality education programme. We also heard from university activist  Sainabou Hydara of University of Kent who talked about the importance of intersectional feminism and secondary school teachers including Charlotte Carson of Feminism in Schools Network who explained how be a feminist activist in school; for schools and Holly McGuire of Teaching Feminists who facilitated the afternoon discussion. 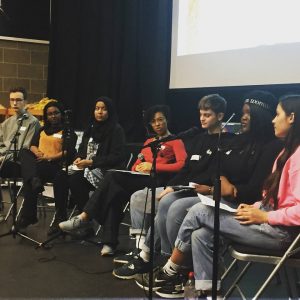 The adult speakers contributed alongside a group of feminist school students from a range of schools around London including Deptford Green, City of London, Oaklands School and Haberdasher Askes. This group of enterprising young activists, all between the ages of 15 and 18, talked about their own feminist activism in schools; an idea for a brand new compulsory subject for 11-15 year olds that teaches them about social justice issues; the need for their curriculums to be diversified across all subjects; the importance of connecting up LGBTQ and Feminist societies in schools;  creating inclusive and safe environments for marginalized students in schools; over-hauling sex education to include all forms of sexuality (and with much more focus on agency and pleasure); their hope that teachers encourage and support their activism and for feminist school students and schools across the UK to join together and lobby for government action.

The afternoon session was devoted to creating feminist art practices for social change. Tabitha Millett delivered the ‘Plait for Progress’ session which wove together feminist concepts, materiality and craft into one participatory artwork. As she explained to the students, throughout the course of art history, domestic handicrafts such as weaving, embroidery and quilt making have all been considered women’s work, due to their associations with and location within the domestic sphere, a stereotypical feminine space. Consequently, these artistic mediums were deemed as inferior to other art works such as painting or sculpture, typically associated with men, as historically women’s work is devalued based on gendered connotations. In the 1970’s, during the Women’s Liberation Movement, feminist artists such as Miriam Schapiro, Sandra Ogel and Judy Chicago challenged this aesthetic hierarchy and pushed to reclaim women’s work and craft as worthy art forms that embodied the female experience and thus seeing it’s transgressive and political potential. Plait for Progress’ methodology is inspired by this reclamation of weaving.

During the art workshop, the participants discussed and shared their ideas from the morning about how they would like to see feminist progress in their schools and wrote down their ideas on strips of material. Each individual group of several students created one plait; then all plaits in each break-out room were plaited together to create five 50 feet feet plaits. These were then brought together in the auditorium to create a five stranded plait that stretched up through the audience, weaving amongst us as we discussed our ideas for change (pictured above).  The collaboratively woven plait then filled the space, weaving in and around the participants. How the plait occupied the space is significant. Plait for Progress takes craft associated with the private and domestic space and makes it public. The deconstruction of the public/private binary isessential for women’s liberation therefore Plait for Progress aimed to reclaim public space through its material agency. Moreover, the plait is comprised of materials carefully selected based on texture and colour.  Here we aim to read masculine, feminine and fluid identities into the materials as a way of escaping the body and representing who is present. Ultimately, Plait for Progress aims to weave ideas together to create something new. 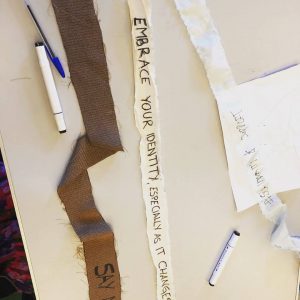 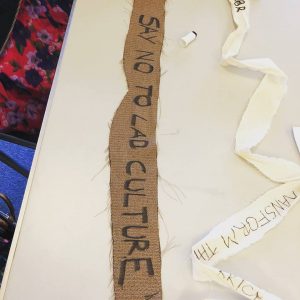 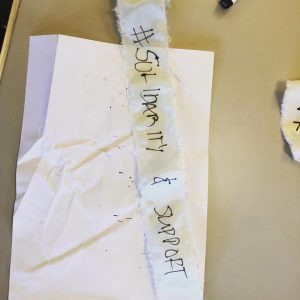 It was a powerful day described by attendees as ‘truly intersectional’, honest’, ‘inspirational’ and as a call to ‘fight for more inclusive schools’. The event is part of the impact agenda for universities, partnering with schools and young people to work together for more fair and just educational environments. This ongoing work is transforming school cultures from the bottom up through grassroots movement. Watch this space for further student and teacher blogging about this event with ideas for how to press for change in your own schools and for an accessible toolkit coming soon with key principles for supporting gender and sexual equity and diversity in schools everywhere.