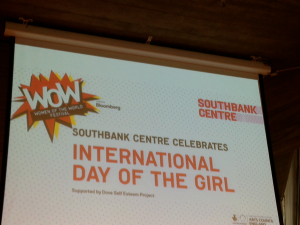 On Friday 11th October, at 7.30am, 200 women and girls gathered in the foyer of the Queen Elizabeth Hall at London’s Southbank Centre. Why were these women and girls were taking time out of their schools, work and daily routines to gather together so early on a cold October morning?

Friday 11th marked the second International Day of the Girl, a day introduced by the UN to highlight the experiences of girls across the world and the multiple barriers to equality they face. This gathering at the Southbank Centre was part of an international day of events focusing on girls’ rights globally, and more specifically, their right to education.

Currently there are 66 million girls worldwide who are prevented from receiving an education. The threat of sexual violence, stigma and the experience of forced marriage are all common barriers that keep girls from attending school. Recent evidence suggests that 10 million girls under 18 marry each year, with some as young as 8 years old. In developing countries, 1 in 3 marries before they are 18.  Alongside this, 150 million girls under 18 have experienced rape or sexual violence. In a school setting, this can be from other pupils or teachers. 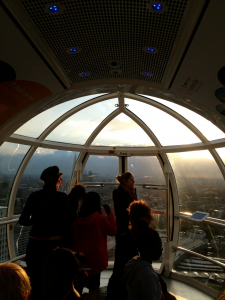 The event at the Southbank Centre aimed to draw attention to these global issues whilst also providing a platform for young girls from across the UK to discuss their fears and aspirations. Girls from between 11-18 were matched at random with women from the media, police, academia, music, arts and politics. Each girl had three 15-minute slots with some of these women, creating space to discuss any challenges they were facing. 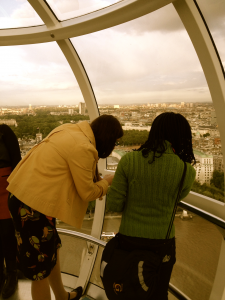 The speed mentoring took place in the London Eye. I was placed in a capsule with 7 girls aged 10-11 and amongst others, a photographer, BBC presenter, graphic designers and a leadership coach. After initial greetings, we set off the first mentoring session. Each of the girls I spoke to expressed fears about going to secondary school in the next year, with one girl bursting into tears as she began to articulate this. Through the next hour, it was a real privilege to chat to each of these young women and hopefully by the end of the time, ensure they were feeling more encouraged and positive about the challenges they were facing.

Following these mentoring sessions, we watched a

performance from an all-female jazz band and some interviews with prominent figures in literature and performing arts industries. The mentors then left and the girls took part in an afternoon of workshops tackling issues such as body image.  The Women of the World Festival at the Southbank Centre provides a unique and important range of events to celebrate women’s achievements and discuss the obstacles they face across the world. It is one of the most innovative, engaging and inspiring set of events I have ever taken part in and I highly recommend that more of us in academia get involved with it.