In this blog post Janet Newman, Emeritus Professor at the Open University introduces her recent book Working the Spaces of Power: activism, neoliberalism and gendered labour.  She asks, in these dire times, how might it be possible to hold onto a sense of hope? And, given the collapse of trust in political parties (at least in Britain), how can we find the resources for political agency?

Whenever I look at the ‘big picture’ narratives of the rise of neoliberalism, or the exhaustion of feminism and other social movements, I lose heart. But when I talk to women trying to take their political beliefs into their working lives I regain a sense of hope – and inspiration. My own research traces how women negotiate institutional regimes to find spaces where political agency is possible. In ‘Working the spaces of power’ (Bloomsbury 2012) I draw on interviews with some 60 women over 4 generations, all bringing political expertise and experience to projects of social and economic transformation. They linked governmental programmes to community politics; worked ‘in and against the state’ in local and central government; sought to bring feminist and antiracist politics into policy reform; and brought new forms of research and action into the academy, think tanks and entrepreneurial spaces. 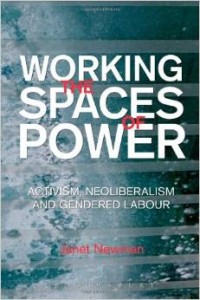 Education was at the core of their work, even if not employed in the education sector. Some sought to educate civil servants and local government actors, bringing them into conversation with those directly affected by policy shifts or organising events exposing them to alternative ideas and experts. Some were involved in development projects in local communities, seeking to empower those in poverty – particularly women – to take collective action. Some worked in think-tanks, universities and research centres. Their work was flexible and creative; and of course was sometimes vulnerable to cooption by governments looking for new solutions.

But I want to explore in particular how women brought political agency into their work in Higher Education, where two rather different political strategies became evident. One concerned challenging the power relationships between teacher and student, or between researcher and research subject. The language here was of partnership, of coproduction, of involvement. Others set out to challenge hierarchies of expertise in academic knowledge; for example the turn to post-structuralism, embodiment and affect in social theory is largely down to feminist academics. Both strategies of course are vulnerable to critique: the former because of its conception of power, the latter because of its implications for solidaristic forms of politics. But that is not my point: both continue to have a transformative power in and beyond the academy.

The stories of the women I interviewed are not always of success. They faced daily negotiations with institutions and systems that were hostile, or that imposed conditions that took the politics out of their achievements (as was the fate of much of the liberal equality legislation of the past). They had periods of retreat and exhaustion, but what the interviews show is how they tended to move on to a different sphere of action rather than withdrawing from political life. They worked ‘inside/outside’, looking both ways: to their political networks that sustained them, and to the organisations that they sought to change. Such work is becoming more difficult as a result of cuts, redundancies and new forms of contract, all of which make women’s employment particularly vulnerable. But it nevertheless continues, often prefiguring new kinds of social and political action. And it is this that offers me – and I hope others- a sense of possibility, of hope.