When we think about the term ‘gender equality’, we tend to think about the oppression, violence and discrimination against girls and women.  We think of boys and men as the oppressors who create the problems that we face as women.  And we think that if we educate these men to respect and honor women, then all of our problems will be solved and the world will be a better place. While there is some truth to this idea, I recently experienced something incredible that changed my whole perspective.

But first a little context…

While working as an informal teen educator in the New York area, my teens confided in me about some of the struggles they faced in every day life as young women.  It was clear to me that even those gender education programs that did exist were ineffective.  I realized that as a female musician and educator, I could create relevant, meaningful and “cool” musical programming for teens that would promote gender equality.  So in February of 2011, I put my musical talents to use and created the “Take a Walk in My Shoes” project.

I wrote an album exploring social justice and focusing on gender equality and self-esteem.  Then, collaborating with my sister, Sharon Orshalimy (Sex educator, and Director of “Open Door”, Tel Aviv clinic of the Israeli Family Planning Association) and my partner, Sheldon Low (Jewish rock musician and educator) I created a series of workshops that use music from my album with games, discussions, and other media to educate young teens about gender equality.  The goal is to inspire and empower participants and help eliminate the root causes of bullying. The project culminates in a community-wide rock concert where I invite participants to come on stage and perform with my band and me.  We sing music from the workshops and make presentations to the community to reinforce and solidify the messages in a memorable, meaningful, and of course, rockin’ way.

Over the past two years, I have been touring the country with my workshops and performing the concerts in schools, synagogues, summer camps, and community centers.  This past summer, one of the camps on my summer tour asked me to run a workshop for a group of young men. I knew that I couldn’t just tweak one of my all-girl, or co-ed workshops so I decided to create a new workshop and I began exploring the meaning of being “a man’s man”.  While researching this idea online, I came across the “Tony Porter, A call to Men” video which inspired me to create “The Man Box” workshop.  I use two of my original songs “Be Who You Gotta Be” and “In My Shoes” along with several games and activities to explore this matter.

But there was one other activity in particular that shifted my whole outlook on gender and education.  I created an activity called “The Man Box” game.  For this activity, we began by compiling a list of qualities and activities that 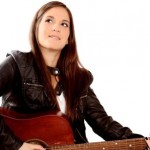 define a “real” man, and put that list into a box we called “The Man Box”.  Then I asked each of the participants to take an index card and anonymously write one quality or activity that isn’t in “The Man Box” but that they wish did fit the definition of a “real” man.  I then had them put their index card into the box and when all the cards were collected I mixed them up, pulled them out, and read the anonymous wishes aloud.   The point of the activity was to show the participants that they all share many stereotypically “unmanly” qualities and desires.

It worked even better than expected.  I was thrilled when one of the boys suggested that we take out some of the qualities that we had initially written inside our man box.  But as I read aloud each of the cards for our new Man Box, I realized that their wishes were even more common than I could have imagined.  Of the 40+ participating boys I had in the workshop I had only 5 or so repeating ideas written on the index cards:

1. “I wish I could cry… Sometimes I feel so sad I just want to burst into tears but I know it’s not considered manly so I keep it all inside.”

2. “I wish I could talk about my feelings with my friends”

3. “I wish girls would initiate sometimes”

They ALL wished that “Men must always be strong” would be taken out of “The Man Box.

The participants started to understand that if all the other boys felt the same as they did and wished for similar things, then perhaps it is perfectly “manly” to cry, show emotions, wear pink, and shop.  And, I believe, they were empowered to be open, respectful, and to even defend other young men who act “unmanly.”   While I had hoped this would happen, I never imagined the honesty and depth of the responses.  I also never imagined that I would be the one who learned so much that day.

I always believed that it was important for boys and men to participate in my workshops and encouraged them to do so because you can’t only educate fifty percent of the population and expect the other fifty percent to grasp it on their own.  But now I know just how intimately women’s liberation and men’s liberation are tied to one another.  We need to educate our women to be strong, independent and ambitious.  We ALSO need to encourage and inspire our men to be gentle, compassionate, and tolerant.  This is the key to eliminating gender inequality.  I am eternally grateful to the small group of brave and honest young men who taught me this valuable lesson, and am so excited to share that new knowledge at my next “Take a Walk In My Shoes” project!

Hadar is an exciting young American-Israeli singer/songwriter/educator who delivers hit music with a message.  Growing up, Hadar was a popular performer in Israel, with appearances on Israeli TV and at major national and municipal events, including in the first season of Kochav Nolad (Israeli Idol).  Upon completing her Army service, Hadar enrolled in the Rimon School of Music in Israel and then the Berklee College of Music in Boston, where she graduated with honors.  After moving to New York, she began touring, writing, and recording with such groups as the Sheldon Low Band and the Josh Nelson Project and also had two original songs pitched to reps for Kelly Clarkson and Anastasia.  In 2009 Hadar released her debut album, “In My Shoes,” a musical exploration of social justice and equal opportunity, with a special focus on gender equality.  Using the music from “In My Shoes”, Hadar created the “Take a Walk in My Shoes” project, a series of workshops focusing on gender equality that aims to educate, inspire, and empower.  In 2011, Hadar started her own music and education company, “In Her Image Music LLC”, an agency that focuses on booking, marketing and promoting the “Take a Walk in My Shoes” project.