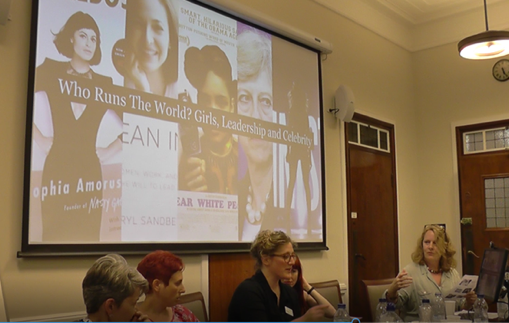 Fellow sci-fi fans may remember the TV series Heroes, in which ordinary people develop superpowers. Their mission centres on one character, Claire Bennet, a high-school cheerleader with the power to regenerate herself. The superheroes’ mantra is, ‘Save the cheerleader, save the world’.

Claire’s precise role in world-saving I can’t explain, because I stopped watching (along with most of the rest of the audience) before the seasons played out, but the mantra stayed with me. Claire Bennet came to mind as I began to think about my latest research exploring girls and leadership, because she embodies so many of the qualities of the successful girl discourse – a discourse that, like her, is proving remarkably resilient. 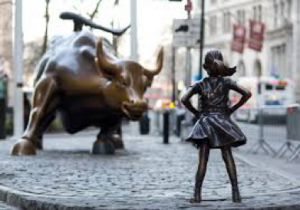 In similar fashion to the ways girls are seen as the key to advancing progress in developing countries, girls in the global North are an increasing focus of attention as the solution to gendered inequalities in decision-making roles. Pre-loaded with girl-power and post-feminist narratives of women’s success in making change, the ‘can-do’ girl of the affluent West is tasked with the mission of saving the world through taking charge of it.  At the same time as The European Commission and The World Economic Forum are raising concerns about the slow progress toward gender equity in power, calls are being made, post global economic crash, for more ethical, careful and connected forms of leadership to avert future disasters of a similar nature. These forms of leadership are popularly gendered as female, as for example in the Lehman Sisters hypothesis. Both political and corporate discourses are thus coalescing around girls as the potential leaders who can deliver a more equal and therefore more secure future. In short, to avert disaster the free market looks to the fearless girl rather than to regulation.

A quick search of Twitter throws up programmes, websites, and motivational speakers galore all promising to empower girls and develop their capacity for leadership. Among the most prominent is Ban Bossy, which extends Sheryl Sandberg’s Lean In corporate feminism to address girls through mobilising celebrities and providing advice and resources to encourage leadership aspirations. The model of leadership it offers reproduces and revivifies some of the central tenets of neoliberal postfeminisms with its emphasis on self-regulation, its focus on individual and capitalist solutions to gender inequalities, and its privileging of entrepreneurship. ‘Change the world!’ the Ban Bossy Leadership Tips for Girls brochure advises, because ‘running a campaign gives you amazing practice for speaking and marketing yourself as a leader’.

While under neoliberal governmentality female citizenship is redefined and redirected away from political participation and towards self-actualisation through consumer citizenship, girls’ leadership campaigns do focus on addressing gendered inequalities through developing a public role; however, the inequalities are represented as barriers to personal ambition rather than as social ills in themselves. As such they are surmountable through the development of skills in self-sufficiency, networking and public speaking. The kind of agency girls’ leadership campaigns promise is not equally accessible to all; like many aspirational discourses aimed at young women, it exhorts girls to believe in themselves and to work hard, offering the promise that they can achieve their goals with sufficient commitment and by creating an attractively branded self. As well as a glossing over of structural barriers, there is a lacuna in popular girls’ leadership promotions where strategies for fostering solidarity, collectivism and activism should appear in order to address them. The girl leader fit for salvation here is Grainne McMahon’s good ambassador, not her shadow twin, the angry activist. 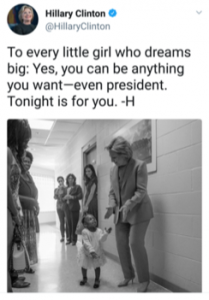 Power, as Mary Beard has noted, is “an elite thing, coupled to public prestige, to the individual charisma of so-called ‘leadership’, and often, though not always, to a degree of celebrity”. It is this relationship with visibility and celebrity that is foregrounded in interventions around girls and leadership. Hillary Clinton framed her 2016 presidential campaign as an exercise in girl-empowerment; Beyoncé, Alicia Keys and Michelle Obama are pledging to Ban Bossy, while here in the UK, Edwina Dunn’s The Female Lead project has produced a glossy book of 60 ‘amazing women from around the world’ pitched at schools. It could be argued that projects like Dunn’s and Sandberg’s are long overdue – a recent study for the World Association of Girls Guides and Girl Scouts (WAGGGS) suggests that girls struggle to name female leaders they admire, and that they are far more likely to identify men as successful leaders.  Access to role models is popularly held to be the key to the development of girls’ leadership aspirations. However, the holding up of celebrities and highly visible role models as the answer to overcoming barriers to leadership for girls is problematic. Young people are consistently instructed that they should not base their aspirations around celebrities. Even when celebrity role models are offered to them, the ways in which girls are expected to admire such models is heavily policed within celebrity discourse itself.

Celebrity aside, the incentives to developing a visible role/public voice in terms of leadership for girls are scant – we are witnessing a rise in public misogyny particularly directed at women politicians and campaigners, especially BME women, on social media.

At the same time, traditional media sources continue represent women leaders in demeaning, diminishing and stereotyped ways – by coincidence, as I start to write this blog with BBC Radio 4’s flagship Today news programme on in the background, the (male) presenter describes the (female) prime minister’s Brexit negotiating tactics as ‘showing a bit of leg’. The (male) politician being interviewed responds without raising objection. 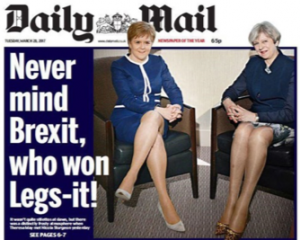 In this project, together with my colleague Hannah Yelin, I seek to gain understanding of l the gendered nature of popular discourses of leadership, to explore girls’ engagements with highly visible women leaders in global media texts, and to gain insight into how these relate to their own ideas, identities, experiences, and imagined futures.  I am undertaking the first phase this autumn, with the support of the GEA. This involves conducting a series of group interview/workshops in schools across England with girls aged 14-15. Participants will discuss ideas about leadership, and then go on to create digital social media collages in dedicated closed groups. These collages will form a visual archive for later comparison in wider European settings. 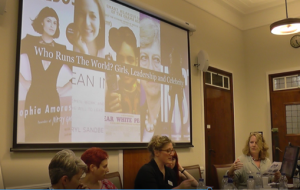 We launched the project with an event this summer: Who Runs the World? Girls, Celebrity and Leadership, where we had brilliant papers from Heather Mendick,  Janet Batsleer & Grainne McMahon, and Anita Biressi followed by a lively roundtable. As well as sharing some initial findings on the GEA site, we will be holding a public engagement event in 2018 exploring some of the implications. To find out more about the project contact Michele Paule.