Ryan Gosling is the star of three current films: political drama The Ides of March, noir action flick Drive and rom-com Crazy, Stupid Love. He’s also the star of the global gender politics phenomenon Feminist Ryan Gosling. This site picks up on and subverts the internet ‘hey girl’ meme which started with a series of publicity stills of Mr Gosling captioned with amusing romantic slogans. For example, a smiling Ryan says, “Hey Girl, Happy Thanksgiving. I’m thankful for your yams and sweet potato pie.” A distraught looking Ryan says, “Hey Girl, sometimes I get so sad when we can’t watch Golden Girls together.” And, one of several topless Ryans simply says, “Hey girl, my shirt fell off.” This site’s an entertaining but odd mix of humour and romance and boasts an endorsement from Orson Welles, who, presumably from the afterlife, calls Gosling “The most awesomest, raddest, coolest dude since me.” Perhaps it is Gosling’s iconic performance in the romantic drama The Notebook that’s made him such a great blank slate for so many romantic imaginations. Although the over-the-top nature of many the slogans make this site as much a parody of romance as an indulgence in it.

So that’s the background to student and teacher of gender studies Danielle Henderson’s site. Danielle was looking for a way to keep track of all the feminist theory she was reading and launched Feminist Ryan Gosling. 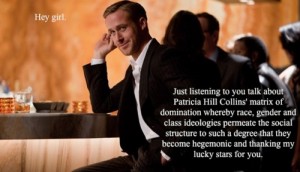 This site is an even odder mix than the original – of humour, romance and feminist theory. For example, Feminist Ryan can be seen saying, “Hey Girl, Anne Fausto-Sterling has a theory that five categorical sexes would help break constrictive gender norms, but the only sex I need is you.” And: “Hey Girl, Gender is a social construct but everyone likes to cuddle.” On this site, Ryan, his head truncated, protests: “Hey Girl, my eyes are up here.” Featured theorists include bell hooks, Judith Butler, Patricia Hill Collins and, the only man, Michel Foucault. We’re not alone in finding this site hilarious. It’s become a genuine grass-roots success. Originally intended only for Danielle’s classmates, it has gone viral featuring in the UK Guardian newspaper and magazines Marie Claire and Time. We’re tempted to suggest that the site raises interesting issues about heterosexual desire and feminist politics but, in a twist that you couldn’t make up, one even more bizarre than the appropriation of Gosling as a feminist, he’s been appropriated as a lesbian.

Since the site took off, many have pondered why Gosling has provided such a fertile space for feminists. The Guardian for example cited his generosity to his female co-stars and ex-girlfriends. He’s also been quoted as saying that when he starts a family he’ll give up making movies. 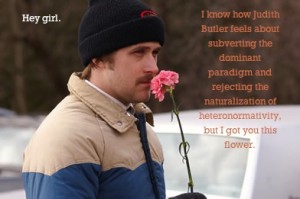 Then there’s the claims that Gosling’s ‘in touch which his feminine side’. He’s talked frequently about his close relationships with his sisters, and being raised by his single-mother. In a recent interview in The Independent, he claimed he ‘thinks like a girl’. And of course, the films – which include his roles as a crack-addicted teacher in Half Nelson and a neo-Nazi Jew in The Believer. Arguably Lars and the Real Girl and Blue Valentine both raise interesting questions about (hetero)sexual politics. But on the other hand, there’s ultraviolent Drive and Crazy, Stupid Love which even we, as longtime fans, can’t bring ourselves to watch, and which (going by the number of times his torso features in the the trailer) trades on Ryan’s hetero masculinity; his launchpad was the Mickey Mouse club – hardly a hotbed of radicalism.

Ryan finds the meme funny in an embarrassing kind of way – you can see him reading some of the original “Hey girls” here – we don’t think he’s yet commented on the feminist version. We’re not sure what it all means but  guess it at least shows that, contrary to popular opinion, feminists do have a sense of humour.