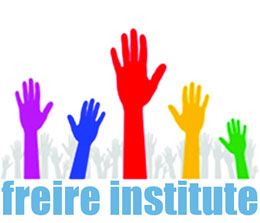 The Paulo Freire Institute-UK (PFI-UK) has now been relaunched at the University of Roehampton as an interdisciplinary research centre, with particular interest in feminist engagements with Freirean perspectives, methodologies and pedagogies.

The PFI-UK is part of a large, international network of Paulo Freire Institutes worldwide, with its closest affiliation to the PFI-University of California, Los Angeles (UCLA), headed by Professor Carlos Alberto Torres. This has led to fruitful collaborations, including the Biannual Forum Paulo Freire, with a core strand on gender and education, which was co-hosted by the PFI-UK and held at UCLA in September 2012. Additionally, the PFI-UK contributes to intensive sessions on feminist theories and methodologies and on gender and education as part of the PFI summer programmes held at University of Trento and UCLA. The PFI-UK aims to make a unique and significant contribution to the international PFI network, by engaging feminist reconceptualizations of Freirean approaches, as well as other critical perspectives, to explore the structural, cultural, symbolic and discursive dimensions of pedagogical relations and inequalities across intersecting differences and identities (such as formations of gender, class, ethnicity and ‘race’). The PFI’s research and pedagogies are deeply informed by Freirean and feminist praxis and methodologies.

As part of this, the PFI-UK has set up a Doctoral/Postdoctoral Network on Gender, Social Justice and Praxis, directed by Dr Lauren Ila Misiaszek. As a starting point, a small group of Founding Members will each work closely with and mentor an early career researcher to develop a small-scale project that makes a concrete contribution to the development of feminist approaches to education and pedagogy (for example, in the form of an online resource).

The PFI-UK will have a relaunch event on the 6th June 2014 with keynote speaker Professor Carlos Alberto Torres, who will also launch his new book at the event: First Freire: Early Writings in Social Justice Education (soon to be published Teachers College Press). Discussants will include Professor Roger Dale, University of Bristol and Professor Penny Jane Burke, University of Roehampton.

PFI-UK aims to create dialogic and participatory spaces of praxis across national and local networks of teachers, educational practitioners and leaders, activists, artists, students, community groups and researchers dedicated to social justice in education. We hope that you will join us in developing this work!