The Centre for Higher Education & Equity Research (CHEER) at the University of Sussex hosted yet another unique and seriously important event on Monday last, December 2nd 2013. This was feminist reflections on the Robbins report on higher education, which had been published 50 years ago, in October 1963(London: HMSO, Cmnd. 2154) (http://www.educationengland.org.uk/documents/robbins/)

Given that this report was seen by most policy-makers and political commentators as inaugurating the mass expansion of higher education there have been a number of celebratory anniversary events, for example at the London School of Economics (LSE), where Sir Lionel Robbins was then a professor of economics, and at the University of London’s Institute of Education, hosted by its Centre for Higher Education Studies (CHES). What was remarkable about the various other events was the lack of attention to questions of gender and equality in higher education. 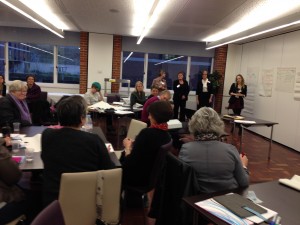 This lacuna was more than amply filled by the event at CHEER on Monday. (All the papers and videos can be downloaded from the CHEER website http://www.sussex.ac.uk/education/cheer/).  As was announced before the event, the University of Sussex, founded in 1961 as one of several new universities to open up opportunities, was delighted to host the event. And arguably as a product of that important period of democratisation and expansion, CHEER wanted to revisit a core value of the Robbins Report , namely that university places should be available to anyone qualified to apply for them. Robbins also foregrounded gender: in the 1960s fewer women undertook higher education than men. So has the expansion of higher education encouraged democratisation and how has the gender agenda unfolded and unravelled in the last 50 years?

Professor Carole Leathwood, director of the Institute for Policy Studies in Education (IPSE) at London Metropolitan University provided a superb analysis of what she called ‘the genealogy of the woman student’. First of all, she invited us all to consider her approach, using a Foucauldian analysis to show how history meshed with current and contemporary issues. Secondly she had undertaken a documentary study of the text of the Robbins report and of a number of popular publications, most especially the Beaver, the student newspaper at LSE, as well as other national newspapers and feminist texts, such as the work of her namesake Carol Dyhouse. Carol, a social historian at Sussex, had published two feminist studies of women and universities, namely No Distinction of Sex? Women in British Universities, 1870-1939 (1995) and Students: A Gendered History (2005).

The essential point of both Carols is that women were considered entirely in relation to men as sexual and social beings. So both the Robbins report and the various newspaper clips that we were shown were about seeing young women students as ‘dolly birds’ or as sexy, and as available on ‘the marriage market’ rather than for the labour market. Interestingly, the Robbins report spent time considering where women students were and developing arguments about how to expand provision that would take account of women, but it never once considered women in the academic profession, as lecturers or researchers. And of course, it never considered the question of anything other than heterosexuality. On the other hand, there were discussions about pregnancy and motherhood and about adult learners, raised in the Robbins report. Indeed Carole Leathwood argued that the start of the British notion of lifelong learning might stem from this era, along with the mature woman student, although social class was barely mentioned.

Miriam David, Visiting Professor in CHEER, followed this discussion, by providing more detail about the position of female and male students at the time of Robbins and nowadays, contrasted with female academics, and the role of feminist activists in academia (based upon her forthcoming book Feminism, Gender & Universities: Politics, Passion and Pedagogies (Ashgate, 2014)). Her paper was entitled HE and SHE: Gender and Equality in Higher Education. She drew on David Willetts, the Minister for Universities and Science, in the coalition government, who had written a pamphlet for the 50th anniversary of the Robbins Report entitled Robbins Revisited: Bigger and Better Higher Education (and published by the Social Market Foundation, 2013). Willetts had had the figures re-analysed by government statisticians from the report. What it showed most clearly is a changing gender balance from female students being 25% of the then student body of less than a quarter of a million, to being about 55% of undergraduates today, when there are over ten times as many – well over 2 million in the UK. Willetts acknowledges the changes but he does not bother to comment on what is happening to staff in academia, tending to agree with the old-fashioned views expressed in the Robbins report about the marital and power relations between men and women. Whilst these changing student figures mirror international studies, such as UNESCO’s Atlas of Gender Equality in Education (March 2012) (see previous blog on the GEA website), in Europe and the USA, all also contend that women tend to disappear the more they are educated, such as through doing a doctorate. She Figures, statistics from the European Union, makes this point very strongly. Perhaps the point is made most strongly though in the UK through two contrasting reports of the now independent Equality Challenge Unit. It publishes annual statistics on staff and students in higher education across the UK in separate volumes. What is most alarming is that gender inequality is rampant amongst staff in UK universities, with 80% of professors being white men, whilst gender equality is so normative amongst students, as no longer worthy of comment. So what can be done to create a more feminist-friendly future in universities?

The afternoon session of the seminar was devoted to Professors Valerie Hey and Louise Morley both of CHEER, acting as Pollyanna and Cassandra respectively and considering how to change the situation and imagine the university of the future, and especially in 50 years’ time, and the position of feminism within it. These discussions had been prefigured in an ESRC seminar series, http://www.sussex.ac.uk/cheer/esrcseminars.

We were all then invited to consider various scenarios in small groups, chaired and led by Rebecca Webb, a doctoral researcher in CHEER and affiliated to the Centre for Teaching and Learning Research in Sussex. This was a most lively and invigorating session, in which we began to consider an alternative to austerity, to a university in which critical and creative thinking once again had centre stage, and where ethical values, not economic value, as Louise Morley put it so passionately, was pre-eminent.  We all left the seminar feeling exhausted but hopeful: CHEER had created an inclusive and open space for feminist debate and discussion to thrive, whilst the immediate outside context remained severely constricting and constraining by an intransigent and intellectually vacuous government. The two key ministers for education – David Willetts for Higher Education and Michael Gove for Schools – vie with each other for presenting the stern and firm smack of government or ‘back to the future’, where ‘boys will be boys’ and girls don’t exist except as bystanders.