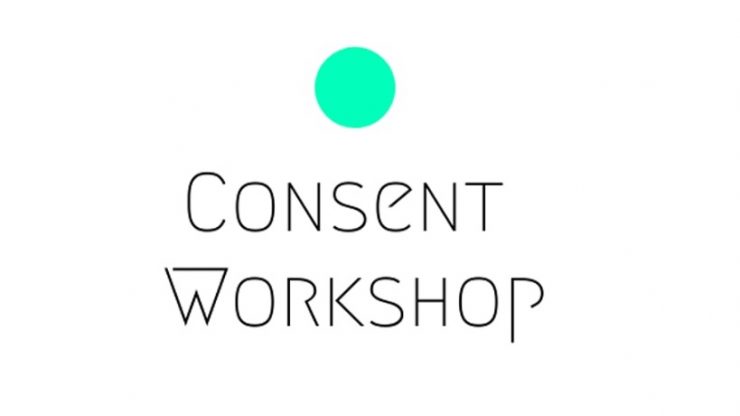 Natasha Richards and Gemma Connell are current PhD students who are both interested in how performance can be utilised as an effective tool for exploring issues of consent. Natasha works more specifically with young people and theatre, providing relationships and sex education through workshops and performance, while Gemma uses dance and spoken word in working with survivors of gender violence, stroke survivors and those with disabilities and mental health conditions.

After meeting at the CHASE Feminist Network Annual Conference in 2019, they realised that they were exploring similar topics through their respective practices in theatre and dance. They decided to team up to deliver a one-day workshop exploring the so-called “blurred lines” of consent through participatory exercises including theatre, dance and spoken word. The workshop aimed to open discussion around every day issues of consent, including “banter” and potentially problematic parental guidance, and how these could lead to wider issues of sexual harassment, sexual violence and victim blaming.

Let’s start this post with a disclaimer: we don’t need to advocate for talking about consent on a platform like this, as we’d be preaching to the converted. However, we would like to advocate for discussing the issues of consent using creative and participatory exercises, as we feel it opens up the opportunity for new perspectives and deeper understanding of the topic of consent.

We wanted to pilot our theories with a small group of other artists and academics, so that we could gain feedback and to see how our ideas worked in practice in a smaller (and safer) environment. It is always risky to trial new ideas, even more so with sensitive topics, and so we were very grateful for those that joined us in our first pilot workshop, held at The University of Essex in February 2020.

We began with a series of introductory tasks, asking participants to think about what consent means for them in situations presented to them by us, the facilitators. For example, a statement was read out and each individual had to consider how far they agreed with the statement, one statement being – “It is ok to read your partner’s text messages.” These tasks led onto honest discussion, where participants could hear from others,as well as present their own opinions. As facilitators, we encouraged participants to consider in detail not just what their opinion was, but why they held that opinion.

Natasha ran a theatre workshop, whereby the participants were introduced to a character, Stacey. They were presented with a monologue from Stacey, which detailed an incident of sexual harassment at school. They were given the opportunity to ask Stacey questions and to give Stacey some advice. After the workshop, one of the participants commented that “the Hot Seat theatre activity in which we were introduced to Stacey was very effective, and introduced numerous considerations affecting consent within a school environment, including peer pressure, banter culture and teacher involvement.”

After the monologue and hotseat, the participants were invited to create freeze frames based on three different characters: Stacey, the perpetrator and the bystander. Creating the images, and then being an audience member to the images of others, gave the participants a platform to explore the different roles and emotions within instances of sexual harassment.

After lunch, Gemma introduced her own practice, beginning with a short extract of her own dance and spoken word performance, Lies My Parents Told Me. This performance explores ill-conceived advice that parents may pass onto their children, opening up a discussion about lies and how they relate to issues of consent. What is a ‘good lie’? When do such lies cause harm?

The main task for the participants in this section of the workshop was to remix the wording of the current laws on consent in England and Wales (click here for more info on legal definitions of consent in the UK) and to generate simple choreography to accompany spoken word versions of these remixes. The remix exercise was welcoming to people unsure of dance and/or spoken word. The participants noted that they found themselves analysing the law on consent without being told to analyse it; reinforcing the notion that playing around with something can help to unlock different interpretations without that being the main focus or intention.

The workshop was a huge success, with one participant stating:

“It was compelling to explore the topic through the embodied experience of playing characters and experimenting with movement. I gained a new perspective on how the arts can allow exploration of the ‘grey space’ of consent. I also was inspired by how vital conversations about consent can be had with young people in creative ways that facilitate their self-expression.”

Using theatre, dance and spoken word techniques, we have discovered that discussions of consent can change through the creation process. Whilst generating dialogue and movement based on the topic, participants question their motives and those of others, in ways that they haven’t experienced before.

Going forward, the aim is to run the one-day workshop in different contexts and evaluate the participants’ responses. An idea is to encourage universities to run the workshop in freshers week. We want to challenge the way people think about consent in society; not just consent to sexual acts, but where does consent affect the everyday lives of all of us – adults and children alike?