On Friday the 2nd of November, in an event entitled Young Masculinities: Challenges, Changes and Transitions the British Sociological Association’s Youth Study Group turned their attention to masculinities, an area receiving ever increasing academic attention in light of both the concerns of ‘the problem with boys’ as well as shifts within contemporary theories of masculinity. These shifting theories of masculinity have been usefully brought together in relation to education in particular in a recent article in Gender and Education by Chris Haywood and Máirtín Mac an Ghaill (October 2012), who suggest that “studies of masculinity in education are reconsidering how masculinity is being constituted” (2012: 580). Thus, while researchers within the field of gender and education have had masculinity as a central site of analysis for some time, in the case of the BSA’s Youth Study Group, masculinity has been noticeably absent as Steve Roberts, the group’s co-organiser remarked when opening the seminar. Although education acted as an investigatory location for some of the papers (Cann, Ingram, Kehler, Schalet), education as a specific avenue of investigation for young masculinities was interestingly not at the forefront of the papers being given. Forms of education could nonetheless be observed in the papers offered, with young men learning about acceptable forms of cultural consumption, learning about codes of conduct within particular subcultural contexts, learning to regulate themselves, and applying what it means to be a ‘man’ in transition(s) to the work place. The relationship between education and young men was therefore located, in most of the papers, at the level of social and cultural practice rather than at a formal or institutional level.

Ten papers were given during the course of the day-long seminar, which reflects not only fullness of the schedule, but also the wealth of research taking place within the field of young masculinities. While the schedule was bursting at the seams, so too, was the room, which represented the eagerness to have these conversations. The lively and stimulating discussions that followed the ten papers that were given, demonstrated both the enthusiasm and debate that is representative of this diverse academic field. The ten papers that were given varied from small-scale qualitative to cross-national quantitative investigations that explored masculinities both within the context of education, as well as, and mostprevalently, in relation to leisure spaces.

The first session was opened with four presenters, whose papers focused broadly upon the intersections between masculinity, youth and culture.  The opening two papers, given by Victoria Cann (University of Easy Anglia) and Nicola Ingram (University of Bath) both problematised 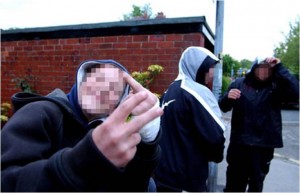 Connell’s theory of hegemonic masculinity by highlighting the complexities of the youth experience with investigations that took part in schools in England and Northern Ireland, respectively. In Cann’s focus on taste as a regulating force for young masculinities and Ingram’s use of Bourdieu to raise questions of the usefulness of the term ‘lad’, a clear sense of the changing landscape for young boys within schools was presented. Focus then moved from ‘everyday culture’ to subculture as a means of understanding contemporary youth masculinities. Gabby Riches (Leeds Met) considered the moshpit as a space for young men to work through and consolidate the ‘crisis of masculinity’, while Karenza Moore (Lancaster University), used a participant’s term ‘sausage fest’ to describe the gender inbalance within northern trance culture. This session therefore highlighted the nuances of young, masculine cultures within leisure spaces, and required the audiences to consider young masculinities outside of a homogenous experience.

The second sessions then continued this, but with an international twist, placing debates of young masculinities within a broader global context. Amy Schalet’s (UMass, Amherst) fascinating paper, which focused on the findings from her book Not Under My Roof (2011), provided understanding of the distinctions between masculinities, sex education, and the parenting of boys in different national contexts (Holland and America). Cristina Macnau (INCSMPS) also considered different national contexts, in this case using large-scale European data to raise questions of the differing ways in which homophobia limits the occupational choices made by young men in Slovenia, Lithuania, Poland and Hungary. Nation-specific papers, presented by Charlie Walker (University of Southampton) and Michael Kehler (Western University, Ontario) also highlighted the nuances and challenged specific to young males. Walker’s longitudinal research painted a rich picture of the economic and occupational challenges faced by young men within the context of post-socialist Russia, while Kehler’s focus on the gendered body within adolescence considered privilege in corporeal rather than economic terms. The challenges that beset young males were therefore underlined, and the audience were asked to consider their understandings of young masculinity within contextually specific locations.

The final session, with papers from Rory Magrath (University of Winchester) and Brendan Gough (Nottingham Trent), considered transgressive masculinities, providing the most direct challenges to Connell’s hegemonic masculinity theory which has been a key feature within contemporary theories of masculinity. In this session, Magrath followed the work of scholars such as McCormack and Anderson to argue that homophobia is declining within football cultures, while Gough raised questions of how one ‘does masculinity’ within the context of metrosexual male grooming. By broadening our understanding of the spaces that masculinities can occupy, this session challenged some of the most normative assumptions of masculinity, a provocative final session for many.

The day closed with a keynote address from Eric Anderson (University of Winchester), who, in his unforgiving attack on Connell and promotion of inclusive masculinity theory, offered an energetic close to the day. It was in this address, that the key themes across the day were cemented, that young masculinity theory is at an exciting crossroads, where hegemonic masculinity is being complicated by empirical study and where inclusive masculinity theory may provide us with more useful answers and mechanisms of analysis. The success of the day leads one to believe that that it is with no doubt that this seminar marks a continuation of the new and exciting directions for the study of young masculinities being undertaken within the context of gender and education, both in Britain and beyond.