The conference, held on 19th July at Lancaster University (9.00-6.00) was attended by over 54 people, 16 speakers and 38 paying delegates. It was sponsored by the Centre for Gender & Women’s Studies, the Faculty of Arts & Social Sciences and the Department of Organisation, Work and Technology at Lancaster University as well as the Gender & Education Association.The purpose of the conference was to bring together diverse stakeholders and academics in the field of social and health care to dialogue about relevant issues, including technology, migrant workers, ageing populations, unions, and the support issues that affect the labour of different types of paid care workers—for the elderly and children. Delegates were placed at five tables in order to converse with one another. Bringing practitioners and academics together enabled the conversations around care to be grounded in reality and allowed for the care workers to remain front and centre in all of the discussions. The Gender & Education Association funded six practitioners in coming to the conference, by paying for their travel. These were two domiciliary carers, one of which was a migrant, an advocate for young victims of sex abuse, a health visitor, a care advocate, and a care home manager. These practitioners each spoke for 15 minutes about ‘a day in their lives’ and then a facilitator initiated a discussion about insights, opinions, and questionsaround the topics that were then reported to the larger group. In evaluations of the conference many delegates reported that they most enjoyed this session.

The conference began with a talk by Eileen Boris, focused on the differences and tensions between the “caring society”  (social justice) and the “carework economy” (the market). The history of home care workers in the U.S. was explored with implications for lessons for Britain’s care sector.  There are parallels between the two countries with globalization. Yet the role of slavery in the U.S. made care work a field dominated by Black women with immigrant women 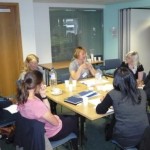 replenishing the workforce later in the 21st century. Yet real wages were in decline in comparison to other fields. Still the role of home care workers has risen in line with the demands of an ageing society in the U.S. and elsewhere. Unionization has been advocated by workers but with few broad-based changes. Women workers have a service ethos which the industry depends on to keep it going. Next the panel on gender and care featured conference organizer, Gemma Wibberley who reported on her doctoral study on women domiciliary care workers, and Sharon Holder, a GMB organizer. Both papers discussed the ways that gender was an underlying variable in holding down wages in care and exploitation, and challenged the audience to consider this issue in light of their own work histories and perspectives. Other audience members contributed ideas such as the Gangmasters License (by an Oxfam representative) in enforcing better working conditions. Next at lunch time a unique partnership between CETAD (Centre for Training and Development), School of Health and Medicine, Lancaster University and three NHS Trusts in Lancashire delivered a poster presentation on Developing a Multi-Agency & Multi-Professional Approach to Practice  Education  to Meet the Changing Nature of Work in NHS Care Settings. The afternoon featured a panel on education and training with Lesley Gill, from Care Sector Alliance Cumbria introducing issues in training and problematizing it, with Sondra Cuban discussing how migrant women with a higher education are not safeguarded from workplace exploitation and deskilling in social care.  Both presenters supplemented their papers with videos demonstrating the issues. Katie Willocks explored the blurred boundaries for maternity care assistants, and proposed that collaborative training for midwives and care assistants could increase clarity in their role. Next a paper given by Professor Christine Milligan discussed the attributes of good care in the voluntary sector and by families and the ways technologies mediate new forms of care as well as new actors. Finally a paper by Rosie Cox closed the day with a discussion about the current working conditions experienced by au pairs and their positions in the global market economy as well as in London. The day ended with the practitioner round tables and then a raffle.

We appreciate the support of the Gender & Education Association in enabling this conference to be well attended and informed with content from practitioners.