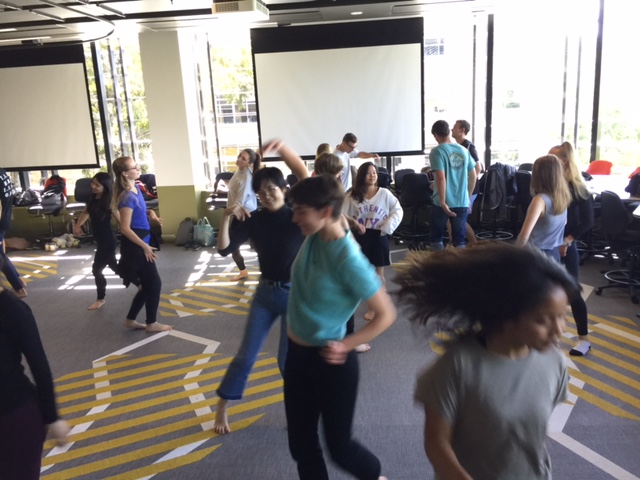 C2C: What feminism’s got to do with dance
by Tamara Borovica
Twitter: @Blackie_in_Ozz

As a PhD candidate researching gender and the body, I find the key themes of this Gender and Education Conference – working through temporal, spatial, material and disciplinary borders – as appealing and challenging at the same time. My interest in the body as an active and agential assemblage comes from witnessing some of the extremes of human suffering, violence, hope and resilience when I was growing up in now ex-Yugoslavia, in 1990s. While most of these experiences carried a strong affective and emotional charge and made many of us irreversibly different, I got curious about the ways people continue to ‘become’. When as an adult I begin working with young people in Balkans and across Europe, my interest was in noticing complexities, contradictions, open-endedness and unevenness in their continuous becomings, even when situated in what appeared to be a grip of social structures. The same interest led me to discover and eventually start teaching dance as a form of embodied inquiry and to how the idea of this research was born.

My interest in the body as an active and agential assemblage comes from witnessing some of the extremes of human suffering, violence, hope and resilience when I was growing up in now ex-Yugoslavia, in 1990s.

In my work on the embodiment of womanhood, I imagine embodiment as relational, interconnected, always in flux and becoming, as a part of various assemblages and in numerous encounters (some of which are increasing and some decreasing bodily potentials). To explore young women’s embodiment, I have conducted a performance ethnography with a group of Melbourne University students interested in creative methods and feminist issues. We were a group of non- dancers who danced to produce and explore new feelings, thoughts, ideas, sensations and/or creative artefacts about embodied womanhood, in order to, potentially, open up ‘the affective economy’ of our bodily beings. The paper I will present, ‘Dancing the strata- affective flows of moving/dancing bodies and the possibilities for becoming otherwise’, will illustrate my approach to researching the embodiment of young womanhood where I aim to engage with the materiality of (human and more-than-human) bodies while attuning to movement, rhythm, fluidity, multiplicity and flows.  This paper will focus on one encounter of dancing bodies where we danced with the strata (categories such as sex, gender, race, ethnicity, religion, sexuality, age, and ability) to look at what embodiment of these categories produces for young women’s lives and how our bodies take an active role in this production.

At the beginning of the third year of my Candidature, I can profoundly benefit from presenting at conferences such as Gender & Education, where a number of academics are engaging in similar kinds of work. More than a few of G&E scholars have been influential in informing my approach to this research, and I am looking forward to being further inspired by their work presented at GEA2017. Until we meet in London!

If you are attending conference, let us know on Twitter using the hashtag: #GEAconf2017