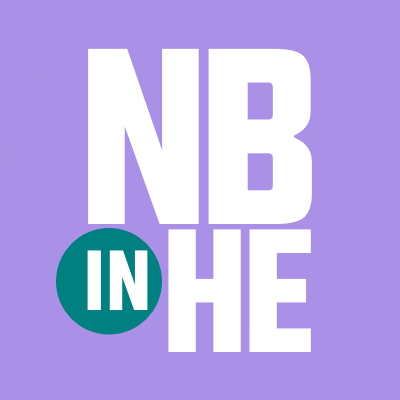 I’m looking forward to what will be both my first GEA conference, and the first time presenting a paper on the Non-Binary in Higher Education research project. My co-researchers Jennifer Fraser (University of Westminster), Raf Benato (City University), and I are conducting this project with the aim of better understanding how non-binary people, that is folk with gender identities that fall outside the male/female binary, move through higher education as both staff and students. More than that, we want to imagine what higher education, its institutions, its curricula, its teaching practices, might look like beyond the gender binary. Our project is ongoing and will include public events, skills sharing, interviews with staff and ‘future dreaming’ sessions with students.

Our GEA paper will start to discuss the findings from our recent online survey which was completed by over 350 non-binary higher education staff, students and alumni in the UK. An initial overview of the survey findings has started to reveal some of key struggles for non-binary people navigating higher education. Most of these reflect experience on the margins of cultural intelligibility – the lack of language, the lack of understanding, the lack of space (literal and metaphorical) in which to exist, the constant post-binary gender chore of explaining oneself to administrators, students, colleagues or tutors. Experiences often reflect the wide variation in the steps institutions have taken towards recognising and making space for people to be something other than male or female as they work or study. But, while there are the horror stories, there are also glimpses of what it is possible to carve out, both in the classroom and beyond, to make being non-binary possible in higher education today.

Our desire to do this research has undoubtedly come in part from our own experiences as non-binary and genderqueer academics who know only too well the ins and outs of university administrative systems and the day to day expectations, misreadings, misgenderings and the subtle and not so subtle erasures that shape non-binary life. Despite nearly eight years as an out non-binary academic this is still a daily reality for me, and one which I am still working out how to intervene in effectively. The irony of being the non-binary person who stands up in front of a conference to talk about being a non-binary person in higher education is that I don’t have the answers and can’t tell you how to avoid the pitfalls because I’m usually in one at the time!

Added to that, negotiating the academic conference itself offers up a whole other range of potential challenges. Although we haven’t specifically focused on conferences as an aspect of non-binary academic life in our research, I have always encountered them as curiously fraught spaces. It was actually attending a queer conference in Berlin back in 2010 that not only introduced me to someone using gender-neutral pronouns in real life for the first time, but helped bring in to focus my own need to re-name both myself and my gender. The thing about conferences is they often literally involve labels in the form of the ubiquitous conference name badge. Appearing under my unambiguously gendered former name at this conference felt particularly suffocating, the name tag failing to adequately capture either the kind of queer I felt I was, or the deep ambivalence I felt about the gender it signified. I’m not saying I only subsequently changed my name so I could have it on name badges at academic conferences…but I’d be lying if that wasn’t part of it!

Even with my more ambiguous name proudly printed on my name badge, conferences are still an unknown quantity for the non-binary attendee; will there be pronoun stickers? Will there be a gender-neutral toilet? Is it going to be the kind of gender conference where gender means women and everyone assumes you are one (even if you’ve shown up to give the talk on non-binary)? I’ve been both delighted and disappointed over the years and suspect that will be the case for many years to come.

For more information on the Non-Binary in Higher Education Research Project please see our website: https://nbinhe.com or follow us on Twitter: @nbinhe You can also email us at: NonBinaryinHE @ westminster.ac.uk

If you are attending conference, let us know on Twitter using the hashtag: #GEAconf2019