This page considers the role of ethnicity in gender debates on education. It begins by clarifying key terminology and then considers why ethnicity is important in debates about gender. It continues by providing some examples from the media and popular media and, finally, looks at key patterns of educational attainment by ethnicity and gender.

The terms ‘race’ and ‘ethnicity’ are often used interchangeably both in mainstream and academic discourse. However, as shown below, they have very different meanings:

An ethnic group is one whose members have common origins, shared history or culture that brings them together in a shared sense of collective identity. All human beings belong to an ethnic group or have an ethnicity. Non-specialists often use the term ‘ethnic’ to refer to those from Black and minority ethnic backgrounds or to things (such as food or dress) that are not Western. This is not strictly accurate since White people also belong to ethnic groups.

It is common, when collecting data on ethnicity in the UK, to use the main 16 + 1 ethnic group categories that have been suggested by the Office for National Statistics. These are listed below:

There is no such thing as separate human races in a traditional biological sense. ‘Race’ is understood by most academics and scientists to exist as a result of historic categorisations that continue to be reinforced in contemporary society. This is why some writers continue to use the word and sometimes place quotation marks around it to denote that they recognise it as socially constructed. David Gillborn (in Racism and Education) describes ‘race’ as: “a system of socially constructed and enforced categories that re constantly recreated and modified through human interaction”.

Of course there are those (e.g. extreme right organisations) who argue that there are clearly demarcated racial groups who can be identified through their intellectual or cultural inferiority. However, it would be a mistake to assume that racism just exists amongst these groups. Racism in mainstream society is still common and tends to occur in more subtle or coded forms, for example, through racist stereotyping and treatment of Black and minority ethnic groups.

Why is ethnicity important when considering gender?

Gender is not a stand alone identity construct. It works alongside or ‘intersects’ with other axes of differentiation (e.g. social class, ethnicity, age) to inform experiences that might overlap in some cases but which are very different in others.

The African American scholar Kimberlé Crenshaw is widely credited for placing the concept of ‘intersectionality’ on the academic map. She argued, in Mapping the Margins, that: “the problem with identity politics is not that it fails to transcend difference, as some critics charge, but rather the opposite – that it frequently conflates or ignores intragroup differences”.

An intersectional approach is one that attempts to acknowledge and take account of these ‘intragroup differences’. Intersectionality has been described as: “the complex, irreducible, varied and variable effects which ensue when multiple axis of differentiation – economic, political, cultural, psychic, subjective and experiential – intersect in historically specific contexts. The concept emphasizes that different dimensions of social life cannot be separated out into discrete and pure strands” (Avtar Brah & Ann Phoenix).

African American feminist bell hooks points to some useful examples which highlight the importance of intersectionality in her book Wounds of Passion in which she describes her personal journey to becoming a writer. Reflecting on her experience of the Women’s Studies class at Stanford University where her peers and teacher are white, she notes: “the shared reality of femaleness does not mean an equal share in powerlessness. … Race makes the difference. And it is enough of a difference to preclude the possibility of common oppression”.

hooks explains that all women do not experience disadvantage in the same way. Power, for example, in relation to access to resources and racial discrimination means that notions of female inequality vary across ethnic group.

Examples from the media and popular culture depict how gender and ethnicity can come together in different and complex ways.

The 2009 book and subsequent film The Help tells the evocative and moving story of the lives of two African American maids in 1960s Mississippi and their relationships with the white women they work for:

I reckon I know pretty well what would happen if the white ladies found out we was writing about them, telling the truth a what they really like. Womens, they ain’t like men. A woman ain’t gone beat you with a stick … It’ll be a knock on the door, late at night. It won’t be the white lady at the door. She don’t do that kind a thing herself. But while the nightmare’s happening, the burning or the cutting or the beating, you realize something you known all your life: the white lady don’t ever forget. Aibileen (central character in The Help by Kathryn Stockett)

The story helps us appreciate the importance of adopting an intersectional approach to understanding gender. Concepts of privilege, power, social class and whiteness are central themes and reveal that while they have their gender in common, life chances and experiences were very different for the Black and white women in the story.

Another example of the way ethnicity shapes experiences and understanding of gender differently, is evident in an article about representations of female beauty published in The Observer newspaper in March 2012.

Some black and white truths at last

Praise be. An American poll has turned many media myths about women on their head

The feature (written by Victoria Coren, a white female journalist) draws on findings from a recent US survey to argue that exclusion from mainstream fashion and beauty press means that Black women are happier and more confident than their white counterparts who, despite being frequently depicted in the press, are self-conscious and insecure about their body image.

The article provoked a great number of reader comments and created a storm on Twitter with many Black and minority ethnic women arguing that Coren had failed to acknowledge how lack of equal representation actually was damaging to racially minoritised women and, the way in which they are in fact affected by pressures to fit Western ideals of attraction.

Reproduced with permission from UKBlackfeminist UK

“There is harm done to black women because of the conspicuous lack of acknowledgement that we are attractive beings.” MissCElliot (2012 co-founder of BlackfeministUK).

Depending on the number of privileges someone has, she or he may experience the power of choosing the types of struggles in which to engage … The holder of privilege may enjoy deference, special knowledge or a higher comfort level to guide societal interaction. Privilege is not visible to its holder; it is merely there, a part of the world, a way of life, simply the way things are. … White privilege derives from the race power system of white supremacy. Male privilege and heterosexual privilege result from the gender hierarchy. Class privilege derives from an economic, wealth-based hierarchy. (Wildman with Davis, in Critical White Studies: Looking behind the mirror).

With regard to gender and ethnicity in education, there are distinct patterns that can be seen in the data. The graph below shows the percentage of pupils in England and Wales attaining five or more A* to C grades (including Maths and English) in GCSE and equivalent in 2010/11. The principal ethnic groups are shown across the horizontal axis. The purple bars represent girls and the lilac bars represent boys. The graph shows that girls’ attainment is on average higher than boys across each of the main minority ethnic groups. We also know that girls and boys from non-manual backgrounds tend to score better, by and large, than those from manual backgrounds. For more information see our social class resource page. 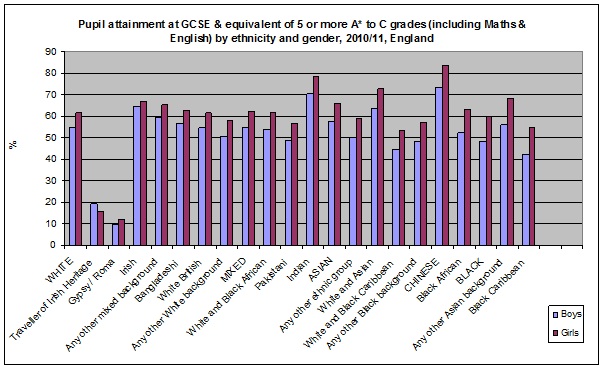 However, there are other points that become evident when we look at the data more closely. For example, we can see that the general pattern of girls attaining higher than boys is not true for pupils of Traveller heritage. (Although due to high rates of mobility, caution must be exercised when interpreting the data for this group). Also, the gender gap varies across ethnic group. In 2010/11, 12.5% more Black Caribbean girls achieved five or more A* to C grades at GCSE and equivalent (including Maths and English) compared to their Black Caribbean male counterparts. This is the largest gender gap for this academic year.  While such variations in the data are important to note, we also should consider whether it is meaningful or useful to look at the data in this way. For example, even though Black Caribbean girls attained considerably better than their male counterparts, they actually performed below the national average for all girls (54.8% and 61.9% respectively) and amongst the lowest (with Mixed White & Black Caribbean) for all female pupils. Yet, despite this Black Caribbean girls seldom feature in discussions about gender and academic attainment and most government initiatives have tended to focus on role models and mentoring for their male counterparts.

Real Histories Directory: This is an online resource tool for teachers, parents, pupils and the wider community to support them in teaching and learning about cultural diversity in the UK. Users can add resources to the existing database, search by region and keep up to date with forthcoming events.

Mutliverse: UK collection of resources on teaching and diversity.

Brah, A. & Phoenix, A. (2004) Ain’t I a woman? Revisiting Intersectionality. Journal of International Women’s Studies, 5 (3), pp. 75-86: Useful critique of a one-dimensional notion of femininity and overview of key 19th Century debates amongst feminists involved in anti-slavery struggles. Discusses how axes of history, social class, race come together to shape diverse experiences of femininity.

Gillborn, D. & Rollock, N. (2010) Education, in A. Bloch & J. Solomos (Eds.) Race and ethnicity in the 21st Century. Basingstoke, Hampshire: Palgrave Macmillan: Provides an overview of key debates in education with regard to gender, ethnicity and social class. Considers quantitative and qualitative evidence with suggestions for further reading.

McIntosh, P. (1997) White Privilege and Male Privilege: A personal account of coming to see correspondences through work in Women’s studies. In R. Delgado & J. Stefancic (Eds.) Critical White Studies: looking behind the mirror. Philadelphia: Temple University Press: White female academic describes her journey of recognising her whiteness and privilege. She provides a list of examples of how she is privileged by being white.

Rollock, N. (2007) Legitimising Black academic failure: deconstructing staff discourses of academic success, appearance and behaviour. International Studies in Sociology of Education, 17 (3), pp 275-287: Considers stereotypes associated with Black pupils and particular forms of dress and how this can affect their experiences of school

Rollock, N. (2012) The invisibility of race: Intersectional reflections on the liminal space of alterity, Race Ethnicity & Education, 1, pp. 65-84: Sets out the importance of race and social class to considerations of gender and the way in which race is often invisible in mainstream educational debates about gender.

Wright, C., Weekes, D. & McGlaughlin, A. (2000) Race, class and gender in exclusion from school. London: Falmer: Examines educational policy and their impact on exclusions from school. Also discusses the role of gender, social class and race in the exclusion figures.