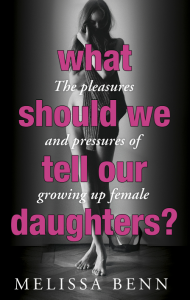 Three cheers for Melissa Benn! Members of the Gender and Education Association (GEA) should be delighted to have such an excellent advocate of feminist work on women and education in today’s complex and contradictory society. Whilst this is a journalistic account, it is an engagingly written and pleasurable read about the dilemmas of being a woman in today’s increasingly pressurized, pornified or sexualised and hyper-capitalist society. What Melissa sets out to do is to provide a map of where we, as women are today, and what we can do for the future. She specifically wants inter-generational conversations about how feminists have dealt with the past and how that can frame arguments about how to work for a feminist-friendly future. She is not starry-eyed about the gains that feminists have made over the last century or so and sets those against the increasing gulf between rich and poor women, and the rise of the austerity culture. She decides to interrogate second-wave feminists mainly about what they have done, and what evidence they can muster about the changing culture, politics and society, together with some choice male writers and academics, to set an agenda for ‘our daughters’.  She organizes her arguments into three parts, each of which has an aphorism for its concerns: the first she calls ‘uneasy beginnings’, the second ‘promises, promises’ and the third ‘rebellions and resources’ and she has an epilogue which is her manifesto for the future.

From the perspective of educators and parents, mothers especially, the first part of the book is where she presents what we know today about schooling and higher education linked together with the increasingly important feminist work on sexuality, sexual abuse and the pornification of our culture for young women. She provides a quick romp through recent work on how girls are doing better than boys in educational achievements at school and university but how this poses a huge problem given the pressures to be a particular kind of sexually attractive woman almost to the point of becoming invisible. Girls have to be  good but thin in a tick box culture. She contrasts this evidence with the important work on how the culture of laddism – male, macho, popular and raunchy – is increasingly pervading higher education. She questions what advice mothers can offer their daughters about sex in this kind of culture of objectification and the myth of perfection. Here she revisits the debates about puberty and adolescence in the context of single-sex versus co-educational schooling and the changing role of fathers in relation to their daughters. And she relies on a couple of key male writers here for her evidence, ignoring younger feminist academics such as Emma Renold and Jessica Ringrose, who have done such sterling work on children’s gender and sexual cultures based on interviews. She also doesn’t think to question the young people themselves for their views about growing up and living in a sexualized and pornified culture. This might have been the start of an interesting new conversation about relations between the generations and the futures of feminist studies.

The second part of the book considers what we know about women’s adult lives today in terms of work or employment, sex and love, and balancing work and life: this last is what she calls breakpoint. Again she romps through some interesting work on graduate employment and looks at highly achieving women as professionals and corporate feminists. She uses as part of her title of the first chapter in this part of the book the title of Sheryl Sandberg’s liberal feminist manifesto Lean In. Sheryl Sandberg is the chief operating officer of Facebook and has written about, as the sub-title puts it, women, work and the will to lead. Melissa takes this as the starting point of her critique and yet also uses it seriously as others have also done, about female professional achievements in the business world such as Alison Woolf in The XX Factor . Melissa does also look at the downsides and raises important questions, for example, about sexual harassment at work. And she goes on to provide a sober reappraisal of feminism as not being about the corporate world but women entering an unequal world of work. This is followed by a chapter about changing forms of sexual relations in an increasingly neo-liberal society. Here she also discusses changing feminist critiques of women’s understandings of sexuality and their bodies. And she moves swiftly into changing forms of work and motherhood, so that work-life balances are no longer the same as they were for older generations of feminists, so-called vintage feminists. Indeed, her Melissa argues that we have reached ‘breakpoint’.

The final part of the book considers what we now know about how to campaign for change and how to effect that change. She reviews feminist evidence about the uses of political campaigning and argues that there is a need for anger, but that it can easily be subverted particularly in an internet age. She provides a long discussion of how women’s anger is, and has been socially unacceptable, using the phrase that ‘anger means social and romantic isolation, imprisonment in the attic of social unacceptability’. (p.244) So she recognizes how difficult it is for women to learn how to be confident and powerful feminists. However, this part of the book, it seems to me, is the weakest section, as Melissa seems to have lost the will for collective and political campaigning and is more concerned with addressing the question of how individual women need to learn resilience and confidence in an increasingly individualized and competitive society. And yet she tries in her final chapter to think through the new politics of campaigning in an age of austerity and one where more women now have entered traditional democratic politics. She does not consider here more local or community-based activism but focuses more on singling out some key feminists in trade unions and the dilemmas of being a woman Labour politician. But she does conclude that ‘…our daughters may need help and support in order to learn to speak up and speak out for themselves; collectively, we need to move away from the traditional rhetorical, quasi-Oxford-Union/parliamentary form of public discussion and explore other ways of holding conversations’.

This is one of the final boxed statements (see below) and it does seem to me to indicate a weakness at the heart of the project. This book is not for an academic and certainly not for an academic feminist audience. This is also clear in the manifesto in the epilogue. This is a short and poetic piece of writing, using feminist polemicists such as Mary Wollstonecraft and Toni Morrison, as well as addressing the question of ‘the exceptional woman who refuses exceptionality’, taking the term from Carol Gilligan. Here the book ends as an advice rather than campaigning manual to be read in a cosy armchair, perhaps with one eye on the ipad, internet, twitter or whatever.

Whilst this is a most important book, there are several problems with it. First and perhaps most importantly, whilst Melissa discusses anger as important to this feminist political project (in part 3) she tells us she shies away from anger and recognizes that this means that a broader feminist politics based on a thorough-going critique of a misogynistic or patriarchal culture is not what she intends. Hers is a liberal politics of cosy conversations. Second, and equally important is the selective use of evidence, without much explicit theory to explain it. Post-structural feminists might be surprised to note absolutely no references to Judith Butler! There is also no questioning of the younger generations of women, whether feminists or academics or both or none. Melissa is an excellent journalist and superb at summarizing a mass of evidence. I was totally in awe of her knowledge of a huge range of feminist books and texts, especially those that have come out in the 21st century, and mainly of the genre of market feminism, like the Fifty Shades of Feminism which was produced without any critical edge at all. But in the end this needs to be located in more critical theory not just represented as if it were now the truth. Third, and perhaps this is the key point – this book is for a large and wide market and it shows in presentation and style. The shocking pink cover print together with a naked girl covered with a towel is a most odd marketing device, as is the use of highlighted boxes of comment dotted across the text one of which I mentioned above. These are not in service to the bigger project of transforming the world for a feminist-friendly future.