For a long time I didn’t connect my identities as a feminist and as a vegan. Now I do, or at least I’m beginning to, and this blog is a short attempt to trace some of these connections and to argue that consuming animals is a feminist issue. I’ve called myself a feminist for over 20 years but I only started to go vegan about five years ago, in that I started trying to avoid eating and generally using products derived from nonhuman animals. With all drugs in the UK currently tested on animals, 100% vegan purity is impossible but for me veganism is about actively living in ways that minimise my dependence on animals, a dependence which is always premised on exploitation and on actions that would be classified as murder, torture and slavery were they applied to humans.

Perhaps it’s not surprising that I struggled to connect the politics of animal rights and women’s rights. When I go to feminist events, including gender and education seminars and conferences, I’m one of very few vegans (sometimes the only vegan) and there are usually large amounts of meat being served. Recently a feminist called veganism a lifestyle choice. She does not construct living anti-racism or feminism as a lifestyle choice, so what makes it possible for her to see living anti-speciesism in this way? Another feminist, in an undergraduate lecture on childhood, compared the small number of UK laws protecting children with the much greater number protecting nonhuman animals. She had a point that we do not take our responsibilities towards children seriously. But the parallel to animals is problematic. We neither breed children to test drugs on them nor slaughter them for food: two activities which define animal/human relations. The large number of laws ‘protecting’ animals is evidence of how badly we treat them for we need laws regulating cage sizes, rest times for animals being transported and when and how we should experiment on them.

Becoming vegan, like becoming feminist, involves a shift in consciousness. Early on I understood that if wecan torture people partly because we see them, not as humans, but as animals, then we can torture them because we countenance that behaviour towards animals. However, explicit links to the theory and 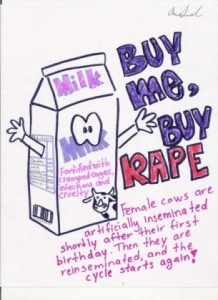 politics of gender took longer and developed through my encounters with various books. I read Virginia Woolf’sFlush, a biography of the dog who was poet Elizabeth Barrett Browning’s companion-animal. Here, as in her pacifist polemic Three Guineas which links militarism and masculinity, Virginia Woolf prefigures later feminist ideas. In picking up this slim volume I expected to ponder the conventions of the telling of lives in biographies, but instead felt compelled to think about the human/animal division and about parallels between the oppressions of animals and of women. I also chanced upon Donna Haraway’s When Species Meet. Among other things, in this book, Haraway, following feminist rereadings of Marx through women’s unpaid domestic labour, rereads Marx through animal’s unpaid labour. This provoked questions for me about how far our feminist theories and praxis would change were we to take all animal lives seriously.

These questions are taken up by Carol Adams, in The Sexual Politics of Meat and her other work. In a deliberately provocative use of language, she challenges feminist complicity in the “trafficking of animals”. Her work suggests the limitations of feminist thinking that does not theorise the oppression of nonhuman animals alongside other oppressions. How can we challenge the public/private divide when we uphold the right to privacy in the decision to consume animals? How does maintaining a distinction between humans and animals reproduce the category of the ‘natural’ that has been and remains so damaging to women (from claims that women are naturally less intelligent than men to claims that men are naturally predisposed towards rape)? Why do we see parallels between women and children’s position in the family but not incorporate domestic animals within this picture? Animals, like women and children, are subject to both psychological and physical domestic violence and these violences often occur within the same families. Why do we fight for women’s reproductive rights but ignore the exploitation of the reproductive organs of chickens and cows intrinsic to egg and milk production?

If the personal is political then meat is a feminist issue.

2 thoughts on “Meat is a Feminist Issue”