Written by Jane Goldman and starring Aaron Johnson (a British actor known best for playing John Lennon in ‘Nowhere Boy’), Chole Moretz (last seen in the remake of the ‘Amityville Horror’) and Nicholas Cage, this movie was hailed simultaneously as

pay someone write my paper

being ‘cynical, premeditated and mindbogglingly irresponsible’ (The Daily Mail) and, ‘a thoroughly outrageous, jaw-droppingly violent and very funny riff on the quasi-porn world of comic books’ (The Guardian). Wherever it went Kick Ass stirred emotions, fired debate and ultimately made a lot of money. The cause of the controversy? Hit Girl, an 11 year-old wise cracking, knife wielding, karate kicking female superhero-in-training. But is Hit Girl a Feminist icon for the 21st Century?

The movie essentially is another adaptation of a comic book series but sits rather uncomfortably with the likes of X-Men, Iron Man and Spiderman. Its point of departure from these hugely successful Hollywood franchises is in its self-conscious awareness of the rules of the genre, in its questioning of the very notion of the meaning of the ‘superhero’ and its willingness to turn all of the associated rules on their head and to shove them down the throats of the viewer.

The plot goes like this: Dave Lizewski is an average American teen. A breast-obsessed comic book fanatic with two equally geeky friends who is bullied and robbed at school. He tells us that, ‘Like most people my age, I just existed’. However a conversation at the local comic shop leads Dave to question why ‘thousand’s of people want to be Paris Hilton and nobody wants to be Spiderman’. So Dave makes a stand, buys a lurid scuba suit online and re-invents himself as Kick Ass, a crime fighter whose first attempt at dealing out justice goes horribly wrong: he is beaten and stabbed and run over and ends up in hospital having metal grafted onto his broken bones a la Wolverine. Kick Ass tries again and is filmed (on mobile phone of course) intervening in a nasty three-against-one beating, he becomes an overnight You Tube sensation and even makes the John Stewart Show. Kick Ass attracts the attention of martial arts and weaponry-trained father and daughter duo Big Daddy and Hit Girl who are hell bent on avenging the death of Hit Girl’s mother and our hero is dragged into a fight to the death with local crime lord Frank Di Amico.

It sounds fairly standard but the greatness of this film lies in its playfulness with the genre of the comic book adaptation. It is a beautifully filmed homage to the Spiderman trilogy and the movies of Quentin Tarantino and John Woo that continues the far gentler ‘The I 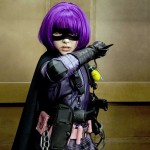 ncredibles’ and ultimately Nietzsche’s questioning of what it is and means to be ‘super’. There is no radioactive spider or mutated gene for Kick Ass, he is simply a boy with the right blend of ‘optimism and naivety’. Hechallenges what we know, or what we think we know about the genre and the figure of the male superhero. There is actually nothing remarkable about Dave/Kick Ass. His initial beating leaves him with damaged nerve endings but he still feels pain like the rest of us, so he is not super-strong and has no superpowers. He gets the girl of his dreams after a long stint of pretending to be gay – she always wanted a gay ‘BFF’ – and so, compared to the hyper-masculine figures of Spiderman, Batman and Iron Man, both Dave and Kick Ass are deficient.

In fact, the most capable character to survive the movie is the 11-year-old Hit Girl who herself raises many questions for the viewer. The feminist viewer may find her/himself tied in knots by this character. On one hand she is strong, capable, self-reliant and brave in a way that is scarcely seen. On the other hand she is manipulated by her father in a manner that could be read as abusive into becoming a killer, and, as she says herself she ‘never plays’. So she is simultaneously a child and not a child. This aside her liberal use of the ‘c’ word alone is sure to raise eyebrows in many quarters. But I loved her. I loved her because she is such an antidote to the women we usually see in movies of the genre who are usually posited as the appendage of (and inevitably in need of rescue by) the superhero – Peter Parker/Spiderman’s Mary-Jane a case in point. There are women with superpowers in comic book adaptation movies, but their tendency is to be either the ‘eye candy’ or romantic interest of the piece. For example the masculine-to-the-point-of-being-an-animal Wolverine is the protagonist of X-Men with Phoenix and Mystique providing the sexual tension. There can be no such relationship between Kick Ass and Hit Girl, she’s 11 – a point that is reiterated when one of Dave’s friends says he’s in love with her and is remonstrated by his companion. Therefore there is no sexual tension between Kick Ass and Hit Girl, just respect.

I also loved her because she is a girl in the literal sense and rarely in film do we see girl protagonists. I concede that Hit Girl’s abilities come from a pushy (and revenge-fuelled) father but nevertheless she is self-reliant and capable in a manner I’ve not seen since Newt in ‘Aliens’. She challenges what we think about girls, and about girls 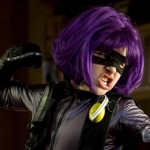 and violence and, although I can’t condone violence, the viewer is left in awe as she spins around the screen finishing off bad guys. She also acts as an antidote (and I’m going to have a bit of a rant here) to the way in which women are treated in the many re-makes of slash-shocker 70’s movies such as ‘The Hills Have Eyes’ and ‘Last House on the Left’ in which the rape and abuse of women is used as a device for moving the plot along. Hit Girl has a purpose, she is there to challenge us, to show us that there are alternatives to a ‘prefix-man’ superhero and that girls can be powerful too. She also has a happy ending – we see her enrolled at school seeing off the bullies who earlier in the movie relieved Dave of his iPod, phone and money. Is she a feminist icon? The answer is complicated. On the one hand she is, she’s a self-reliant, capable young woman who conquers the masculine environment of organised crime. On the other she only resorts to violence, and she is who she is because of the domineering masculine influence of her father. She’s here to provoke us so watch the movie and let me know what you think

One thought on “Does Hit Girl Kick Ass?”