Homeland is a US television series based on an Israeli show, Prisoners of War. It centres on CIA agent Carrie Maddison, played by Claire Danes, who in dramatic opening scenes is told by a source that a US marine has been ‘turned’. When a few days later US marine Nicholas Brody, played by Damien Lewis, is rescued after eight years in captivity, Carrie is convinced he’s the marine in question. Alongside Brody’s heroic homecoming we follow Carrie’s increasingly obsessive attempts to prove him a traitor. Carrie’s an unusual female character so in this post we begin a conversation about her which we plan to continue as events unfold each Sunday night. We hope you’ll join in. The show is full of twists and turns so don’t read this unless you’re up to date with the latest episode shown on the UK’s Channel 4 (or you don’t mind knowing what happens in advance). If you’ve seen ahead of this and you add comments please alert us to any spoilers.

Heather: I’m looking forward to the new episode of Homeland tonight. Last week’s [series 1, episode 9 – ‘Crossfire’] which filled in Brody’s backstory, showing his personal experience of US brutality and hypocrisy which led him to turn against his own country, was my favourite so far. When they revealed early on in the series that Brody had converted to Islam I reckoned that he couldn’t be a ‘traitor’ because that would be too obvious and line up too easily with the idea that all Muslims are bad. But the writers found a way to do it that makes it almost impossible to be reductive about the characters and their motivations and very difficult to match their identities to dominant discourses about the civilised West vs the uncivilised East. But leaving that aside and turning to gender, what stands out for me is Carrie. She’s not an unusual character for US television – highly professionally driven, not great at interpersonal relationships, with mental health issues – she reminds me of Gregory House. But it’s very unusual to see a female character like this. I can’t think of any others. When Brody and Carrie become involved in a sexual relationship and escape to a woodland cabin together the scenes between them are great. Carrie gives away that she’s had him under surveillance and instead of trying to cover, she admits that she thinks he’s working for the enemy and questions him. By prioritising her work over their beginning relationship, Carrie seems remarkably un-invested in romantic love and being in a couple. In this and other scenes, she could come across as a freak but she’s at the centre of the show and we see things so much from her point of view (her words not Brody’s dominate the title sequence) that we can’t help but empathise with her at least some of the time. 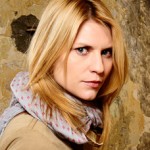 Claire: I think at some points the show does ‘fall’ into the trap of suggesting that Carrie needs another person in her life – see tonight’s episode [series 1, episode 10 – ‘Representative Brody’] where she is very upset when Brody has clearly decided to end their liaison and focus on his family.  And I found myself a little sad that they wouldn’t be together (despite really liking the character of Jess – Brody’s wife).  But that just demonstrates how strongly we have come to expect and some of us – yearn – for ‘romance’ in our consumption of films / television.  Yet, it does this alongside showing how Saul is lonely and mourns the loss of his personal life, which he has scarified for the calling of the job (and/or the thrill of it?).  After tonight, it will be interesting to see
what, beyond ‘getting the bad guys’, the show has in store for Carrie – will her personal / emotional life continue to be explored? I can’t imagine they will return to the Brody / Carrie intimacy connection as it would jeopardise too much for Brody’s new-found political career.  I hope they continue to work her character and deepen it.

But do these stand-out female characters need to be so ‘dysfunctional’ in terms of their personal lives?  Carrie Madison in Homeland, Sarah Lund in The Killing, and just this weekend – Saga Norén (pictured) in The Bridge… is it something about women in law enforcement that calls for them to either have Asperger’s syndrome (as it has been claimed Saga’s character does in The Bridge), or be committed to the cause beyond their families (as Sarah Lund and Carrie Madison)?  But it was a classic and excellent moment in Saturday’s The Bridge (episode 2) on UK’s BBC4 when Saga, it seems almost as if as an after-thought, masturbates after coming out from the shower and then decides to go out and pick someone up for sex, have sex in her apartment and then get out her laptop and continue her work to find the killer!  Thinking of other lead female characters of late which I love – Alicia Florrick in The Good Wife and Birgitte Nyborg in Borgen – in a way these women represent more ‘real life’ ideas of women with whom I, at least, can identify a little more and yet are extremely interesting and impressive.

Heather: I agree that there’s an undercurrent in Homeland of Carrie’s desire to be in a couple (last night as you point out and in last week’s episode when she expressed regret at realising she’s going to spend her life alone). But I don’t think this is gendered in the usual way because, as you say, you also have Saul struggling with the same issues. Although Carrie feels desire for some kind of relationship with Brody this desire is complicated by being mixed up with her experience of watching him in his home on surveillance cameras for weeks – in her own personal version of Big Brother – and implicated in her professional need to find out whether or not he’s working for ‘the other side’.

I watched The Killing but not the other shows you mention but there’s also Helen Mirren in Prime Suspect to add to the list of driven crime solving women who struggle with their personal lives (though none of these ‘difficult’ women are in US shows except Carrie). My favourite strong female characters are younger than yours – Buffy Summers (pictured) in Buffy the Vampire Slayer and the eponymous Veronica Mars. Both spend much of the time in heterosexual couples, if difficult ones – especially Buffy whose two most significant sexual relationships are with vampires.