Thanks to the Gender and Education Association’s support, Feminist Readings Network held a dissemination workshop in suburban Paris in mid-December 2016. This was an occasion to come together, older and new members, to debate and invent meanings and practices for the young network that aims to approach reading as a pedagogical, creative, transformative movement. 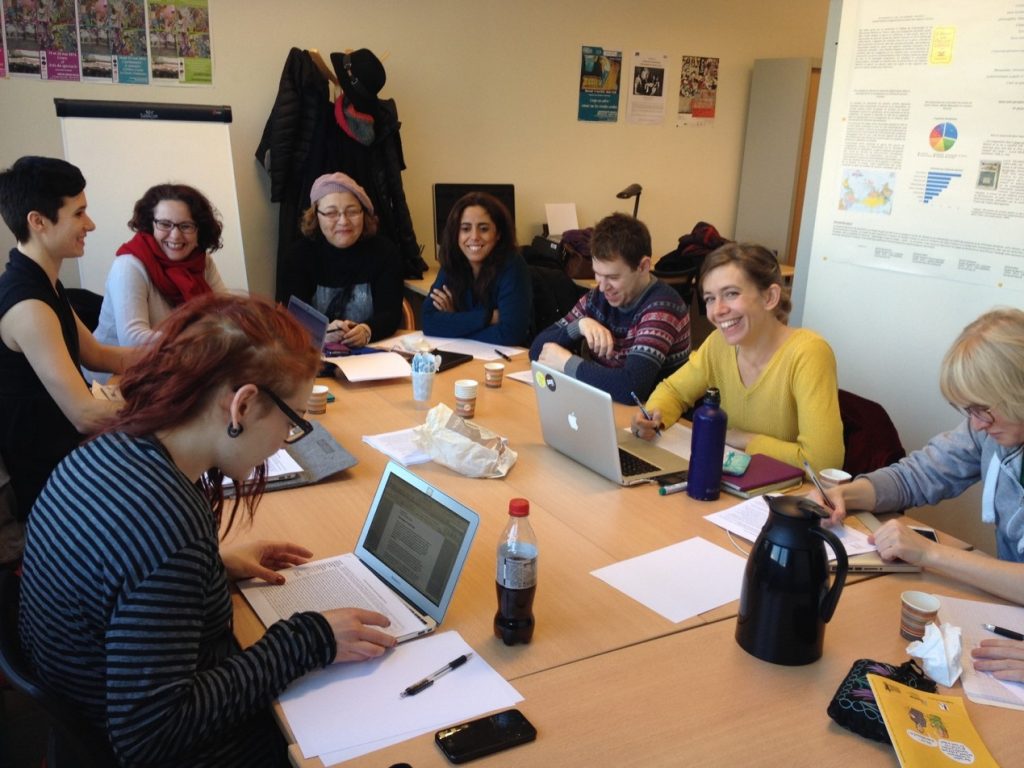 The first day, six members of the network met to discuss the practicalities of organising a new network at Ivry-sur-Seine, in the southern suburb of Paris at Laboratoire d’études de genre et de sexualité (LEGS). The following day an open workshop took place at the Paris 8 University in Saint-Denis, a northern suburb of Paris. Here a group of participants coming from Leeds, Paris and Helsinki came together for a day of activities, discussing main ideas and practices that the network will engage with and push forward. The question we put to ourselves was: how can we help create a platform, not only for our work but feminist research more broadly?

Practical matters, involved with setting up a new international network, were obviously a key concern as well as more theoretical issues. We, thus, pinpointed some central challenges and key directions for a transnational and bi- or even trans-lingual network across several geographical locations.

We began with the important task of tracing the history of the network so far. It began in 2015 in Paris with the first bilingual event Lectures féministes/Feminist Readings.  Thanks to our energetic participants from Leeds another event was held in the following year in Yorkshire, and now our colleagues in Helsinki are organising another symposium where we will come together and share our research.  In our workshop we reiterated the initial ideas behind the network and consolidated our main ideas going forward. In particular, we noted our desire to work together not only as academics but also as feminists and creative thinkers interested in cultivating and nurturing transnational friendships.
We discussed the specific issues relevant to early career feminist researchers. Talking about how we are situated, not only intellectually but also institutionally and geographically. As such, we stressed the importance of trying to figure out what are the particular feminist practices that each context calls for. One of the key questions we thought about was how can the network work for everyone with our different locations, languages and contexts individually respected? Developing feminist readings as a creative and transformative tool has its roots in our concrete situations to start with, in the mix of cultures, languages and disciplines that create the conditions for thinking about and practising intersectionality and transdisciplinarity inside and at the borders of the academia.

Given this history, we were particularly happy to talk about the call for papers for the upcoming symposium in Helsinki on May 26th and 27th 2017. Feminist readings III will revolve around feminist writing, based on our collective experience that reading and writing are indeed not separable from each other. Helsinki organisers were free to choose the shape of the two-day event, and during the workshop discussion all the participants were inspired by their idea to organise the event partly outside university premises, and to encourage presentations in between academic and artistic formats.

While our South African partners could not physically participate in the workshop, we were in touch with them by mail and thought hard about the importance of shifting perspectives outside of central Europe for the network. This included practical issues, for example call for papers need to be shared with enough time for people to raise funds and get visas to come to events in Europe. Thinking about this raised a bigger point: partners who are not based in Europe are often expected to come to European countries, more than the other way around. As it stands, the Feminist Readings Network will work toward events outside of Europe, in South Africa in 2018. We also talked about organising workshops in North Africa, since several members of the Paris 8 research group have important networks in Maghreb countries. This led us to discuss the importance of practicing intersectionality and transnational feminism through inventing modes of action that do not always favour those with European passports. 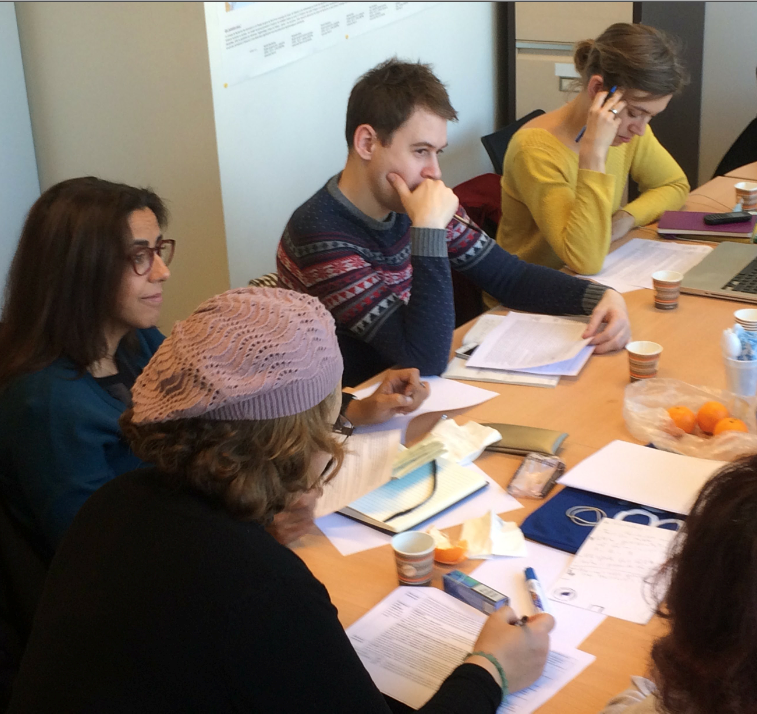 The final aim of the workshop was to talk about the challenges of disseminating feminist readings and create ideas for the pluri-lingual website, which will be launched in February. All participants were invited to contribute to an intensive brainstorming around the website. The aim with the website is to create a central platform to connect ideas and disseminate our work. Doing this we hope to get more people involved in feminist readings of all kinds!

The main challenge of the website is building a bi- and pluri-lingual online space capable of attracting different readers. We want to share information about the events we organise so more people can get involved and archive online the work already done, while also keeping it a lively and interesting site for people to encounter.

Two interesting ideas put forward were the “feminist reading of the week” and the “pluri-lingual dictionary for feminist terms”. The first one would be a weekly changing very short “feminist reading”, addressing something that just happened, that we just read or saw, whether it comes from an old book or from a scene on the street. The latter is imagined as a space that challenges – to a certain degree since the texts will often still be written in English or French – the hegemony of our two main languages. We want to take specific terms related to feminism and gender from languages such as Kabyle or Finnish that do not exist in English or French. Through the dictionary we want to try and describe what their presences allows in their respective languages, or what is left unsayable in other languages by such an absence. We also aim to write about the ways different terms and concepts coming from hegemonic languages have been translated into e.g. Czech or Afrikaans.

For the participants, the workshop was a much welcome opportunity to (re)connect with other feminists passionate about gender issues and the many ways to read them, inside and outside academia. It was inspiring to exchange ideas with colleagues and peers who are looking to forge new writings and readings and to seek out international feminist alliances. We all felt this as something that is deeply important as we face political regression that is often coupled with university cutbacks and intellectual setbacks.

Check out our earlier post. If you would like to join Feminist Readings Network, or to offer suggestions about any aspect of our project please get in touch!