Back in the day, I remember my mum repeating the old slogan “Sticks and stones may break my bones but words will never hurt me”. I think it was in the context of some kids in my kindergarten class teasing me. Thankfully it was not a scarring incident and I don’t exactly remember the nature of the insults. However, I do remember that saying. I reflect on it now in reference to my mothers’ upbringing that consisted of a difficult relationship with her naval father in the south west of England. She embodied a sense of ‘toughness’ and to ‘never let them make you cry’. She still recommends this way of being today and constantly espouses that it is one of her strengths- that the people around her will never see her emotions and never know if they affect her. So in the context of my life it wasn’t a saying that was out of character. Indeed, it made a lot of sense back then. Sticks and stones could hurt you (as my sisters often showed me); whilst in comparison a few verbal insults were surely manageable.

It’s strange now, however, reflecting back on that time when that comparison seemed relevant and straight forward (as it was intended). The social reality that the saying adhered to no longer exists in its purist form. The world has changed and is constantly evolving within an environment where words have become far more accessible, visible and powerful than the proverbial sticks and stones that they were juxtaposed against. There are no longer simplistic social realities that consist of the ‘either verbal or physical violence’ understanding. Instead, there are whole new planes of existence and meaning making that interleave with our physical world. These function to actively and constantly construct knowledge and norms and police the boundaries of difference. Understandings about what is normal, acceptable and celebrated in our social spheres are constantly promoted; while those that don’t fit become marginalised.

Yes, I am talking about Facebook (as well as other ICT mediums). The ‘new’ modes of communication have entered our lives and the lives of most students in the developed world as a complementary social sphere. Facebook is an amazing phenomenon to view and to study in the realm of social interactions. We surround our digital selves with our ‘friends’, passions and areas of interest. We plan our events and publish photos and statuses for all (or some) to see and review.

As a medium, it functions largely through language- textual language presented in settings where individuals are surveilled by countless others and arbitrated on through ‘likes’ and ‘comments’. These linguistic deployments 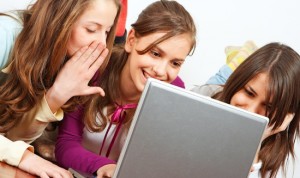 become the main source and form of performances and the predominant foundation of collective meaning making. Many say that this world is separate; that it is ‘digital’ or that it is ‘ICT’, when really it is interwoven in our corporeal world like never before. Simplistic examples of carrying supercomputers in our pockets fail to encompass the web of social networks and carriers of social meanings that we are integrated in at all times.

So, where do the sticks and stones come in? How do we compare the old saying when there are no (immediate) physical concerns or violent comparisons to make? The main power in these environments is not physical, and the meaning behind linguistic productions becomes amplified in environments where this is the only source of meaning that there is. Where interactions may have formerly been face to face in small groups or between individuals, or over the phone in one on one scenarios, interactions have now become performances to be judged by audiences that may be conceptualised as infinite. Arbitrary observations on life or reflections on recent experiences become products for consumption by friends and acquaintances, or by anyone. Self surveillance increases and sociocultural values are constantly defined and applied to individuals through simple clicks of a button.

Perhaps Facebook has come to embody the ultimate form of  Foucault’s Panopticon, where the “surveillance is based on a system of permanent registration” (p.196); we are consistently ‘checking in’ and ‘updating statuses’. We achieve “the penetration of regulation into even the smallest details of everyday life” (p.198) as we reside in “a state of conscious and permanent visibility that assures the automatic functioning of power” (p.201). Put simply, we adjust our displays and performances to suit a particular conception of the reality that we reside within. Simultaneously we participate in the monitoring and regulation of others through our participation in the assessment process; commenting on and ‘liking’ particular performances and rejecting others. Although these activities may seem innocuous; our collective actions function to establish performative knowledge, understandings and boundaries. Indeed, these actions reflect Foucault’s understanding of ‘disciplinary power’; where “it is the fact of being constantly seen, of being able always to be seen, that maintains the disciplined individual in his subjection” (p.187). We maintain our performances, what others know of us and expect of us as we are aware of our constant surveillance. The intention of the interactions becomes irrelevant in light of our perception of our expected subjectivity. The knowledge of our performative boundaries shifts again when more vitriolic language and intent is introduced; targeting those of a specific sector of the community. These performances manufacture even more power in establishing sociocultural hierarchies as they illustrate the realms that we should not move within.

These processes have significant implications for our gender performances. We constantly define what it is to be a girl or a boy, a man or a woman, or equally, what is an acceptable gendered subjectivity with infinite levels of consideration and implication. Individual investments in ‘groups’, ‘memes’, ‘events’ or YouTube videos function to mark gendered boundaries. The frequent employment of comments such as “gay” or “faggots” on objects that individuals ‘dislike’, serve as simplistic but powerful reminders that particular gendered lives are less valuable than others. Through their public nature, they function to illustrate the discursive boundaries of gender and to normalise or make abject a range of identities.

Some may say that the solution to this is simple; to just ‘not get on Facebook’; but this additionally has implications. Facebook doesn’t represent a separate, dangerous world. It represents a reflection, a literal exacerbation and deconstruction of our personal social realities. By seeing the ways in which people around us represent experiences and events we are able to see how they do that in a ‘real’ way. Indeed, Facebook is no less real than our physical interactions. It has become an extension of our physical world and our friendships, our desire to know about people within (and outside of) our social spheres. Facebook is no more ‘dangerous’ than it is ‘exceptional’, it simply ‘is’, and can be accessed and utilised in ways that are relevant for any individual desires. ‘Power’ as Foucault sees it, is not necessarily imposed upon any one object or person- it cannot be represented as only identifiable weapons. Rather it is exercised in an environment that we constantly and actively engage with. Facebook as an institution creates the possibility for regulation- gendered and otherwise, but our active participation in its processes is central in maintaining the ongoing sense of surveillance and of social regulation. It’s easy to say that epithetic deployments on Facebook represent something that children, adolescents or adults should be shielded from or should be legally resisted, but perhaps it is more important for us to critically review these deployments and enhance the ongoing dialogue about their meanings and functions. They are deployed to achieve something, whether a simple insult, ‘joke’, or a wider sociocultural form of regulation. We are all impacted by status updates or comments; but our awareness of these impacts and our potential responses to them are the fundamental concerns of our ongoing integration with Facebook and other forms of social networking.

Until individuals can identify and analyse that gender discrimination or more broader forms of social regulation are embedded within language, and that damage can be achieved by other means than ‘sticks and stones’, Facebook interactions will always remain ‘dangerous’. Increasing critical knowledge informs the ability to recognise discrimination or negative interactions for what they are and what their results can be.