Historically, in the UK and other European countries, the figures of the learner and the scholar have been associated with being care-free (i.e. with having no primary responsibility for dependents). These days, universities have considerably diversified, both in terms of their workforce and of their student population. Students with caring responsibilities now represent a significant presence in academia. According to the Student Income and Expenditure Survey, 8% of full-time students and 36% of part-time students who are English-domiciled are parents (Johnson et al., 2009). The National Union for Students established that, altogether, a third of Further Education and Higher Education students in England and Wales care for a dependent (NUS, 2009).

Yet, when it comes to care and carers, a discourse of invisibility prevails in the policy and physical spaces of English Higher Education, as we found in a recent study supported by the Nuffield Foundation. It is worth reminding here that the Higher Education Statistical Agency does not require that universities collect data on students’ caring responsibilities and that this group only gets, at best, a quick mention in national policy texts. At an institutional level, some universities do provide a wealth of provision for student parents and acknowledge their presence in their documentation and interventions, while in others student parents are made invisible. However, the default construction of the student as care-free never gets completely challenged. To some extent, research is not immune to this discourse of invisibility. Even in the case of research exploring the experiences of ‘non traditional’ students and foregrounding other aspects of individuals’ identities (such as gender, social class and ethnicity), the importance of care in individuals’ lives is not reflected by the place allocated to it in conceptual apparatuses. Most of this work (including my own) reduces care to some sort of contextual, even anecdotal, information. While there is a quickly expanding scholarship in this field (e.g. Brooks, 2012; Hinton-Smith, 2008), studying and parenting remains very much uncharted territory.

The support received from the Nuffield Foundation allowed the research team (Charlotte Kerner and myself) to conduct fieldwork in ten English universities, analysing their websites and documentation, and interviewing student parents and members of staff. As well as gaining a better understanding of student parents’ experiences, we wanted to appreciate how university policies contribute to the formation of these experiences.

The study shows that, when navigating ‘careless’ academia (Grummell et al., 2009), student parents face a range of issues, with three main themes emerging from their narratives: time issues; financial difficulties; and health and emotional problems. Time-related issues, in particular, occupy a prominent position in the stories told by student parents. Discussions of the ‘lack of time’ and of the conflicting spatio-temporal demands of being a parent and a student are common occurrences. These time issues are often compounded by the fact that some student parents are also in paid work (with some, in our study, working-full-time) and that most continue to keep the main responsibility for domestic and care work. This latter aspect is maybe not so surprising considering that the large majority of student parents (in our study and in the national HE population) are women, with these more likely than men to undertake most of the domestic work (EUROSTAT, 2003). In a cultural context where ‘intensive mothering’ has become the dominant script, mothers are expected to spend considerable time, emotion and energy on their children (Danna Lynch 2008, Douglas and Michaels 2004). Similarly, work in academia keeps intensifying and, as for parenting, has become the subject of an increased surveillance (Calvert et al. 2011). Students, especially postgraduates (among which student parents concentrate), have not been immune to this evolution. The ‘bottomless’ nature of mothering and academic work is thus not conducive to ‘work-life balance’.

While student parents present a variety of socio-economic circumstances, financial issues constitute another widespread occurrence among this group. These are often exacerbated by the costs of childcare (when available), particularly for the parents of pre-schoolers 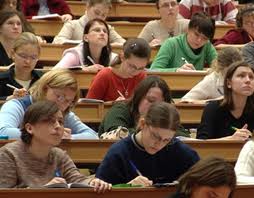 who are not full-time, home undergraduate students and thus are not eligible for the Childcare Grant. This is not completely surprising considering that English undergraduate tuition fees for national students are among the highest in the world, while the part of the net income parents spend on childcare is the highest among all OECD countries. However, it is the health and emotional dimensions of being a student parent which appear the most striking. Some talk of the damage to their health, several mention depression, and most discuss the negative effects of their multiple responsibilities on their well-being. More generally, being a student parent is associated with mixed feelings, since this group is not fitting with the culturally prevalent construction of motherhood, nor with the default image of the carefree student, fully available for their studies. This often results in feelings of frustration and guilt, possibly because ‘care is not only a set of social practices but a strongly gendered one with deep moral connotations’ (Grummell et al., 2009: 194). The prominence of emotions in students’ narratives is in sheer contrast with the construction of this group in policy circles. In particular, many student parents describe their experiences as a ‘struggle’ (Leathwood and O’Connell, 2003). This is a far cry from the carefree and careless lives students are often assumed to live. Similarly, student parents’ narratives disturb Western constructions of motherhood. Their struggles and aspirations do not fit with the clichéd constructions of the working-class ‘pram faces’ or ‘chav mums’, for whom upward mobility is supposedly out of reach, nor with constructions of middle-class mothers as ‘yummy mummies’ who effortlessly (or so it seems) juggle multiple commitments without ever compromising with their body appearance.

Despite the prevailing discursive construction of care as external to academia, student parents’ narratives highlight the intricate relationships between these two aspects of their lives, with many of the issues they face compounded by the very rules of academia. Far from being ‘neutral’ in terms of their effects on different groups of students, university ‘generic’ policies (i.e., those which do not target specifically student parents) can significantly impinge on their experiences (or, on the contrary, ease the tensions attached to their multiple commitments). Timetabling provides an excellent example of this: many university students receive their timetable only a few days before the start of term. Yet, this is not completely bad news: since university policies can compound student parents’ issues, they undoubtedly must have the potential to bring about social change. For example, the development of an on-site childcare provision can make a significant difference to students’ lives and to their families, and so can the ‘mainstreaming’ of care, when generic policies are reviewed in the light of how they affect students with different types of responsibilities. Some universities provide ‘safe spaces’ for this group, spaces in which the default construction of the childfree student does not completely disappear but starts crumbling.

The fact that the current financial and ideological climate in UK academia may not be conducive to social change in relation to care and carers needs to be acknowledged. It is illustrated, for example, by the closure of childcare facilities in many universities. Yet, a policy intervention in this area seems legitimate: since universities compound the issues faced by carers, it seems reasonable to argue that it is their responsibility to act upon this and to tackle what is an equality issue. In the context of a competitive HE market, this can be beneficial to universities as well, as they try to target and attract certain groups of students and to increase the quality of their experiences. It is also worth reminding here that the Equality Act 2010 has extended the anti-discrimination legislation to students who are expecting or have recently given birth to or adopted a child, and to their partner. While the effects of the Act on institutional policies remain to be seen, its potential for disturbing the long-lasting opposition between care and academia should not be underestimated.