A report by Josie Austin and Helen Sivey of Cardiff University on the launch of Professor Emma Renold’s report on young people’s gender and sexual cultures for the National Assembly for Wales.

A dozen young people strode confidently past us into the Welsh Assembly Pierhead’s grand hall as we hovered around the imposing entrance. Like us, they were here to participate in the launch of Professor Emma Renold’s ground-breaking research report on 10-12 year olds’ gender and sexual cultures. This research will inform the National Assembly for Wales’ cross-party group on Children, Sexualities, ‘Sexualisation’ and Equalities. 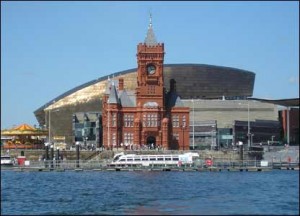 The Pierhead Building in Cardiff Bay

Upon entering the hall we instantly noticed the friendly and relaxed atmosphere, and, having been handed the beautifully illustrated research report, joined the rest of the crowd. The audience consisted of an eclectic mix of people compared to the rather homogenous crowds we are used to at policy-related events, and included over 40 young people, and a range of academic researchers, teachers, third sector workers from local policy to domestic violence charities, policy makers and assembly members. However, it was the presence of young people themselves which made the event feel so different from other research launches, which all too often seem detached from young people’s lives.

The event was chaired by Jocelyn Davies (assembly member, Plaid Cymru), head of the cross party group, who opened the event and welcomed Professor Emma Renold to the stage. She  provided us with a reflexive summary of the research – a qualitative study which included 125 participants – and its sometimes unexpected findings. For example, we heard how for some girls looking older is not about being sexy – an assumption commonly made by adults – but about negotiating greater independence and feeling safe. Other findings included that children regularly experience sexual harassment, are often aware of sexism and desire social change, and that, instead of assumptions being made on their behalf, they want adults to listen to their experiences and viewpoints. Professor Renold concluded with how:

“Many children are critical and angry. They do want change. But they are also aware that just knowing something is sexist or abusive isn’t enough to stop it from happening. How to activate and sustain change is the challenge, and getting together like this, with young people, is one small step in that process. And while they are no quick fix solutions to cultural and societal change, there is a lot of desire from girls and boys themselves to make this happen”

From that last sentence, Professor Renold then introduced us to two school-based activist groups she had been working with for 6 weeks up to the lead-up of the launch. Their confident and captivating performances were the highlight of the event for many of us. First up were Merched Mentrus (Welsh for ‘girl power’), a feminist group from Plasmawr school, who provided us with a poignant performance of their poem ‘Mis(s) Seen’ (printed at the end of this article, and recently published in The Telegraph). The poem highlights the constant surveillance of young women’s bodies, and the group’s performance conveyed the conflicting emotions that these young women experience as a result of it so powerfully that it awakened affective responses in our own bodies. The poem concludes by offering an imagined future in which young women are judged on the basis of their abilities, not what they look like.

Next, students from the DIGON group performed a short drama based upon the key findings around boy-girl friendships and relationships . Ellie (who wrote the script) based each line on direct quotes from the research report and really brought the research findings to life. DIGON (which translates from Welsh as ‘enough’), is another group from Plasmawr School, who performed at the 2011 ‘Young People and Sexualities’ conference at Cardiff University (view the video here) They reflected on how this previous event had given them the confidence to continue their work. Their sketch focused on the casual but crushing homophobia and sexism encoded in school banter, and put across both the physical force and emotional pressure exerted amongst young people to enforce compulsory heterosexual relationships and behaviours. They will be taking this drama into primary schools over the coming year, and working with Emma to film the event and share with a wider audience.

Following these two creative responses using Professor Renold’s research findings, further reflections were offered by the Children’s Commissioner for Wales, Keith Towler, who somewhat jokingly, but mostly seriously, proclaimed his inability to perform to the standard of the young people we just saw, and representatives from the NSPCC (Jon Brown) and the equalities officer from the National Union of Teachers (Rosamund McNeil). They reiterated the importance of sexuality research which focuses on the views and experiences of young people, and reminded us of the dangers and restrictions associated with gender stereotyping.

The programme for the evening then had allocated time for a Q&A session with a panel of the adult speakers; however, Professor Renold suggested that we discard the proposed schedule of events and move directly to roundtable discussions led by the young people. She pointed out that we had heard a lot from adults so far this evening, and that it might be helpful to put the research principles and findings into practice by talking to one another directly, immediately. The apprehension in the room was palpable, but after some shuffling and coffee dispensing (by Professor Renold herself!), we arranged ourselves around tables and began talking.

We can’t imagine a more positive or productive way to enact the importance of engaging with and really listen to young people. And the young people we were speaking to had a lot to say, once given the space and respect to do so. We talked with young people from a range of schools about their experiences, about Tom Daley, being opinionated, and about what they think about adult interpretations of the relationship between young people and the internet. Dozens of similar conversations were filling the room, and when the time came to draw the event to a close, it was clear that nobody was ready to finish speaking. Listen to some of the children’s stories here.

We hope to continue to see more events like this where young people are more fully involved in shaping research agendas and communicating research findings and policy recommendations. We do know that Professor Renold is planning a second gender and sexuality children’s conference next summer (July 2014). Among the many interactive and peer-led workshops from sexism to sex education, she will be working with a dance choreographer so we will not just be sitting and talking, but doing and moving to connect with the research findings and create change. Watch this space.

In one day we can hear

Our bodies are commented on, all day long,

With media telling us how to look, from zero size models and what not to wear, hearing a wolf whistle from an old guy in the street,

Can make you feel appreciated and downgraded

at the same time

Our bodies, commented on, all day long

Commented on, all day long

Wanting to tell someone, but nothing’s going to change

When you do tell someone, nothing does change

If we could press a button, would we want it to stop?

When we get value for how we look?

How would it feel to be free of this?

What would it be like to be valued for what we do, not how we look?

These words make us feel good

How do they make you feel?

Are we just bodies?

Josie and Helen are PhD Students and members of the Gender and Sexuality Research Group (GASP), School of Social Sciences, Cardiff University