The Black Girls Club based in a Community Secondary School

I currently work with a co-educational, multi-ethnic community school located and based in North London. The mission statement for the school is “Motivate Aspire Transform.” These three words are are used throughout the school to engage with the students to achieve their full potential.

The school was approached for black girls currently in year 9, 10 or 11 who would be willing to work together discussing issues on and around feminism. The meeting was selected to take place during lunch time periods. The incentive for the girls was that they would receive refreshments, which would compensate for missing out on their ‘peer-time’ and a hot lunch. Some of the girls were already familiar with my work, as they had previously taken part in some research in the past.

The meetings attracted 10 black girls all from the same year group. Some of the girls were in the same class, whereas other girls knew of each other but did not have much contact. A core group of girls attended all of the sessions as many had commitments during and outside of core school hours. The session consisted of setting the ground rules so that each session would be beneficial to both the girls and the researcher.

The girls were informed that there would be a minimum of six sessions, which would form part of a bigger programme that was being developed on feminism in a selected group of schools. We agreed that the main purpose of the group would be for 1) a safe space for black girls to share their experiences, 2) to explore issues that they had not spoken about before 3) to discuss terms such as feminism, sexism and racism, 4) and anything else they would like to bring to the group.

The sessions were reflective and consisted of getting to know each other through a series of activities. It was noticeable that the spent time together was filled with bouts of laughter and banter, which the girls carried out on each other. As the meeting was during the lunch hour it was time-bound, yet we struggled to keep to the allocated time limit because the girls were often so engrossed with the discussion at hand. As we discussed the various issues in the group our time disappeared very quickly. We always ran overtime and needed to wrap up quickly so that the girls would be able to attend their afternoon classes.

During the first session we drew up ground rules to be used for the duration of our time together. An important part of the session was for both the researcher and the girls to develop a partnership approach in facilitating the group. We wanted the work in the group to be shaped by the girls yet guided by the researcher. At the top of the agenda was the name for the group. We spent around 20 minutes during the second session exploring the purpose of the group and whether that would be reflected in the name. Having an appropriate name for the group was extremely important for the girls and their identity. When choosing the name, some of the girls struggled with being part of a group for Black girls only and expressed concern about what to say to their friends who were racialized as white. At the time the discussion became quite heated as the other girls in the group believed that they, as black girls, need the separate time and space to talk.

Throughout the session, the girls grappled with questions such as why did felt they (as Black girls) needed to explain themselves to white girls, or even felt pressured to include white girls in the sessions, Such question left the girls that expressed concern about the feelings of their white friends confused and concerned about their loyalty to their friendship group. The more vocal girls in the group challenged these girls’ concerns as they believed that all of the girls had been given a choice to be part of the group and at any stage they could have declined.

One of the girls that really took to the group from the very beginning wanted to name it ‘the Black Girls Club’. I remember asking her, “Why? What makes you think that it is a club?” The response from the group was overwhelming as they replied, “When people ask us where we are going we tell them to ‘the Black Girls Club’.” It was one of those “wow” moments. This is when I started to understand the need for the group in the school. The girls were seeking a safe place in which they could talk freely without being judged or questioned by people that did not understand them. A safe place to the girls meant a place where discussion on unspoken issues such as shadism, body shape, relationships and being a black girl were able to develop without feeling the need to justify themselves to others.

One of the sessions discussed a sensitive topic on Black girls and Black boys.  The girls decided on two questions to discuss: 1) What do black girls want in Black boys and 2) What do Black boys want in Black girls? The girls decided to work in groups exploring a particular question then swap and discuss both questions as a whole group. The following images provide an insight into issues identified during the discussion. 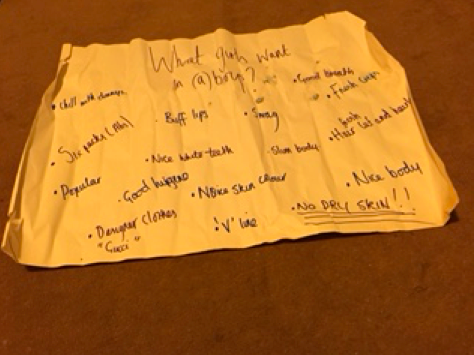 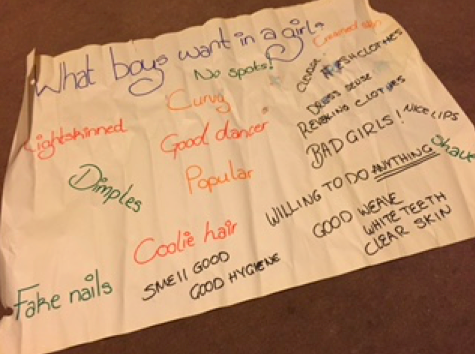 In the course of the session the girls became very close and as they started to open up, I asked if they would be willing to write something about themselves. I wanted just a few lines that described who they were. The task that they had been given became the focus of discussion for the remaining time of the sessions. It promoted questions such as, “What should I write, Miss?, “Who is going to care what I say?”, “I am not sure that I have anything to say and this is really hard… do I have to do this?” It was noticeable that the girls were less confident than I had previously thought and required lots of reassurance to write a few sentences. The feedback from the girls was really positive. The girls believed that the group should be available once a week as part of an empowerment programme.