When my artist friend Mary Yacoob excitedly emailed me a link to ‘bic for her’, the new pen for girls and women, after I’d checked it wasn’t April Fools Day, I started to worry about her sanity. Happily she reassured me that she also found the idea offensive but that I should check out the reviews. This little pack of pens has garnered a massive 288 customer reviews on Amazon, compared to just 9 for a standard bic pen multipack. The reviews are funny and angry at the same time. Saddler1993’s pithy review is typical, “I think this is possibly the best thing to happen since my Great Aunt Maisie chained herself to John Menzies in the ‘Drawing Pins For Women’ campaign of 1922. God bless you girl…. how far we have travelled!” I share a few of my favourite reviews here but if you’re ever bored in the office or the classroom or anywhere else, I’d recommend working your way through a few of them, they range in style from Victorian romance to dystopian science fiction.

The strand of reviews I enjoyed the most are from women who mistake bic for her for something other than a writing implement. Since bic make razors, a few people report trying to use them on their legs. Just a girl!!! combines this gag with a pointed critique of shaving and its role in producing the gender binary (“slicing off of goosebumps seem mere collateral damage in my quest to appear feminine”). Alternatively, Purchasingbot4000 moans “This product was too difficult to use!!! How does it tell me whether I’m pregnant?! I wasted a whole pack trying to figure it out. Like everything that isn’t haircare, this is too complicated for a girl to understand.” Sqirlgrrrl ate them: “Delicious and nutritious! Chock full of folic acid and calcium. Not too many calories, though. Ate a whole box yesterday for breakfast. Taste like strawberry licorice and oppression.” While she was alone in ingesting this product, a more common misuse is captured in this review by the wonderfully named Mr Spluffypants: “I tried these on a whim, and I have to say I wasn’t very impressed. The applicator mechanism is far too fiddly, and the plastic tampon inside far too thin (not to mention uncomfortable and non-absorbant) – I’m sure there must be a knack to using them, but I couldn’t find it. They also stained my knickers blue for some reason. I really wanted to like these, but it’s back to pads for me.” Many people struggled to find where to insert the battery, as Kyberia complains “The length of the pens is fine, but I found the girth somewhat lacking, and there is no option to select different speeds. … Not sure why they sell them in boxes of 12. Don’t think I could handle that.” Kitchenwench tried many different uses without success: “I was recently given a box of these as a gift from my husband, but I have no idea what to do with them! They’re too thin to make a good rolling pin. I can’t ladle out my soups with them. And the tiny point doesn’t even make a dent when I try to use one to chop veggies! I don’t get it. If I can’t use it in the kitchen, what the hell am I supposed to do with one???” You can’t help feeling her pain.

A smaller but equally creative strand of reviewers produce some lovely tributes to great women writers. Delirious damsel references Jane Austen: “Reader, I bought them. For it is a truth universally acknowledged that a single woman in possession of a vacuous mind must be in want of a Bic for Her pen. THE END.” And, L Summer references Virginia Woolf: “Sisters! We have been misled by society for too long. We need £500, a room of our own, and THESE PENS. Shakespeare’s Sister would have taken the world by storm if she’d had them. Buy them immediately and smash the patriarchy – one love heart dotted 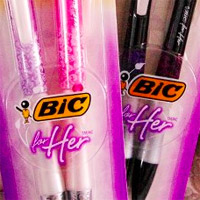 ‘i’ at a time.” While it seems from her contribution that Laura Levin Woolf is Peggy Olson from Mad Men’s online pseudonym: “I work in a big Madison Avenue advertising firm. I started out as a secretary, but my dream was to be a copywriter. One day I got my lucky break, writing copy for lipsticks in my spare time, and I was on my way! But no matter how good my ideas were, and no matter how hard I worked, I just couldn’t get the respect I deserved! Then one day, a glamorous, experienced, older woman gave me some really neat advice. “Listen,” she said to me, “You’ll never get anywhere trying to write with one of the boys’ pens. What you need is a woman’s pen. It’s a powerful implement when used correctly.” So I got up the courage to ask our office manager to order me the Bic for Her woman’s pen, and it has changed my life! Thanks to the pretty pink color, and how curvy my writing’s become, I’m getting all kinds of great accounts! Cold cream, bras, even weight-loss devices! Sure, I still don’t really have a husband, or a worthwhile boyfriend, but maybe next year! Thanks, Bic!” If you don’t get this then watch the show! Some people are less effusive in their praise than Laura/Peggy. They express their pleasure in these adorably coloured pens but wonder about how they’re supposed to use them without any lady paper to go with them. There’s also some discomfort with the pens’ ink colour (it’s the manly black rather than pink or purple they desire), their uniformity (what about different colours, glitter…?) and their shape. As Liz Upton puts it in a slightly disturbing post: “I do not feel my feminine needs have been met by this new invention. I am thrilled that Bic has recognised that the harder, manlier colours such as blue and black are best avoided by we members of the weaker sex in case we sprain something. But I feel that considerable work needs doing by the manly boffins in the R&D department if we ladies are not to be alienated and frightened by the frankly *phallic* shape chosen for this device. Just the other day I had an encounter with another pink object of roughly this form factor. I haven’t been the same since.”

Liz’s contribution notwithstanding, so far, I’ve concentrated on the more flippant and salacious reviews here. But before ending my round-up I should mention the many users who comment on some of the more serious side effects of these pens. Some men, like lumberjack daveyclayton were not able to use the pen, it “slips from between my calloused, gnarly fingers like a gossamer thread gently descending to earth between two giant redwood trunks.” However, Stephen Cummins, one of the many men who can hold and write with this pen, reports that: “Before I started using this pen, I was a typical male: unable to express any feelings beyond hungry and horny. Now I have a more expressive and nuanced view of myself and of others. Now, I do not have to ask my wife what is wrong because, thanks to this pen I SOMEHOW KNOW. I have become more open, and can listen better. Thank you bic, I love you.” Many men, like him, write movingly of changes in what they write and what they wear. On the upside, an author who has always struggled to write authentic female characters finds his problems are solved. On the downside, these online accounts show that this pen has wrecked more than one man’s relationship. For women, it has opened up a whole new world of literacy, bringing new career opportunities and marital prospects. But perhaps, most remarkably of all, ellie found bic for her reverses the menopause and she’s now pregnant with triplets. What other pen can do that?